Having been involved as a publisher and as an editor in commissioning translations, I know what a difficult job it can be—and how the best translators are seeking a kind of truth about the words and the work so that they can convey it properly.

Every once in a while I’ll get questions about my novels from a translator commissioned by a foreign language publisher. I value these interactions because translators have to be careful readers. I tend to learn something about my own work. Sometimes, too, a translator will find an error, which I can then correct in the English-language editions.

Recently, Cristiana Mennella, the translator for the Italian edition of Annihilation, emailed me a series of questions. She needed, she said, to “make sure that I got everything right to do justice” to the book. While completing translations “all sorts of doubts come to mind…I don’t know if other translators do the same as me (meaning: are a nuisance like me), but I really need to get attuned to your writing as much as I can, also in anticipation of Authority…”

It’s not a nuisance at all, but a blessing—as it is any time you get to correspond with someone immersed in something you’ve written.

But I did think it might be interesting to readers to have a sense of what questions translators ask. So, with Mennella’s permission, you’ll find the bulk of her questions and my replies set out below.

Annihilation and the rest of the Southern Reach trilogy will be published by Einaudi in Italy. 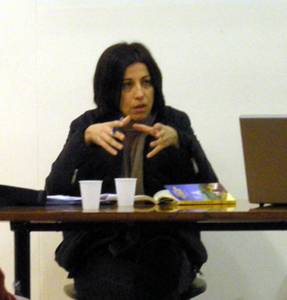 I saw that, throughout the book you often use the word “fuzzy” “fuzziness”. Could you please explain if you mean simply something blurred, or else, or more?

Good question. I guess it depends on context, and if I use it too much, I should probably cut a few. If you could give me examples of a couple you particularly were wondering about?

If you walked along the beach, riddled through with the holes of fiddler crabs, you would sometimes look out to see one of the *giant reptiles*, for they, too, had adapted to their habitat. (p. 12)

I mean alligators, really, but given so few things are named and alligators tends to mean “Florida” to people here, I did not get specific.

We did not feel confident taking our attention from the boar to *untie the container of handguns from our gear* and open its triple locks. (p. 16)

There are guns in a separate case that has been tied to their backpacks.

“Interesting,” she said in a flat tone *as she loomed over us*, wiping the cobwebs from her clothing (p.28)

This is one of the few indicators that she is both taller and larger than the other members of the expedition. So she is towering over them a bit. But towering is too dramatic.

The first thing I noticed on *the staging level* before we reached the wider staircase that spiraled down… (p. 41)

Basically, the tower opens up on to a level before the main staircase that winds down below. She’s calling it a staging level, like the level at which you would collect your thoughts and make your plan, before going further down?

Bullfrogs moved in, the wriggling *malformed dots* of their tadpoles always present. (p. 44)

Tadpoles are malformed dots because they’re like dots with a tail attached to some degree. And since I’m continually making the reader think twice about what they’re reading, it’s better to say “malformed dot” than “they looked like commas” or something like that.

Inevitably *my focus netted from* my parents useless lectures of worry over my chronic introversion… (p. 45)

Things only I could see: That the walls *minutely rose and fell* with the tower’s breathing. (p. 48)

She can only barely see that the walls rise and fall, like a person’s chest while breathing, for example. Just barely, just a hint of movement.

I imagined the surveyor could not see it at all. *In no scenario could I imagine the anthropologist alive.* (This symmetry between the two “imagine” should be mantained? Secondly, “in no scenario etc…” means “it was no longer possible for me to imagine that the anthtropologist was still alive”?

I don’t think you have to maintain that symmetry, although it is intentional. Part of the kind of deliberate way the biologist describes things does include intentional repetition, as if she’s linking things that way. And yes—she doesn’t believe the anthropologist is alive. Or could be alive.

I had spent most of my time becoming familiar with the *natural* transitional ecosystems, with the flora and fauna and the cross-pollination I could expect to find.

I think you can just cut natural as repetitious.

Some part of the brightness wanted to return to darkness at once, and *the logic of this related to nerve, or lack of it*. (p. 83)

She’s saying if she had the nerve and listened to what the infection told her, she’d go right back down into the tower. That there’s a kind of logic to that, but it’s connected to her gathering her nerve or gathering her courage to do so, on some level.

Despite my attempt *to sustain the aria in my head*, I experienced a jarring return to reality as I worked through these possibilities (p. 92)

Just that she feels like there’s music playing as she’s walking because she’s kind of in a state of ecstasy, although a close reading should make it clear this is because of the infection.

Then, too, that other effect of the spores, the brightness in my chest, *continued to sculpt me as I walked*,

She’s being changed by the brightness, she’s changing. Sculpt to make connection to the people who have been totally transformed.
p. 115 At night, now, *their outliers* try to creep in through the gaps in our wall defenses.

Advance guard, so to speak

p. 124 A *rough wheeze* again, and the film of confusion… (is it like she is softly laughing again, as in “she said with a wheezing chuckle”, a couple of paragraphs above?)

Yes—a wheezing chuckle is rough, though. A wheeze as of allergies and of course, of blood in her throat.

p. 125 Perhaps I should have left the psychologist alone, let her die without providing any answers, *but I could not find that level of grace within me*.

She can’t find the kindness to just let her have the dignity of her death without an interrogation.

p. 135 Surveyor needs *reinforcement* (is it reference to the behavioral/motivational theory?)

p. 149 There should have been an *awareness of comfort* at being spared the pain of my wounds, *but I was being haunted in my delirium*.

She should’ve been fine with not feeling any pain, but the delirium accompanying it is giving her odd visions.

p. 158 and so I fought it because I had work to do first. This work might also, if I was left to it without *any strange intercession*, put everything in perspective

p. 159 *Feed Area X but do not antagonize it*, and perhaps someone will, through luck or mere repetition, hit upon some explanation, some solution, before the world becomes Area X.

Feed as if the expeditions are human sacrifices.

p. 164 Afterward, they dragged the bodies from the landing and buried them *high up on the beach* a little distance from the lighthouse.

The beach has the sea oats and bluffs more or less before you get to it—so you’re walking down through sand dunes. And up to them.

With reference to the word INITIATION (the title of the first chapter). Is it just another way to say “beginning”, just rhyming with immolation, integration etc., or are you also meaning that the biologist is being “initiated” to the Tower?

Like an initiation ceremony. Definitely a rite or ritual-based meaning. It can also of course mean beginning, but a word that invoked ritual too is useful.

p. 27 *“Paralysis is not a cogent analysis?”* she said to me with a pointed stare. … It was only later that I realized the psychologist had tried *to bind me* with a hypnotic suggestion meant for me and me alone

The first bit could be interpreted as “being frozen is not a good way to deal with this,” but it’s really supposed to be an unusual phrase for hypnosis purpose—it could also make sense but an almost-sense is fine. “Bind me” is like being bound by a spell. Trying to continue to use the jargon of the supernatural to describe what may be entirely natural.

A riff on “broadsheet” but also the idea that topics like religion, etc., are “broad” compared to the “small” talk of talking about the weather. Just made up, though, so whatever works.

p. 166 My husband refused because he suspected from some of the readings *in the journal* (in the journals?) that “this idea of return through the same means as our entry might in fact be a trap.”

p. 168 After reading the journal, I was left with the comfort of *that essential* recurring image of my husband putting out to sea in a boat he had rebuilt

Immutable? Like, this final image frozen in her head. Something that captures the heart of him.

p. 169 Not coincidentally, by nightfall, the brightness was *thrushing up through my lungs and into my throat again* (like something fluttering in her lungs?) so that I imagined wisps of it misting from my mouth. I shuddered at the thought of the psychologist’s plume, seen from afar, like a distress signal. I couldn’t wait for morning, *even if this was just a premonition of a far-distant future*

No. Thrushing to me would be more like a wave almost physical in terms of the sensation, pushing up through. Thrushing is my own made-up construction, though. So you could go to pushing. But “thrushing” also to connotation “thrashing”, “a thrush” and thrush, an infection of the mouth by a kind of fungi. So almost the physical sensation of a bird “thrushing” up through the throat.

She’s seeing the green flame as a harbinger of her own future, her own fate.

p. 169 I had generations of expeditions that *had ghosted on ahead of me*

They went on expeditions before her.

p.172 *Give back to that which gave to you*, (are you quoting someone or…) came the thought, not knowing what I might be feeding, or what it meant for the collection of cells and thoughts that comprised me.

Nope. But the suggestion that she’s suggestible by Area X.

p. 177 a kind of echo of an arm in *constant blurring motion*, continuously imparting to the left-hand wall a repetition of depth and signal that made its progress laboriously slow—*its message, its code of change, of recalibrations and adjustments, of transformations*. (slow progress: i.e. slow message, slow recalibrations, adjustments….etc?)

Think of a hummingbird’s wing re the blurring motion. As for the other, its progress is also its message, because it is going slow because it is writing.

p. 181 … then the pain distributed like a second skin inside *the contours of my outline*.

Almost like she’s wearing another skin under her real skin, a sensation like that. Really, she’s describing pain in the deep epidermis.

p. 182 …With nothing to lean against, I fell like a sack, *crumbling before something that was never meant to be, something never meant to invade me.* I sucked in air in great shuddering gasps.

Crumbling with awe or exhaustion faced by the unknown, by something that she feels is not real in some way, and referring back to the fact she was infected early.

9 comments on “Annihilation: The Questions a Translator Asks”