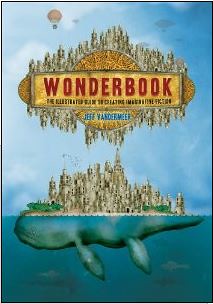 SF Signal posted the table of contents for my forthcoming release Wonderbook: The Illustrated Guide to Creating Imaginative Fiction today (out October 15 from Abrams Image). The listings for the main text, instructional art, and sidebar text by other writers is so extensive that going into the artwork more deeply was just impossible, so I thought I’d do that here.

In addition to Jeremy Zerfoss’s original art and diagrams (about 150 individual pieces) and author photos for sidebar essays, the following artists and photographers are represented in Wonderbook. Many have multiple pieces in Wonderbook. If someone known only for their writing is listed, I’ve put the nature of their artistic contribution in brackets. If the art was commissioned specifically for Wonderbook, I’ve put an asterisk by the name. The artists are primarily from North America and the U.K., but also France, Finland, Spain, Serbia, and Poland, among others.

Wonderbook is the world’s first fully illustrated writing books, and one of the only general writing books of use to any writer that takes its examples from fantastical rather than mainstream literary sources (although those are in there, too!). There’s an example of a page spread below, and a few more sneak peeks in this blog post. I’m not sharing much of the unique diagrams for now, though. 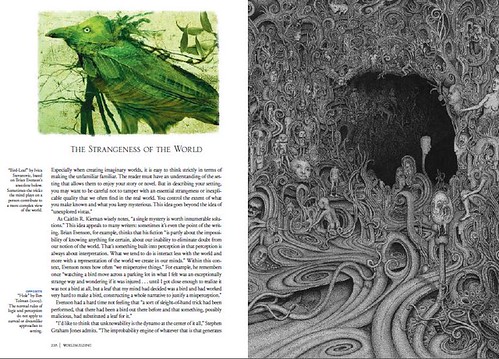 (Original art for Wonderbook by Ivica Stevanovic on left and Ben Tolman art on the right; also a typical non-diagram page spread)