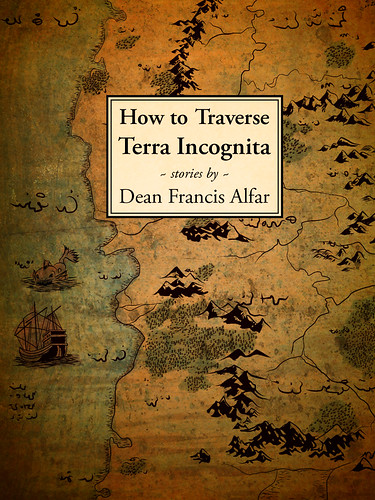 is now available on Amazon and elsewhere in e-book form. The book comes with blurbs from such luminaries as Hugo Award winners Ann VanderMeer and Lynne M. Thomas, among others.

Not familiar with Alfar? Here’s what you need to know.

Alfar is a Filipino playwright, novelist and writer of speculative fiction. His plays have been performed in venues across the country, while his articles and fiction have been published both in his native Philippines and abroad, such as in Strange Horizons, Rabid Transit, The Year’s Best Fantasy and Horror and the Exotic Gothic series. His literary awards include the Don Carlos Palanca Memorial Awards for Literature and then Manila Critics’ Circle National Book Award. He is an advocate of the literature of the fantastic, editing the Philippine Speculative Fiction series, as well as a comic book creator and a blogger. Alfar is also an entrepreneur who runs several businesses. He lives in Manila with his wife, fictionist Nikki Alfar and their two daughters.

So here’s a proposition for you, since I’m a big fan of Alfar’s work. Below the cut, Alfar is allowing me to post “Enkantong-bato,” his entry from the bestiary anthology Ann and I are editing—totally new fiction, not found in the collection, free for you to read. Exclusive to this blog post and only available here for the next month. BUT, if you read and enjoy it, please do me favor and go buy How to Traverse Terra Incognita. The fact is, you’ll actually be doing yourself a favor!

On May 16, 1965, the annual dinner of the Philippine Society for the Advancement of Science was disrupted by the unexpected arrival of Professor Angelo Lim-Diokno, thought to have fallen to Japanese bayonets during the Siege of Manila almost two decades ago. The stunned intelligentsia could only watch as the stooped man, his wrinkled skin the color of dried betel nuts, climbed the short steps up onto the stage and with a trembling voice that belied his age made the following announcement:

“I have found the Enkantong-bato!”

His voice, amplified by the sound system, had barely completed a round of echoes in the hall when he raised his right arm as high as his strength permitted. There in his hand rested what seemed to be a large stone of a startling variety of hues. The harsh light of the stage revealed crystalline formations protruding from the stone-like steps – and as Lim-Diokno extended his hand toward the skeptical audience, the stone moved, flexing its sparkling arms in different directions like a gemstone sea urchin. Whatever else Lim-Diokno had to say was drowned by the spontaneous standing ovation that followed his dramatic presentation and the human wave of scientists that proceeded to envelop him and his precious specimen.

Lim-Diokno’s story of his miraculous escape from the Japanese, the complex series of events that led to his new life as a guerilla on the island of Panay in the Visayan portion of the archipelago, and his subsequent storm-tossed return to the capital, were eclipsed by the excitement elicited by the treasure that he had brought back. What he held in his hands was a living Enkantong-bato (“Enchanted Stone” translated from the Filipino), a creature wrenched from the depths of legend.

In the oral traditions of the Visayan islands from the time of heroes, there are multiple accounts of a living stone whose crystalline protuberances were responsible for a variety of seemingly magical effects: among the most famous stories were those of Banna of the Calingga, who possessed an axe said to be given to him by the gods – its blade was made from the crystals of the Enkantong-bato; Labaw Donggon of the Visayas, who was famous for the Enkantong-bato that bestowed supernatural sight upon him; and Prince Bantugan of the Maranao, whose supernatural servitor Magaw took the form of floating glittering fragments.

Spain, which conquered the archipelago, installed the Christian faith, and held the country for three hundred years, was never able to completely eradicate these wonder tales, despite the best efforts of priests of various orders. Despite conversions and Catholic rituals, Filipinos continued to tell each other the stories of the past age, and the legend of the Enkantong-bato was preserved.

All accounts agree on its appearance, describing the step-like arms that protruded from the stony exterior. Most agree that it was a living creature, similar to the crab or snail, housed by a rocky exterior of surprising beauty. But no one had ever seen one alive.

In 1822, while directing the construction of the Church of the Holy Family in Cavite, Luzon, the Dominican frayle Augusto Ibarra de la Cruz reportedly found a fragment of an Enkantong-bato. According to church records, the specimen consisted of a portion of the stone shell and five crystal arms, the longest of which extended over four inches in length. When the structure was completed a year early, rumors swirled around the area regarding the power of the fragment. When the church authorities came to investigate, however, the specimen had vanished, and frayle Augusto Ibarra de la Cruz along with it.

The Enkantong-bato surfaces next during the Spanish-American war. In the end, the Americans were able to wrest the nation from Spain, but a tragic occurrence during the Battle of Manila Bay at the very start of the war threatened to maintain Spanish sovereignty over the Philippines. On May 1, 1898, the obsolete and undermanned Spanish Pacific Squadron commanded by Admiral Patricio Montojo y Pasarón faced the American Asiatic Squadron under Commodore George Dewey on board the USS Olympia. In column formation, the American warships engaged the Spanish at close range. By the first two cross runs, the Spanish defeat seemed a certainty. However, a sudden explosion below the crew’s quarters rocked the USS Raleigh, one of the vessels under Dewey’s command. The succeeding blast lifted the entire ship out of the water and rained debris for hundreds of yards around. Within minutes, the battleship sank. Dewey quickly assigned the USS Boston to rescue survivors in the water and proceeded to complete three more cross runs, eventually obliterating the Spanish fleet. The explosion that claimed 223 United States sailors remained a mystery to the victorious Americans, but rumors that the Spanish Admiral possessed an Enkantong-bato made the rounds in the liberated capital.

During World War II, when the Japanese invasion forced General Douglas MacArthur and his troops to abandon Corregidor Island and retreat to Australia in PT boats, there were accounts that the Japanese victory over the United States Army Forces in the Far East (USAFFE) was facilitated by their discovery and consequent weaponizing of an Enkantong-bato.

In July 1965, Professor Angelo Lim-Diokno, under intense pressure from the Senate President Ferdinand Marcos, agreed to surrender his prized possession to the government, for “the sake of posterity”. Unknown to Marcos, Lim-Diokno, hearing of the plan to deprive him of the enkantong-bato, convened a small group of scientists and proceeded to surgically examine the creature over several frantic midnight sessions at the Philippine Science Institute in Manila. Their findings were then secreted away, and Marcos was given only the shell of the creature. Lim-Diokno and his colleagues then vanished from the historical records. Marcos, who became the President of the Republic of the Philippines in the same year, was rumored to have used the remains of the creature to perpetuate his wealth and power. It was said to have been the basis for his “hidden treasure”. But all the supposed abilities of the Enkantong-bato could not perpetuate his dictatorship, which ended with the People Power Revolution of 1986. Exiled in Hawaii, Marcos died on September 28, 1989 of various internal ailments.

The scientific record of the Enkantong-bato remained hidden throughout the next decades, surfacing only in September 2010 during the presidency of Benigno Aquino III. Published by the University of the Philippines Press, “Enkantong-bato: Truth” became a national bestseller.

The 1965 findings included the discoveries that the Enkantong-bato shared certain zoological similarities with the Carcinoscorpios rotundicauda, the mangrove horseshoe crab, enough for it to be considered an arthropod. But while both species are protected by a hard shell, the Enkantong-bato’s stony exterior was revealed to be a mix of silicate minerals, combinations of silicon, oxygen and calcium, with the colorful protrusions consisting mostly of bismuth. Samples of its blood tested highly for vanadium instead of iron, explaining the blood’s rich green coloration. The specimen had two large compound eyes and multiple smaller ones atop the exoskeleton, and five pairs of stunted legs behind which rested book gills for exchanging respiratory gases. The scientists noted the existence of a thoracetron in its free abdominal segments. Unlike the horseshoe crab, it possessed no tail.

And unlike its storied history, it indicated no preternatural abilities.

The resurfaced findings did little to diminish the Enkantong-bato’s mystique.