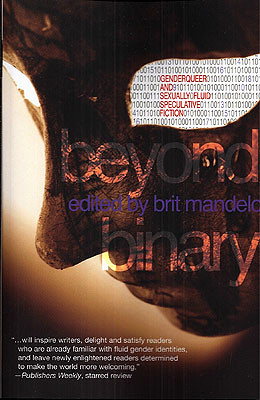 Over at Omnivoracious.com you’ll find my feature on the excellent anthology Beyond Binary, including quotes from an interview I conducted with editor Brit Mandelo. Go check it out and recommend it to your friends! And below you’ll find Mandelo’s full answers to a couple of the questions; I couldn’t include everything due to length considerations.

What do you think makes SF/F ideal for exploring ideas and issues related to gender and sexual identity?

I think that the astounding range of possibilities speculative fiction offers for asking vital questions, reinterpreting or discarding contemporary mores, and breaking boundaries is what makes it ideal for exploring issues of gender and sexuality. SFF not only allows us to ask “what if?,” it also allows us to make real whatever we can imagine—the very nature of the form, as a literature of extrapolation and invention, opens up a field of discourse where everything has potential and anything is possible. This nearly unlimited ability to explore, expand, and explode definitions makes speculative fiction the only form that can effectively transcend and truly embody an equally vast multitude of potential gender and sexual identities.

In the same vein, Joanna Russ’s argument for speculative fiction is one that resonates with me, too, and I tend to quote it when asked a question like this. She said, “science fiction […] provides myths for dealing with the kind of experiences we are actually having now, instead of the literary myths we have inherited, which only tell us about the kinds of experiences we think we ought to be having.” In SFF, we can deal authentically with issues of identity and self in a way that is often effaced or barred from traditional literary forms; being able to twist and restructure reality in narrative is a powerful tool for social criticism. In fact, I’d say that the tools for social criticism are natural to and almost inseparable from the same narrative machinery that drives speculative fiction to begin with—that willingness to ask questions, to imagine, and to invent worlds that are not quite like our own. Speculative fiction, then, offers a golden opportunity for folks whose stories are often silenced to encompass their narratives, their identities, in a form that is—in a lot of ways, though this is a whole different argument—itself a sort of outsider literature.

I’m curious as to what kinds of effects stripping out gender referents has on fiction, in your opinion?

When done well, it can destabilize narrative assumptions about gender—and, even more so, reader assumptions. When we begin reading a story, we make assumptions based on hints and clues from the narrative, yes, but also based on our own implicit worldview. I’m as guilty of this as anyone; it’s just a way that we make meaning during the reading process. But, when a story manages to sidestep gender referents and craft a narrative not mediated by explicit gender, that’s something special: it forces the reader to step back and check their own assumptions about character gender, and destabilizes the assumption that everyone presents a specific gender. The thematic force of a narrative that rests on an agendered, neutrois or un-gendered person can also be pretty stellar, challenging mythologies of gender performance and the binary of male/female that the English language so commonly subscribes to. (And, on a craft level, writing without gendering a character is a pretty thrilling display of technical mastery. It’s hard to overstate the control and precision required to write, and write well, without pronouns or gendered language.)