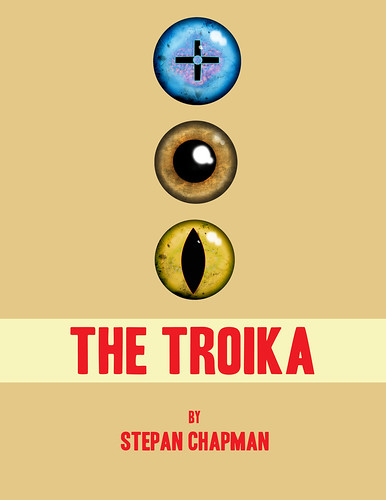 Stepan Chapman’s incredible 1997 novel The Troika, winner of the Philip K. Dick Award, is now once again available to readers—in e-book form. Originally published by my Ministry of Whimsy Press, this new, definitive author’s version has been published as a joint venture of Ministry of Whimsy (now an imprint of Neil Clarke’s Wyrm Publishing) and Cheeky Frawg. Neil has a post about how to order it. (Thanks to my Ministry partner back in 1997, Tom Winstead, for making it possible to publish the book.)

When it came out, the novel was perhaps the most reviewed science fiction novel of the year, garnering a ton of critical praise. It was also the first independent press title to ever win the PKD Award. Beneath the cut, find a teaser from my original introduction to this new e-book edition…

INTRODUCTION: The Resurrection of a SF/Fantasy Classic
Jeff VanderMeer

Stepan Chapman may well be one of North America’s last true fabulists—a storyteller who mixes myth, science fiction, fantasy, and the surreal into a rich tapestry of dark, ironic, and darkly humorous stories. His first story, bought by the legendary John Campbell, was published in the December 1969 Analog SF Magazine, followed by four appearances in Damon Knight’s prestigious Orbit anthology series. More recently, Mr. Chapman has published stories in a number of prestigious literary magazines and avant garde publications, with a chapbook Danger Music (Ten Fables) and a collection Dossier.

But his most famous creation is the novel The Troika, which received wide-spread critical acclaim and won the Philip K. Dick Award after being published by my Ministry of Whimsy Press in 1996. I first read the novel after Chapman submitted two parts of it as stand-alone stories for the Leviathan anthology series. The first segment made no sense out of context but I still felt it was brilliant and asked to see more. The second, “The Chosen Donor,” made it into the first volume of Leviathan and at that point Chapman revealed it was part of what he called “my unpublishable novel,” rejected by over 120 publishers. He then sent me The Troika to read.

Daunted by the prospect of an “unpublishable” novel, I was somewhat leery about reading it, even though I’d loved the excerpts. But before I knew it, I had read through the first three chapters. Then six chapters. Then nine chapters. In short, I finished The Troika in one night–I simply couldn’t stop reading it. When I had finished, I sat back in disbelief—disbelief that the manuscript had not interested even one publisher (something of a literary crime, in my eyes). Added to my disbelief was the cover letter Mr. Chapman had attached, to the effect that eight of the 17 chapters had been published in very prestigious literary magazines and genre anthologies. Since The Troika , to my mind, worked best as a novel rather than a series of short stories, it seemed inconceivable (ridiculous, actually) that Mr. Chapman could not find a publisher!

Simply put, The Troika is a tour de force of sustained surreal science fiction—influenced to some degree by manga—and contains some of the most audaciously imaginative passages I’ve ever had the pleasure of reading. Although the mordant humor of the novel invites comparisons to Joseph Heller and Terry Southern, it is uniquely “Chapmanesque” in its fusion of mythology, psychology, and the afterlife. Some scenes are magnificent break-neck narratives, while others are whimsical, dark, and shot through with pathos.

The Troika is also that rarest of birds, a truly visionary novel of the surreal that never loses sight of its main characters’ lives. In this case, those characters happen to be a robotic jeep (Alex), a brontosaurus (Naomi), and an old Mexican woman (Eva). If that sounds strange, consider this: the troika is trudging across an endless desert lit by three purple suns. Not only has their journey lasted hundreds of years, but they have no memory of their past lives, and therefore no clue as to how they came to walk the desert. Only at night, in dreams, do they recall fragments of their past identities. To further complicate matters, sandstorms jolt them out of one body and into another (a game of metaphysical musical chairs): Eva falls asleep a Mexican woman only to wake up a jeep.
The novel alternates between dream-tales about the troika’s former lives and their present-day attempts to discover where they are and how they can get out. From this quest form, Chapman has fashioned a poignant and powerful story of redemption in which pathos is leavened by humor and pain is softened by comfort. It is the story of Alex who wanted to be a machine. It is also the story of deranged angels, deadly music boxes, and of the love and desperation that can bind people together.

Buy the e-book to read the full intro!