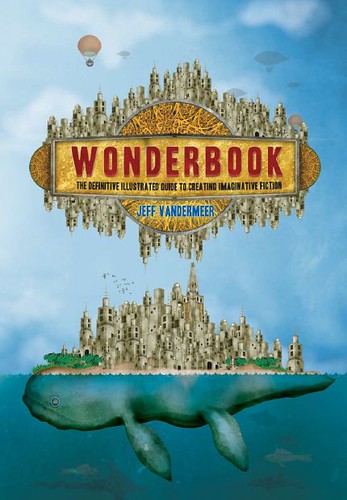 My WONDERBOOK: The Illustrated Guide to Creating Imaginative Fiction for Abrams Image is well on its way to being finalized, with publication set for 2013. This will be the first creative writing guide that doesn’t just supplement text with images, but replaces text with image. In fact, its 300 pages will include over 175 diagrams, illustrations, and photographs. The diagrams will be radically different from what you find in most writing books, and the integration of the text with image will also be something you haven’t seen before.

The cover above is a rough, but close to being final—it’s by Jeremy Zerfoss, who is doing the majority of the art, and the design of the book. The image below is an example of one of the ways in which this approach can be useful in teaching creative writing. Writer and filmmaker Gregory Bossert is planning to create an animated tutorial around the prologue fish.

The main text will include chapters on Inspiration, Elements of Story, Beginnings & Endings, Writing & Revision, The Bleeding Edge, and a special chapter on writing exercises that I think will blow most people’s minds visually—and will set out all of the things my wife and I do in our workshops and masterclasses. Elements like Characterization will be woven into the discussion in all of the chapters, since separating out the people from the story seems pointless to me.

In addition, the book will feature short essays on a variety of writing-related subjects by Neil Gaiman, Lev Grossman, Karen Joy Fowler, Lauren Beukes, Charles Yu, Karin Lowachee, Catherynne M. Valente, Michael Moorcock, and several others, as well as a long exclusive discussion about craft with George R.R. Martin. A comprehensive list of over 700 essential non-realist novels is just one item of interest in the appendices. The format of the book will allow annotations and asides in the margins for additional value.

Another unique aspect of the book is that it makes no distinctions between artificial boundaries between mainstream and genre, and it takes as its foundation fantastical literature. Which is to say, Wonderbook will be of use to any beginning or intermediate writer, but assumes a default of the fantastical. On facebook awhile back I indicated I was trying to create a new visual language for teaching creative writing. In retrospect, that was a grandiose claim. But I do think we have accomplished something special regardless. 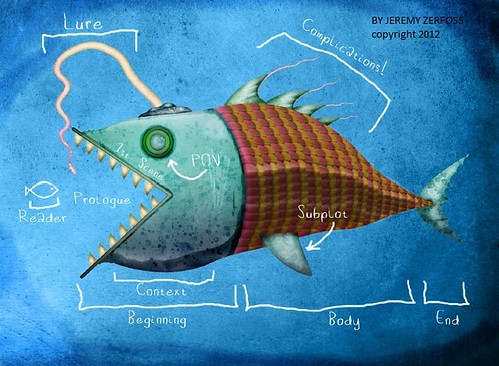 6 comments on “Wonderbook: The Illustrated Guide to Creating Imaginative Fiction”