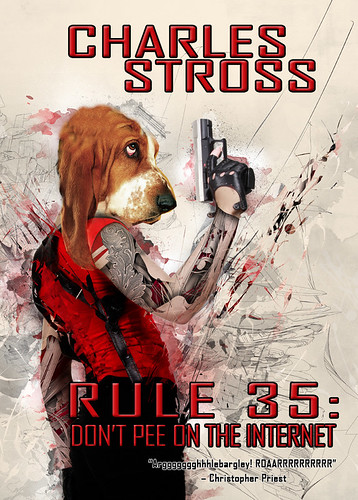 Huh. Interesting. Orbit will be releasing Rule 35 from Charles Stross. According to Alex Lencicki at Orbit, it’s a “limited edition 150-copy remix” of Rule 34, the novel that just made the Arthur C. Clarke Award finalist list.

From the press release: “Stross’s futuristic detective novel is being enhanced by the addition of another viewpoint character known as The Cyber Curmudgeon, who has a twitter handle of PissOffMyLawn, infects cyberspace, watching from afar: a voyeur of the action, almost like a one-man Greek Chorus, with a catch phrase of ‘I might have a point!’ The Cyber Curmudgeon’s taunting infuriates another of the novel’s characters and complicates the job of DI Liz Kavanaugh. The remix proceeds from there. Here at Orbit we don’t want to divulge too much, but we’re enthusiastic about this incredibly imaginative new version of Rule 34.”

Special features of the limited edition:

—A deluxe hardcover binding made from the pulped remains of only the freshest, most recently remaindered novels by New Wave-era writers.

—A bookmark ribbon designed by Damien G. Walter that he will pre-soak in the tears of writers who never made it to the big table.

Rule 35 also will include a foreword by China Mieville entitled “Did Something Happen I Am Completely Unaware of While I Was Busy Writing My Next Mind-Blowing Novel?” and an afterword composed of the recently transcribed cursing of the writer Mark Billingham (a preview of his forthcoming book, tentatively entitled Listen, I Met a Total F—ing W—er At the Lit Fest).

Stross has apparently said he’ll split his earnings from the limited edition into contributions to two organizations: The International Foundation for Literary Judges with Post Traumatic Stress Disorder and the Save Our Curmudgeons League.