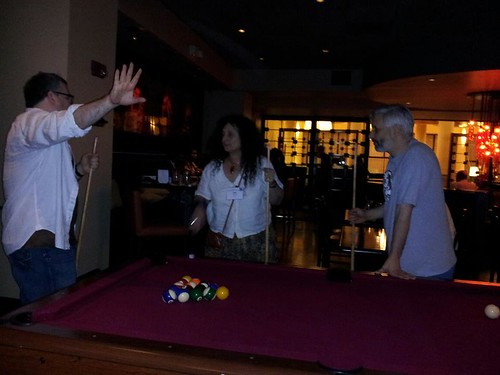 (I have no idea what I’m saying to Ellen Datlow and Jacob Weisman in this photo taken by Ann.)

We’re just back from the International Conference on the Fantastic in the Arts, and both Ann and I feel we had as much fun as we’ve ever had at a convention. There were points on both Thursday and Friday nights where I was sitting in the restaurant/bar section looking around at all of the amazingly creative people—editors, writers, scholars, artists—packed into such a small space and I just felt this incredible feeling of affection and love for everybody. A lot of the time, I have a natural inclination to position myself as someone on the outside looking in, and I can also be pretty cynical about the field, but I was getting a kind of 360-degree view of awesomeness that overwhelmed all of that. While Ann, Jacob Weisman, Ellen Datlow, and I are playing pool, there’s China in conversation with Ben Loory, Maria Dahvana Headley, and Nancy Hightower. There’s Peter Straub telling a joke to Jeffrey Ford while Charles Vess sneaks in a sly observation talking to Theodora Goss. Karen Lord walks in, yay! Kij Johnson and Kelly Link sit down next to us after pool. Karen Joy Fowler magically appears—I didn’t even know she was here, yay! Nalo Hopkinson, James Patrick Kelly, John Kessel. The mind reels. The dynamic Liza Trombi, Bernie Goodman, Gwenda Bond and Christopher Rowe, Steven Erickson, Genevieve Valentine, Merja Polvinen, Liz Gorinsky, a brief conversation with Andy Duncan (his new collection from PS Publishing is beautiful) and Sydney Duncan (who was one of the architects of the programming)…seriously, I’ll never be able to remember everyone my mind is so sieve-like these days, so apologies in advance. We had so much fun both nights in that space, although I had the thought more than once that if the roof fell in with so many amazing talents in the same place, fantastical fiction would be in real trouble.

During the con in general, having so many opportunities and little memorable moments, too. Talking shop with Gavin J. Grant in the dealer’s room, saying hi to Joe Berlant. Encountering Andrea Hairston in the elevator, congratulating her on the Tiptree. Sitting around the pool with Austin Sirkin, Rachel Swirsky, Michael Swirsky, and two from the Finnish contingent debriefing us on their surreal trip to North Korea. Lunches with Karen Lord (singing the praises of our mutual agent, Sally Harding) and Kit Reed and Ellen Datlow and more. An early breakfast with an animated China after a long night, feeling like we’re moving in slow-motion but glad to see someone who is chipper. Jeff Ford ominously saying “Monstrous creatures, man. Monstrous creatures.” Meeting Nick Mamatas’ family and having more time than usual to talk to Nick. Getting to know Kij Johnson and John Kessel better at a breakfast with (oh we know him well) Jacob Weisman. Talking to Charles Vess, who I enjoyed the heck out of. Being stopped in the hall by academics who wanted to talk about City of Saints or the Steampunk anthologies or any number of other things and having some great discussions. (Among several regrets: not bumping into Christopher Barzak, seeing Ted Chiang only from afar, missing Nancy Hightower’s presentation because we’d stayed up too late the night before, and sitting near a certain GKW at the pool, someone I don’t know very well, and stupidly letting a kind of shyness overtake me. Quite honestly, although I think people believe I’m outgoing, I’m an introvert and it takes a lot of energy to put myself out there. The truth of that kind of underscored by Jim Kelly pointing out at one point that I’d taken a seat next to an out-of-commission couch cushion marked as such by a huge sign; anti-social much?…I only thought of the best return line, of “why don’t you to sit on my lap then?” too late.)

One indicator of how much fun ICFA was lies in the fact that we stayed up until around 2am two of the nights; it’s been years since we stayed up past midnight at any con. It was all restorative, even the hangover….and it’s kind of strange but over the years at most conventions, you see people somewhat briefly or get spirited away into various recurring groups or have responsibilities because of anthologies out that preclude just sitting around and shooting the breeze, so there were people at ICFA we’ve seen for 10 or 15 years at various events and emailed a lot, but never really had the chance to talk for a bit, so that was really nice.

I think I also realized, after two years of not publishing much fiction, that lots of people do still indeed see me as a fiction writer, which was a relief. My reading on Thursday was with Nalo Hopkinson and Jeffrey Ford, introduced by the wonderful F. Brett Cox, and the room was packed. I felt incredibly privileged to read with that group, and also thrilled and energized by the reception to the excerpt from my novel “Borne” I read, especially that they laughed in the right places and didn’t laugh in the right places, too. I was still having people coming up to me and telling me how much they enjoyed it on Saturday. Which was a big boost of confidence. We’ve had our noses to the grindstone for so long now that we haven’t really come up for air in such comfortable surroundings for awhile. Not to mention signing books for people and getting to show off the advance copy of The Weird antho.

(Feeding into a burst of confidence and well-being: not only had I completed a short novel entitled Annihilation before leaving for ICFA, but Ann had read it on the drive down and loved it; I got to hear literal gasps of surprise at certain points, which was a first for me. And then arrived at ICFA to check my email and find my other first readers echoing the same reactions, with the same thoughts on minor tweaks.)

I also participated on a panel about reimagining the canon that I think went well, along with Jacob Weisman, Karen Burnham, John Rieder, and David Sandner. I’m afraid the dam burst and all of the excitement about The Weird antho came bubbling up so I talked too much (I really have to watch that when it comes to The Weird), but I hope it was at least entertaining. The sadness of taxonomy. The repatriation of the fringe with the core. The healing of the division between mainstream and genre. The necessity of seeking out international fiction. The need to test prior canon-creating anthos like the Dark Descent (focused but narrow) and Black Water (wide but wandering), both brilliant. The idea of canon as a constantly shifting thing, which made me think of canon as one central skeleton or line with other lines burning down to intersect and others shooting up out of the central line and off into the fringes. Relating some of the more hair-raising permissions stories. Was happy Terry Weyna came up to say hi afterwards. (Ann and I also got to talk about the Weird for a Locus interview, and it was fun to share some of the stranger stuff with Liza T, since she has an innate appreciation for and expertise in the in’s and out’s of publishing.)

Ann was on two panels, one on editing and one on copyright that went well; one at least will be a podcast on Locus online soon. (Although there were points during the editing panel where my inner Mord started to growl; alas, Maria and Nancy had to suffer hearing that blabbery rant afterwards.) We were also happy that a lot of people mentioned having visited Weirdfictionreview.com for our 12 Days of Monsters—our features apparently proved useful for more than one panel. We were also delighted that the IAFA posted something about the 12 Days on their site. Since we’d gone off and planned that in a kind of impromptu fashion, we were relieved that they seemed pleased. I’d also like to say we appreciated the organization of ICFA, which ran like clockwork as far as we could tell.

I must admit, due to time constraints we weren’t able to attend as many events as we wanted to, but from the great outbursts of enthusiasm when the attendees of the monsters luncheon with China Mieville burst forth from the banquet room, his speech about monsters was a huge success (and apparently will be published by IAFA in their journal soonish, possibly with an excerpt on Weirdfictionreview.com, if we’re lucky.) I’m sure other accounts will do a better job of reporting on the programming in general, and Ann might add her own impressions in the comments below as an addition to this blog post.

Anyway, in all ways we felt blessed to be at ICFA this year, after two years that had been filled with great projects, but ones that had ground us down a bit, and I think we’re going to try to attend every year from here on out.