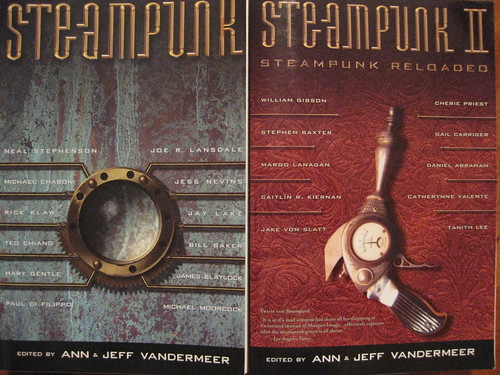 Steampunk Revolution, edited by Hugo Award winner Ann VanderMeer (co-editor of both Steampunk and Steampunk II: Steampunk Reloaded) to be published in the Fall 2012 by Tachyon Publications, announces an open reading period.

Steampunk Revolution features a renegade collective of writers and artists—including steampunk legends as well as hot, new talents—who are rebooting the steam-driven past and powering it into the future with originality, wit, and adventure. Going far beyond corsets and goggles, Steampunk Revolution is not just a ride in your great-great granddad’s zeppelin—now it’s a much wilder ride.

Looking for reprints only (standard reprint rates apply). Willing to look at all kinds of Steampunk fiction, but mainly interested in work that pushes the boundaries, that truly is a revolution to the genre. Prefer works under 10,000 words.

Submissions accepted between February 1, 2012, and March 1, 2012. Any English-language story previously published in the past decade on a website or print publication is eligible for consideration. Willing to look at all kinds of Steampunk fiction, but mainly interested in work that pushes the boundaries, that is truly a revolution to the genre.

Submissions up to 10,000 words should be sent in a Word or RTF document to steampunkrevolution at hotmail.com. Please cut-and-paste the first three paragraphs into the body of your email and include prior publication information, but no need to include any biographical information about yourself. If you prefer, use snail mail by sending your work to POB 38190, Tallahassee, FL 32315. Snail mail submissions should be marked on the outside of the envelope as for Steampunk Revolution consideration. No SASE is required if you prefer email response. All Submissions will be responded to no later than March 31; please do not query about a submission prior to that date.

Payment will be on publication, at standard reprint rates of one to two cents per word, against a share of any royalties from the North American and any foreign editions, as well as one contributor copy.