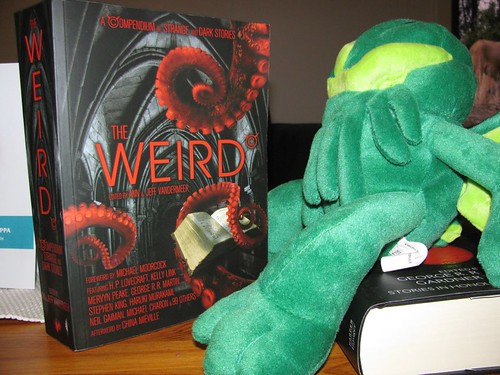 I found following along with Des Lewis’s real-time review of The Weird, in which he would read each story and then blog about it, before moving on, to be a fascinating experience. It’s not often that an editor (in this case, co-editor with my wife Ann) is privileged enough to get such a detailed, sympathetic, and informed read. It’s also an idiosyncratic read in some ways—a determined effort to find an underlying theme or meaning or commonality by a writer and editor whose literary interests are diverse and wide. If it skews, it skews eccentric yet universal. (In fact, eccentric because universal, given that people’s reading tastes often render something eccentric because their reading tastes are not universal.)

I was moved to want to write a post after Des finished for a variety of reasons.

First, that it was a heroic effort—to commit to reading so much and blogging about it, and that this deserved a tip of the hat. But more than that, to note that although The Weird has already had several reviews, only Des’s review contains the totality of the anthology and only a story-by-story encounter with the anthology really gets at whether or not it is of use, whether it has cohesion, etc. In doing this, Des was also sympathetic to the purpose of stories, was open to what they were trying to do, and displayed great sensitivity to the individual paragraphs and sentences in each story. (Which is not to say such sympathy meant he wasn’t willing to reject what he didn’t wind up liking.) This is rare, to be honest, in reviews, and although literary criticism does provide more of this kind of in-depth analysis, it’s in a different context. So I would argue that we need more *reviews* that are both in-depth and sympathetic. That display evidence that the reviewer has allowed the text to be not just at the center of their attention, but to have all of their attention. Which also leads to the observation that not every book deserves this kind of attention. (And, that anthology reviews in general, due to limited word count for many review venues, tend to be lacking and it is much more possible to skim an anthology and do a serviceable if surface review than to do the same with a novel.)

Second, that in encountering the stories from his perspective, Des performed a mitzvah for me, which is to say he made fresh stories I’d read and re-read so many times that I could no longer get the initial or even second-read thrill of discovery from them. Beyond the angle of approach, the sheer joy of that discovery infected me as well. In addition, I found myself re-reading the stories Des had just read and being able to find things in them that I had not seen before. Sometimes this was because I found what Des saw. Sometimes it was because what Des saw was thus taken out of my re-read, and what was left was therefore different. (I’m not expressing this particularly well, but I hope you get my meaning; when a roadway is closed off, in this case, due to familiarity, you must detour.)

Third, that in finding connections between the stories, he created connections between stories outside of the anthology that are part of our discovery phase for other projects. These other stories are ones that were already linked to stories in The Weird by theme, subject matter, etc. So in other words, his connectivity was not always ours, but now has become part of ours, where we agree (and we often agree).

Fourth, that in reading the anthology chronologically he uncovered synergies that seem to confirm that despite going by story date and not trying to find a different, more holistic order…the anthology often does read smoothly story to story…and also showing that by this very, unplanned effect those few cases where story following story is not smooth…a jarring effect can occur (noted for future books in which story order is chronological). It’s worth noting that until late in the process we did not know exactly which stories we would get permission to reprint, beyond a certain core number of stories, so we could not completely predict how they would fall one after the other. Nor, in putting together something so vast and something that was defaulting to chronological order anyway, had we done more than a rudimentary skim of the stories in rough book-order, even if we had some idea of the overall effect. We were more invested in the threads of groupings of stories throughout the book—for example, making sure that our “weird ritual” thread ran from the early part of the century through the beginning of this century. (And, of course, tactical thoughts came to mind—we wanted Tainaron by Leena Krohn to be a kind of antidote to Harrison’s Egnaro, for example.)

Fifth, that in many ways Des both clarified and justified my and Ann’s editorial approach while also revealing some hidden patterns in the subtext of stories that led to a deeper understanding on my part of why we had chosen the stories in the first place…which only improves and refines our approach going forward. But this last benefit to us of his review also confirmed that there are thematic and subject matter elements that are for anthologists much as they are for novelists. Inasmuch as I always talk about anthologies as being more like solving mathematical equations and writing novels as being something more like creating an animal…clearly my analogy needs some work.

As alluded to above, the basic function of most anthology reviews is to let readers know a book of possible interest is out, and to express how well or how poorly that book fulfilled its promise, from the reviewer’s point of view. The function is not to help the anthologist gauge the success or failure of their process, their depth of vision, etc., which is why I found Des’s review so fascinating. (This may seem to contradict the first statement about function, but it really doesn’t. The average anthology review doesn’t really get at the core reasons why a book works or doesn’t work. It doesn’t get to that particular level.)

The most basic emotion I felt, however, was a kind of pride of being part of a community, of a kind of writing that I love and that Des loves, and that in going over a century’s-worth of material receiving affirmation that the effort had been worth it. And also to thrill to Des’s connection to stories like Michel Bernanos’ “The Other Side of the Mountain” or Eric Basso’s “The Beak Doctor” or Leena Krohn’s “Tainaron” that are our distinctive addition to or re-introduction to the canon. That, in a sense, the real-time review confirmed that there was meaning and substance to our endeavor, and just feeling a profound sense of having done something useful.

…And I’ll stop there because I’m fully aware there’s the possibility of this blog post seeming self-serving or pretentious or not quite getting at what I want it to get at…but it’s the best I’ve got right now.

I should note that Ann has been too busy to read Des’s review, so I’ll be interested in her reaction when she does.

4 comments on “The Weird: The Generosity of a Story-by-Story Review”