It’s been a banner year for VanderMeer projects that look beautiful and read beautiful, so we thought we’d put together a little Totally Self-Serving Yet Glorious Gift Guide as a reminder for those of you searching around for something cool to give your friends, loved ones, or even people you hate this holiday season. Best of all, these are sumptuous gifts, but also relatively inexpensive.

(Abrams Image, Jeff with S.J. Chambers) – A sumptuous hardcover with raised lettering on the boards-printed cover that evokes Jules Verne, and containing a lively mix of over 200 full-color images and text on everything from Steampunk fashion to literature, making, and more. Featured on the CBS Morning Show in November and profiled in the LA Times, this awesome coffee table book is perfect eye candy but also provides an essential overview of this retro-futuristic movement. Featuring Forevertron Park, the Steampunk Treehouse, the Island of Machines in France, a Steampunk wedding or two, Weta Workshop rayguns, and a Jake von Slatt project. It also includes short essays from Catherynne M. Valente and Jess Nevins, and interviews with Sean Orlando, Scott Westerfeld, and HUMANWINE, among others. The Bible recently made best-of holiday gift lists from MTV and the SyFy Channel and has been spotlighted in the New York Times, Wired.com, and the Wall Street Journal.

ODD? (Cheeky Frawg, Ann & Jeff) – A kind of e-book companion to The Weird, ODD? this new anthology series is devoted to eclectic fiction, usually with a fantastical, horrific, magic realist, or surrealist approach. As the subtitle of “Is it odd or are you too normal?” suggests, “odd” is a truly subjective evaluation. One person’s “what the heck?!” is another person’s “eh—saw that yesterday.” Each volume will contain reprints (some of them not available otherwise except in expensive limited editions), previously unpublished stories, and new translations of classic and hard-to-find stories. Authors in volume 1 include Caitlin R. Kiernan, Jeffrey Ford, Hiromi Goto, Nalo Hopkinson, translations by Gio Clairval, Brian Evenson, and Larry Nolen, Swedish sensation Karin Tidbeck, and many more. Oh, it’s odd all right. You can buy it from the usual suspects, or click here for subscription and Oddkin information, as well as the full table of contents.

THE KOSHER GUIDE TO IMAGINARY ANIMALS

(Tachyon/Cheeky Frawg) – A perfect little gift book also available as an ebook, from 2010. You know you want it. It’s silly, it’s insane, it’s beautiful. More info on the website, including reviews. 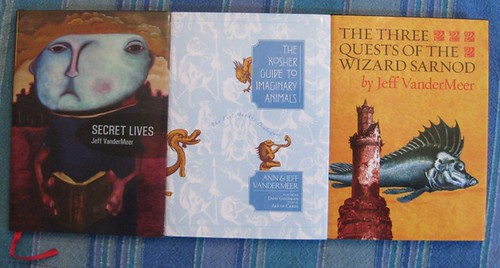 And, from the author, limited edition, numbered and signed copies of both Secret Lives, a series of humorous short fictions by Jeff, and The Three Quests of the Wizard Sarnod, a lovely little hardcover designed by the amazing John Coulthart, containing the extended version of Jeff’s Jack Vance Dying Earth story. Inquire at vanderworld at hotmail.com for details and indicate what country is being shipped to. These copies come fully personalized with an illustration from Jeff, as so desired, and can be gift wrapped and sent directly as presents. (And a limited number of copies of Jeff’s novel Finch complete with the Murder by Death Finch CD are available, too.)

Next week: We unveil our new Cheeky Frawg site, with a full range of selections for the aficionado of the electronic form, free electronic holiday wrapping, and more…In the meantime, you can peruse our page with buying links here.