(Myster Odd based on a character created by Jeremy Zerfoss. Music by Danny Fontaine; lyrics by Jeff VanderMeer and Danny Fontaine.)

Announcing the release of the unique new fiction anthology ODD?, which asks the question “Is it odd, or are you too normal?” A mix of originals, new translations, and reprints (many of them hard-to-find) that qualify as “strange fiction”, some of it surreal, some horrific, some fantastical, and all of it…odd. (Unless it’s just because you’re too normal.)

—Brought to you by Ann & Jeff VanderMeer, the team behind such anthos as The New Weird, Steampunk Reloaded, Last Drink Bird Head, The Thackery T. Lambshead Cabinet of Curiosities, The Weird: A Compendium of Strange and Dark Stories, and the Best American Fantasy series.

WHERE CAN I BUY IT?

In addition to Amazon in Germany, France, and the UK, you can buy ODD? at:
—Amazon.com
—B&N
—Weightless Books
—Wizard’s Tower 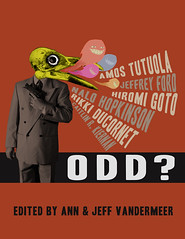 You can subscribe now and be assured of receiving each volume at a reduced price. It’s a chance to support a cool new project that brings you fiction from writers from around the world.

—Shipping and handling within the US is included free for print volumes; outside of the US please add $25

Or, become one of our valued “Oddkins” for $65 and receive the e-book and trade paperback versions *plus* all kinds of…odd and unique extras…with the delivery of your trade paperbacks. (US only offer: Extend it now to an additional year for only $110 total.)

—Oddkins living outside of the US alas must add $30 to cover shipping.

A “Super Oddkin” at $275 receives every volume until we die or the series is discontinued (this $275 value is guaranteed with books of equal value written or edited by us should ODD? end early) For those outside of the US, a Super Oddkin status is $400.

—You may designate different delivery email/addresses for the print versus ebook versions if ordering both; i.e., give one version as a gift.

Send a check made out to “Jeff VanderMeer” to POB 4248, Tallahassee, FL 32315, or paypal to vanderworld@hotmail.com – you must confirm via email before October 22 that you plan to take advantage of this offer.

WHAT’S WITH THE COOL VIDEO?!

The video featured above is a unique short film by Greg Bossert celebrating ODD? Bossert, based just over the Golden Gate Bridge from San Francisco. has done research and design for feature films—including the Neil Gaiman/Roger Avary adaptation of Beowulf and Tim Burton’s Alice in Wonderland—and worked on creating visuals and sounds for independent films, including the One Minute Weird Tales video series. His stories have appeared in Asimov’s Science Fiction and ESLI Magazine. Find out more at Sudden Sound and his website.

WHAT THE HECK IS A CHEEKY FRAWG?

Cheeky Frawg specializes in quality, self-aware e-books. We hand-craft every e-book on a letterpress using only the best, most perfectly formed 00000s and 111111s. Our e-binding is hand-rolled by former Cuban cigar makers, our interiors are lovingly formatted by Neil Clarke, and our covers, unique back covers, and wallpapers are designed by the Las Vegas Madman, artist Jeremy Zerfoss. Cheeky Frawg is a joint production of Ann and jeff VanderMeer. Join us on facebook!

Michael Cisco – “Modern Cities Exist Only to Be Destroyed”

Caitlin R. Kiernan – “A Child’s Guide to the Hollow Hills”