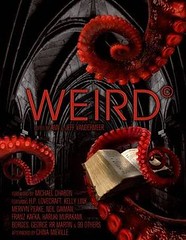 THE WEIRD: A Compendium of Dark & Strange Stories
Edited by Ann and Jeff VanderMeer

Over one hundred years of weird fiction collected in a single volume of 750,000 words. Over 20 nationalities are represented and seven new translations were commissioned for the book, most notably definitive translations of Julio Cortazar’s “Axolotl” and Michel Bernanos’ short novel “The Other Side of the Mountain” (the first translations of these classics in many decades). Other highlights include the short novels / long novellas “The Beak Doctor” by Eric Basso, “Tainaron” by Leena Krohn, and “The Brotherhood of Mutilation” by Brian Evenson. This is among the largest collections of weird fiction ever housed between the covers of one book.

Strands of The Weird represented include classic and mainstream weird tales, weird SF, weird ritual, international weird, and offshoots of the weird influenced by Surrealism, Symbolism, the Gothic, and the Decadent movement. (A discussion of weird modes of fiction can be found in the introduction.)

A compendium is neither as complete as an encyclopedia nor as baggy as a treasury. Although the backbone of the book reflects the immense influence of both Kafka and Lovecraft, we have ventured out from that basic focus to provide different traditions of weird fiction and outliers that are perhaps open to debate. The anthology is meant to be both an interrogation of weird fiction and a conversation with it. We hope that readers will be delighted by the classics included and by the unexpected discoveries found within its pages.

Also, in support of both the anthology and weird fiction, we will be launching http://www.weirdfictionreview.com in October. 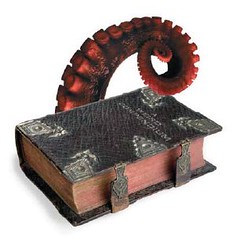 Story order is chronological except for a couple of exceptions transposed for thematic reasons. Stories translated into English are largely positioned by date of first publication in their original language. Authors are North American or from the United Kingdom unless otherwise indicated.

Lord Dunsany, “How Nuth Would Have Practiced his Art,” 1912

Gustav Meyrink, “The Man in the Bottle,” 1912 (translation, Austria)

Bruno Schulz, “Sanatorium at the Sign of the Hourglass,” 1937 (translation, Poland)

Michel Bernanos, “The Other Side of the Mountain,” 1967 (new translation by Gio Clairval, France)

William Browning Spenser, “The Ocean and All Its Devices,” 1994

Brian Evenson, “The Brotherhood of Mutilation,” 2003

62 comments on “Table of Contents: The Weird, edited by Ann and Jeff VanderMeer”