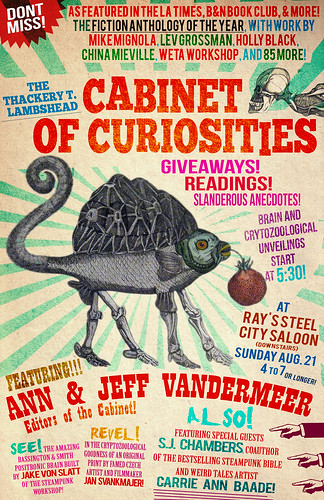 In honor of the Tallahassee Lambshead Cabinet Extravaganza occurring this Sunday at Ray’s Steel City Saloon (info here), I’ll be posting some special new material connected to the anthology (order it here!).

First up is contributor S.J. Chambers’ rumination on Poe-pathy, associated to some degree with her contribution to the Cabinet antho, Dr. Lambshead’s Dark Room. The account of meeting Dr. Lambshead concerns hypnotic techniques, including the Valdemar Method, which enabled the doctor “to extract from even the most cavernous subconscious those diseases that afflicted the soul, as demonstrated in the mesmeric stories of Edgar Allan Poe.”

Tomorrow: An expanded treatise on the famed “Ear-Eye”!

Have you experienced these following symptoms: soaring soul, existential exigency, speaking in cryptically symbolic metaphor, vertigo caused by sublimity, vision heightened by chiaroscuro, dead-dwelling or head-swelling? Do you suffer from daydreaming reflex with reveries that include blackbirds, scents of an unseen censor or aberrant alliterative applications? If you have answered yes to more than one of these, you may be suffering from Poepathy. A terrible disease of the soul, characterized by the affectation of the imagination and its degenerate interaction with the secular world, Poepathy is derived from continual contact of the reader’s imagination with that of 19th- century American author, Edgar Allan Poe, and the dependency upon Poe’s work for constant creative stimuli. 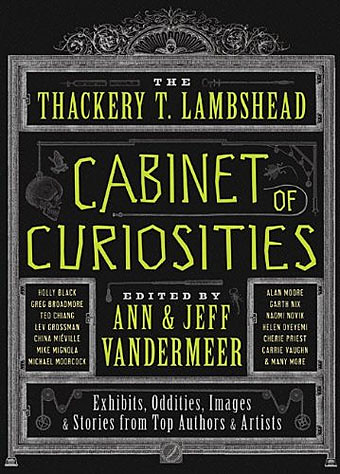 Not everyone who reads Poe’s stories contracts Poepathy; only a select few possess the proper imagination type that makes certain readers susceptible. Poe terms this predisposition as the Pure Imagination. In his Marginalia, Poe provides for us the definition of this susceptibility: “The pure imagination chooses, from either Beauty or Deformity, only the most combinable things hitherto uncombined . . . the admixture of the two elements results in a something that has nothing of the qualities of either…Thus, the range of Imagination is unlimited.”

Nothing better describes Poe’s aesthetic than the alchemy of beauty and deformity, and it is underneath the suspense and terror encountered in Poe’s work where a diligent aesthetic festers. Not only are there elements of morality, beauty, and psychosis, but pieces of biography as well.

It is well known that Poe married his 13-year-old cousin, Virginia, at the age of 27, only to spend the decade of their marriage watching her cough herself to death from tuberculosis. Virginia was not the only woman Poe had to watch die. From birth, he watched those he most adored waste from the same illness: his mother, his foster-mother and his brother. Amidst all this misery, Poe sought refuge in romanticism and learned how to climb out of the dismal verities of life with a ladder made out of words. Torn between logic and dreams, Poe devised a world where he could both analyze life’s horrors and transform them into poetry.

Every story and every poem has been meticulously worded, constructed for an ultimate effect; yet after all this premeditation, these statements of images and facts, his work still resonates like a painting. The image provides only signifiers to the story, the rest of the telling is left up to the imagination. To put it another way, his effects are not an end to a means, but the end to a precipice from which one can jump into eternal reverie. Poe enthusiasts dwell on Poe because of his potential. This potential hooks the susceptible pure Imagination and sends the enthusiast into the first fevers of Poe’s plague.

The first outbreak occurred, not in the United States as one would presume, but in France in 1847 when poet Charles Baudelaire stumbled upon a translation of “The Black Cat.” At this time in Baudelaire’s life, he had been developing an aesthetic that would be best expressed through his poetic work, Les Fleurs de Mal, in 1852. But in 1847, Baudelaire feared his vision would be misunderstood and lacked confidence. Baudelaire had developed a concept of ambiguous beauty where the act of creating with all the senses resulted in an ambient tale that presents an alternative to nature and reality. What Baudelaire thought was his unique idea was found expressed perfectly by a man across the ocean several years earlier. Once he found his trans-Atlantic soulmate, he became obsessed. He studied English for four years solely to read and translate Poe’s work. When he heard of an American in Paris, he would track him down for questioning and impressions of Poe. He even prayed to Poe, as documented in his diary My Heart Laid Bare, and pooled most of his creative energy away from his own work and into writing, promoting and translating of Poe. With these endeavors circulating in the French intellectual mind, Poepathy became epidemic.

The disease was spread to poet Mallarmé, who had been Baudelaire’s protégé. Mallarmé, in turn, passed it to all of his disciples of the Symbolist movement, and so on through the decades until the Poe fever broke in Surrealism. To the adherents of each movement, Edgar Allan Poe was a different man. The ambiguities of Poe’s work and life which allowed Baudelaire to shape him into a poetic God whose example all artists should follow, would also lend itself to all Poepathists to be molded in their own image. With his work translated, French artists were allowed to see Poe for how they wanted to see him, rather than how Baudelaire presented him, as Poe scholar Raymond Foye summarizes: “ From Mallarmé on, interpretations of Poe diverge radically. The Symbolists…adopt the Poe of ordered, pragmatic, rational thought—the master of formal investigations and the fine art of reasoning. On the other hand, the Decadents…and the pre-Surrealists embrace the adventuresome Poe, the high priest of horror, mystery, imagination, dreams, drugs, and the disorders of the sensate mind. One particular quality in Poe’s writing took on a cardinal importance: what the Surrealists’ Andre Breton called convulsive beauty,— violent, shattering, involuntary, and inclusive of the erotic.”

This convulsive beauty is best epitomized in Jean Epstein’s early surrealist film The Fall of the House of Usher. Filmed in 1923, Usher, like most Poe films, is a combination of several Poe stories, such as “The Oval Portrait,” and his mesmerism tales.

Roderick Usher, like any good Poepathist or surrealist, is diseased by art. He ignores his wife, Madeline, for the company of her portrait. Whenever she comes into his view, she becomes a drone and poses for him, all the while agonizing over her neglect and fatigue. When his painting is complete, she collapses and is believed dead. Usher reveals that he has hypnotized her and urges those around him not to bury her. They ignore him, thinking it is just more of his lunacy, and bury Madeline alive. True to Poe’s story, Roderick writhes under guilt and believes he can hear her stirring within her coffin. With the advent of a fierce storm, she escapes. She returns to the house to find Usher, The wind blows through the house upon her return, and the flames catch on the curtains. Unlike the story, Madeline has not come to avenge herself, but to return to Usher, and they escape as their house collapses into ruins.

With Poepathy now in the cinema, an artistic media most publicly available, the disease transferred from avant-garde esotericism and onto the pop-culture screen of American cinema via the famous Roger Corman/Vincent Price films. Both admirers of Poe, they set out to bring the King of the Macabre to the silver screen but were faced with lack of material. Poe’s stories were not only short, but as stated before, ambiguous and provided only an idea that could fuel a full-feature film and not enough content to fill it. So stories like “The Pit and the Pendulum,” “The Masque of the Red Death,” “The Raven,” and again, “The Fall of the House of Usher” were subjugated to revamping to the extent that they are sometimes unrecognizable. Regardless, the films reestablished Poe in the American horror consciousness, as well as international, and a total of 185 films and TV shows are listed on Internet Movie Database as having been made from Poe’s work.

Poe’s life has also been open to interpretation in the recent years within literature. Roughly about 25 novels have been published about Poe as narrator or as a character in a mystery. The latter most recently seen in Matthew Pearl’s The Poe Shadow and Louis Bayard’s Pale Blue Eyes. With popular fiction and popular cinema, Poe is easily found in horror pop culture. Whether in the music of Iron Maiden and Rob Zombie, or in popular comic series like Roman Dirge’s “Lenore: The World’s Cutest Dead Girl” or Richard Corben’s Haunt of Horror graphic novel, Poepathy is now more easily transmittable to the susceptible dreamer than ever. Another epidemic will inevitable erupt with Poe’s bicentennial, when Sylvester Stallone releases his biopic Poe this winter, and the possibility of Johnny Depp producing Grant Boucher’s bio-script Forevermore.

Even without a cultural revival, Poepathy afflicts millions of readers around the world. A maddening pestilence with no cure and no treatments, one simply outgrows it or lives with it until death, nursing one’s parasitic imagination the best one can…whether through adulation like Baudelaire, reinvention like Corman, or just daydreaming, those afflicted with Poepathy become like Roderick Usher, Prince Prosper or any of the nameless maniacal narrators in Poe’s work: obsessed, neurotic and fervently passionate about beauty and deformity. This illness strengthens the imagination rather than weakens, a disease that enhances the world with the exaggerated blush of a consumptive and brings out the poetic verisimilitude within.