Many at the Shared Worlds teen SF/F writing camp here at Wofford College in Spartanburg, SC, know about Totoro but not as many know about the Moomins. So I have created this handy and totally arbitrary guide that compares and contrasts them. – JV

Totoro is a giant creature featured in the movie My Neighbor Totoro. It can fly but sometimes likes to just stand by a bus stop so it can use unusual forms of public transit.

…or sometimes it just is a person in a sweaty mascot outfit waiting for a real bus. 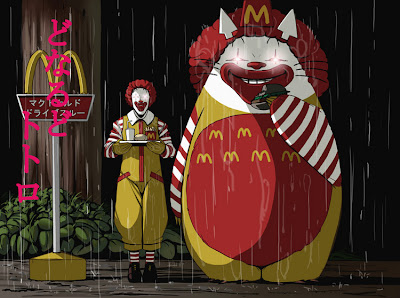 Meanwhile, the Moomins are a family of large hippo-like trolls created by author Tove Jansson and written about in comics and books. 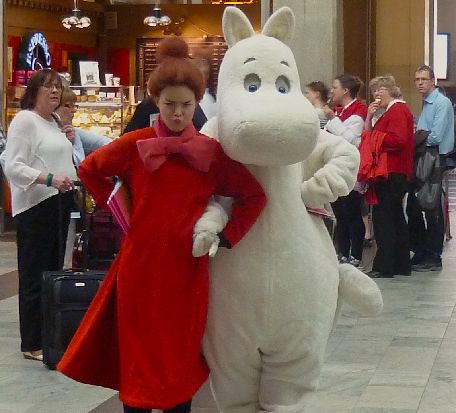 Totoro seems to be happy enough to be around people, but that stare indicates Totoro would also be fine without them. Totoro seems to have friends, but not a whole lot of them.

Moomins have their family and friends and a lot of other people and animals that interact with them. If you sat down with a Moomin you might get a slice of berry pie. If you sat down with Totoro, he might give you a scary but exciting ride through the night sky….but you wouldn’t get any pie, just some stray acorns from between his toes. Totoro doesn’t appear to know how to cook…or care at all about cooking.

Moomin are deceptively cute…which means they tend to be very wise and if you are hoodwinked by their cute factor you might miss the wisdom. (Well, okay, sometimes Moominpappa isn’t so wise.) Honestly, I wouldn’t play cards with Moominmamma, either.

Sometimes, you get the sense that Totoro might be hiding a little bit of a temper… 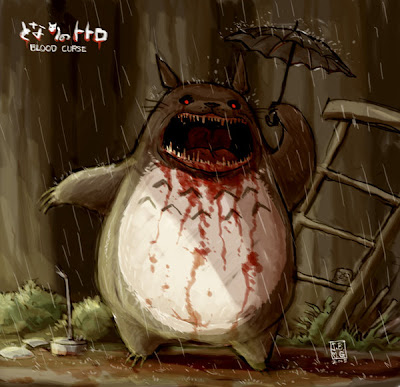 Angry Moomins are rare, but because of that fact angering a Moomin doesn’t seem like a good idea. If you anger a Moomin, you would probably get punished within the confines of the law, and have a fair trial, because that’s what the Moomins would approve of. But that Moomin would make darn sure he or she had an iron-bound case against you and your ass would be in jail for a long time for whatever offense you had committed. 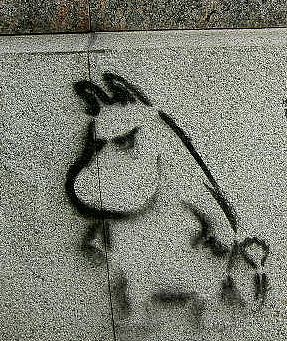 Many have wondered what would happen if Totoro and Moomins came into conflict. (Well, okay, just me.) These fingers found randomly on the internet indicate Moomins might at first be outnumbered.

This might lead the Moomins, especially given Totoro’s superiority in the air, to temporarily retreat via boat to a remote island with a lighthouse.

But this photo reveals that the Moomins eventually would counter with an army of cardboard robots built out of hundreds of discarded whisky boxes. 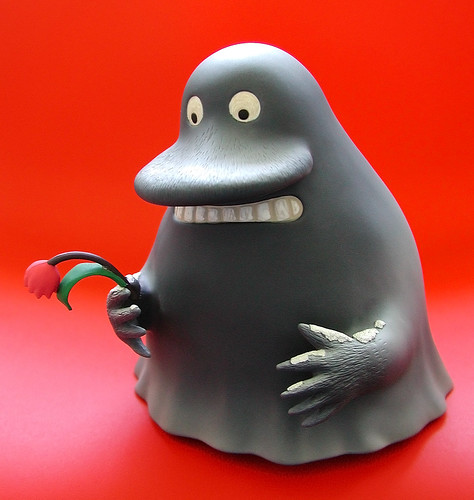 …before inviting Totoro over for tea so that the Moomins could talk some sense into Totoro.

…or attempt to cook him (in a respectful way)…. …which would only infuriate Totoro and his allies and lead to more bad blood.

…like this propaganda film created by Totoro wishing ill-will toward Moomins, deliberately spelling their name wrong, too.

Regardless of how this conflict made up in my head turns out, one thing is for sure: they both look good on a t-shirt!