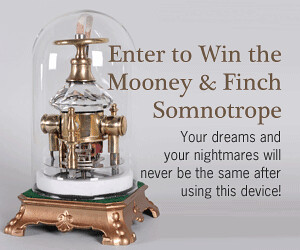 Um, HarperVoyager is doing something incredibly cool in connection with the release of our antho The Thackery T. Lambshead Cabinet of Curiosities—and they’re only able to do it because Jake von Slatt, one of our contributors, is a really nice guy. He’s providing his machine-artifact the Mooney & Finch Somnotrope, created for our book, as the prize in a sweepstakes. That’s right—you could wind up owning a von Slatt original, and all you have to do is buy the book!

What is a Mooney & Finch Somnotrope anyway? Well, we gave a photo of the artifact to Charlie Jane Anders, and she wrote this micro-fiction, included in the book:

Mooney & Finch Somnotrope – These sleep simulators have become rare artifacts—even though they were mass produced in the Mooney & Finch Sheffield facility, each one of them emerged as a unique object due to the pressures of the oneiric centrifuge. However, they were only sold for three months, prior to the first reports of somnambulance addiction and peripatetic insomnia. The idea of experiencing four or five hours of sleep within a mere few minutes held almost unlimited allure for the world’s busiest captains of industry and harried matrons. But few were prepared for the intoxication of the Somnotrope’s soothing buzz, the sheer pleasure of watching its central piston raise and lower, gently at first and then with increasing vigor, until your mind flooded with dream fragments and impression of having sailed to the nether kingdom and back, all in a few minutes. It only took a few unfortunate deaths for the whole line to be recalled. (Charlie Jane Anders)

Now, as is the case with several art pieces repurposed by the writers assigned to them, von Slatt had originally given the machine a working title and description to help him in conceptualizing it: “The other is a Bassington & Smith Electro-Mechanical Analog Brain, about as smart as a common house cat. It was built to manage the systems aboard an ocean liner and was salvaged from its wreckage. A rather predictable and foolish adventure, really. I mean, whose bright idea was it to put a cat in charge of a vessel that displaced 32,000 tonnes?”

Which just means you’d be winning two machines in one artifact! A Mooney & Finch Somnotrope and a Bassington & Smith Electro-Mechanical Analog Brain! 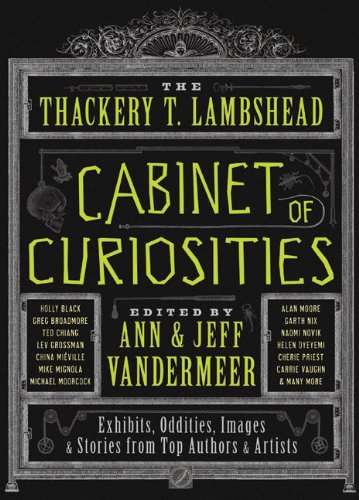