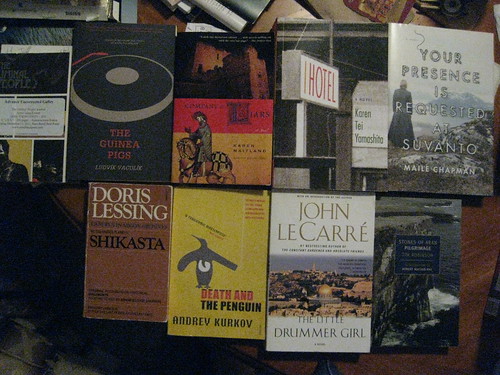 For a variety of reasons—travel, project deadlines—I’m actually in the middle of reading several excellent, excellent books. Most I’m more than half-way through and I can recommend all of them on the basis that if each fell apart right now, on the next page I read, I still wouldn’t regret picking them up.

I am, however, afraid of them slipping through the cracks in terms of remembering to mention them, so I’m posting ordering links and info below right now, while I’m thinking about it. From top left to right, and then bottom left to right…

by Ayize Jama-Everett—I just got this from Small Beer Press, it’s out in December, and it is captivating, interesting style and compelling characters. “When his ex asks for help, Taggert risks the wrath of his enigmatic master to try and save her daughter. But as Taggert realizes the girl has more power than even he can imagine, he has to delve into the very nature of own skills and utilize his heart and soul to survive.”

by Ludvick Vaculik—This is one of those books that starts out humorous and then gets darker with the humor becoming more and more dangerous. Lots of guinea pigs. Quirky, brilliantly written, savage at times. Set in Prague.

by Karen Maitland—High-quality Medieval England novel about a group of odd travelers trying to avoid the plague, with elements of possible fantasy and definite folktales told along the way. No one is who they seem in this book, and it’s written in a style that is modern but does a good job of evoking a Medieval atmosphere. It also seems well-researched without the research slowing the novel down.

by Karen Tei Yamashita—Half-way through this novel I can say with confidence that unless it totally tanks from here on out it will be one of the most amazing reading experiences I’ve had in a long, long time. The only reason I haven’t finished it yet is I don’t want to rush the experience. The technical ability of Yamashita in telling the story through multiple viewpoints and multiple distances from those viewpoints combined with the characterization, the plotting, and the underpinnings of real-life events makes this a very special novel. From the Publishers Weekly starred review: “a stunningly complete vision of San Francisco’s Asian American community in the late 1960s and early ’70s, using the titular inn as a meeting point for ten loosely-connected novellas, each covering a single year. Focusing on the struggle for equality and peace as it involved this particular community, Yamashita’s work also incorporates a broad view of the Asian and Asian American experiences, from Japanese internment camps to the Marcos dictatorship. Yamashita accomplishes a dynamic feat of mimesis by throwing together achingly personal stories of lovers, old men, and orphaned children; able synopses of historical events and social upheaval; and public figures like Lenin and Malcolm X.”

Your Presence Is Requested at Suvanto

by Maile Chapman—I think Chapman is a really, really talented writer, and a third of the way into this atmospheric psychological thriller nothing disproves that notion. Again from PW: “A novelist in search of an appropriate setting for a bleak novel in the 19th-century tradition, where tuberculosis kills thousands and women are routinely deprived their societal voice, would be hard-pressed to find a more fitting venue than the Finnish convalescence ward where Chapman has set her anxious debut. Ex-dancer Julia is a reluctant tenant of the Suvanto Sairaala, attended to by an American nurse named Sunny Taylor with whom she shares an uneasy connection. The two women weather a succession of historical set pieces involving the consequences of imperfectly understood obstetrics, Finland’s changing relationship with Russia, and madness.”

by Doris Lessing—Well, this one should need no introduction. I had the unfortunate experience of reading book four or five a few years back but not knowing it wasn’t the first book, and getting a bit confused. So now I’m going back and starting from the beginning. Truly thought-provoking and world-class stuff.

Death and the Penguin

by Andrey Kurkov—Ukrainian writer who gets in over his head with organized crime keeps a penguin in his apartment. Long story. This is one, though, where I’m in the middle of it and there’s a tad bit of a lull, which I’ll need to motor through to regain interest. Up to this point, I’d been really enjoying it.

by Tim Robinson—If you want to restore your soul, this book is a good place to start. It’s a spiritual experience, and you cannot read it in snippets—you must engage in immersive, hours-long reading. From PW: “An exquisitely detailed portrait of a special landscape, this is a gem-like addition to the travel genre. Robinson, an artist and cartographer, has made prize-winning maps of southwest Ireland and adjacent islands. Describing himself as “self-appointed resident scientific busybody,” he walks the coastline of Arainn, largest of the three Aran Islands, clockwise from the western edge, in an exploration of geology, topography, history, language and folklore. Arainn is limestone, and its natural forms are rectilinear. We see storm beaches–mile after mile of huge boulders stripped from the rim of cliffs and moved inland by wind. Robinson recounts hazardous sports once practiced by the natives–birdcatching and fishing from clifftops; he calls our attention to prehistoric sites and to abandoned forts. He takes a side trip by curragh to the Brannock Islands and meditates on the origins of placenames. Arainn’s north coast was a center for kelp factories producing iodine and fertilizer in the 19th century; Robinson offers a vivid picture of that period as well.”

3 comments on “Reading: Books in Progress”