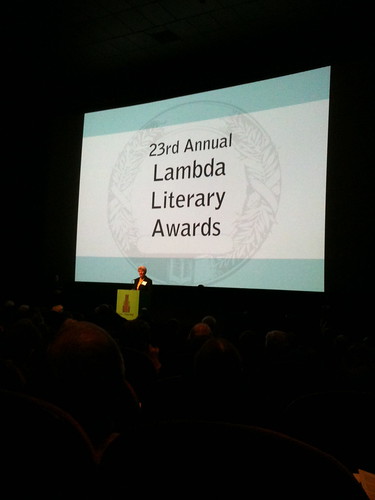 While Ann and I were at the Steampunk Bible B&N event last night, Lawrence Schimel was at the Lambda Award, also held here in NYC. He was kind enough to file the report below. For those unfamiliar with Schimel, he has twice won a Lammy, for his books PoMoSEXUALS: CHALLENGING ASSUMPTIONS ABOUT GENDER AND SEXUALITY (with Carol Queen; Cleis) and FIRST PERSON QUEER (with Richard Labonté; Arsenal Pulp), and has also been a finalist on 14 other occasions.

The “Lammies” have, in the past, tended to drag on. I was quite amused when one winner, David Lennon, quipped in his acceptance speech: “The nice thing about self publishing is that you don’t have to thank a lot of people.”

But thanks to tight organization by Executive Director Tony Valenzuela and lots of coaching of the presenters beforehand, the Awards ceremony, hosted by comedienne Lea DeLaria, moved at a good clip, especially considering they had to present awards in 24 categories, plus the two pioneer awards, a special recognition award to the University of Wisconsin Press, and a slideshow remembering queer writers who’ve passed away in 2010-2011 (where, incidentally, it would’ve been nice to have seen Joanna Russ represented).

But genre work was not overlooked throughout the evening. It was nice to see a queer speculative fiction novel win in an “open” category: Amber Dawn’s SUB ROSA (Arsenal Pulp), which won the Betty Burzon Debut Fiction Award, a special prize which also comes with a $1000 check. Curiously, this title wasn’t also a finalist in the SF category, which was presented by SF grand master Samuel R. Delany.

It was also nice to see comics accepted in different categories, competing with other prose books–and even winning, as is the case of TELENY AND CAMILLE by Jon Macy (Northwest Press), which won for Gay Erotica.

This year was the first in which there were enough titles submitted to create separate Transgender Fiction and Nonfiction categories.

Susan Stinson and Alex Sanchez were awarded the Outstanding Mid-Career Novelists Award. Each received $5000, supported by a gift from Jim Duggins. 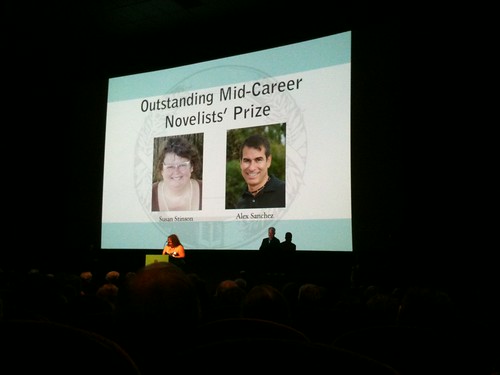 The presenters of the awards (a mix of authors, actresses, and even Miss New York 2010) included: Emma Donoghue, Jack Halberstam, Katherine V. Forrest, Kevin Sessums, and Stefanie Powers, among others.

The winners of the 23rd Annual Lambda Literary Awards:

Lesbian Mystery: FEVER OF THE BONE by Val McDermid (HarperCollins)

Bisexual Fiction: THE LUNATIC, THE LOVER, AND THE POET by Myrlin A. Hermes (HarperPerennial)

Schimel lives in Spain, where he writes in both Spanish and English. His most recent book, ¡VAMOS A VER A PAPÁ! (Ekaré) has been translated by Elisa Amado and is forthcoming this fall from Groundwood, as LET’S GO SEE PAPÁ! He can be found on facebook or or on twitter as @lawrenceschimel