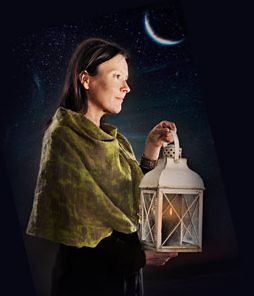 A rock star in the 1980s and 1990s, Sari Peltoniemi has spent the last decade establishing herself as a very respected, award-winning children’s/YA author in Finland, and in general just becoming ever more awesome.

Her latest novel’s title translates as “Cat Taxi,” an homage Hayao Miyazaki’s film My Neighbour Totoro. The book tells about 8-year old Juho, who meets seven strange cats and their sad mistress. Päivi Heikkilä-Halttunen, in a Helsinki newspaper, noted that “As in Peltoniemi’s previous novels…there is a pinch of magic in this book.”

Peltoniemi’s fantasy novel Hirvi (The Elk) won Kuvastaja-prize for best Finnish fantasy novel. Peltoniemi is currently seeking an English-language publisher for The Elk. What’s it about?

What happens to the capricious princess Ursula, when she gets improperly pregnant? She is sent away to the deepest forest, to an old cabin so that people would not see her shame. And the child’s father is sent to the war, to the front line – to die. In her exile Ursula cannot forget her days of splendour in the court, her mean father the King, or her dead lover….The forest is teeming with spirits, and when Ursula gives birth to a little boy the forest names him Elk. Old Willow teaches both mother and son how to use herbs and heal the ill. However, people are afraid of healers like Ursula, and when a plague spreads through the kingdom they blame her. She is taken to the town to be burned as a witch.

What happens afterwards concerns forest spirits, Ursula’s son, and a strange girl named Bat. From a short newspaper review by Suvi Ahola: “Peltoniemi draws her material from folklore and myths. The novel’s milieu, forest, is alive with elves, the dead give advice to the living, shamans heal and visit the Netherworld. The book’s themes are modern, however. The princess becomes socially outcast because of an illegitimate child. Her relationships to her own father and her child are complex….In spite of the fantasy, the story of Elk is down-to-earth rather than fancifully adventurous. Peltoniemi writes lyrically, with restraint and without courting anybody’s favour.”

The short interview below is followed by an excerpt from “The Elk”….

How would you describe the state of Finnish SF/Fantasy right now? Any new movements, recurring themes, or particular authors of note?

Fantasy has been more popular than science fiction for a long time among Finnish writers. Many writers, including myself, are keen on Finnish folklore, Kalevala, etc., and they also are very aware of Finnish literary tradition. That is why Finnish fantasy is often very unique, I’d like to think.

New Weird (or something like that) is slowly getting stronger. In Finland it means especially that many new writers are used to crossing borders between genres, although realism is still a holy form in our litterature. I think [writer] Pasi Ilmari Jääskeläinen should be known all over the world and universe.

How does your work fit into Finnish SF/F, and what influences do you have from outside of Finland?

I write usually low fantasy and it is very often located in Finland or places like Finland. Anyhow I’d like to think that I write about universal matters. I’ve got my influences from English Fantasy as well as from Finnish hard-core realists or Nordic ghost stories. So I think I am a quite typical Finnish SF writer.

What issue or issues are you grappling with right now as a writer, either about craft or being a writer, or anything else?

I have thought for a long time that maybe I should be a little more opportunistic as a writer. If I just wrote high fantasy for teenagers in more entertaining way, I would probably be more famous [but[ It would be terribly boring and it is not what I want to do, but should I still do it? So I have spent time thinking what kind of writer am I and how to really earn a living through this.

Beginning of “The Elk,” translated by David Hackston, posted below, all rights reserved. Published in Finnish as “Hirvi.” Read more of “The Elk” in English here.

I am the Bat and I have the Raven’s quill. It is the most important thing I have because it gives me a meaning and a duty. I can write.

I feel rather sad when I think of it but not for very long and not very often because we scribes respect that which is here right now. For us, the most important moment of all is when our quill scratches across the paper and leaves its mark. We believe that the best of it is that we can tell what we have to tell, that we can begin our story by saying: here I sit with all my pencils and this is why I am important, even though I may claim otherwise. Because without me this story would not be a story at all, just talk that would be forgotten and distant memories. Without me the main characters would not be main characters and the heroes would not be heroes; they would just exist and would then be forgotten. My writing is a gift to them. I will not say that it is a debt which I am paying them, even though they have given me such a great deal. That is something I can never repay or reimburse, I do not need to, as my birth itself was payment enough.

I will tell this story as accurately and as honestly as I can, although my quill is of the kind that does not always obey me. It wants to write in a way that will seduce the reader. I do not know why the Raven cast this magic upon it and I will try to fight against it. I am not a poet, I am merely a scribe. I do not even know any fine expressions and I do not know how to paint sharp images with words like real poets do. Everyone – Ursula, Hirvi the Elk, Varpunen, the old King and even Paju – will laugh and jeer at me for saying this. They will say that I am just trying to hide my passion but I still deny this. That in no way means that I am making light of my work.

Then there is the Adder, who is almost always with me. Even though he does not give out advice or ask favours of me I still notice that I try to please him with my words. I will fight against this too, because this is not the Adder’s story, even though he and his people are present in everything that happens.

First I shall write about a woman who was born in a palace, a Princess, because without her I would not be sitting here with the Adder writing away, I would not be the Bat and neither would I be important…