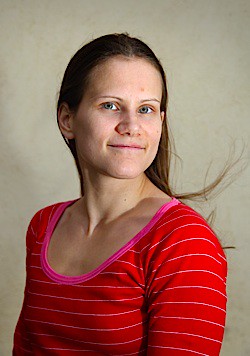 Saara Henriksson, born 1981, is a Finnish writer whose debut novel Moby Doll was published in spring of 2011. She has a background as a journalist and has been active in Finnish SF/F-fandom for several years. She lives in the city of Tampere with her husband and daughter. We were fortunate enough to meet her in Tampere in April, and we enjoyed talking to her.

When she showed me the cover of Moby Doll, my Spidey senses started twitching—which is to say as soon as I saw it I wanted to publish it. I immediately “got” the central concept from the cover: a novel that in at least a small way riffs off of Moby Dick but features a female main character, probably contemporary and probably verging on magic realism. And, my further thought: what an easy novel to pitch to a US/UK publisher. Some concepts are so simple and yet so interesting that they immediately capture your curiosity.

Although the novel’s just out, it’s already receiving great reviews. For example, Antti Majander writing in a major Helsinki newspaper: “Saara Henriksson’s writing is earthly and concrete. She isn’t afraid to plunge into the depths of the whale’s consciousness and stomach. Strangely enough, it’s not goofy, but oddly wonderful…Henriksson weaves togetter fascinating knowledge and mythology of the musical giants of the seas.”

The synopsis? I’ll let Henrikkson tell you that, as part of a short interview I conducted with her via email after our return from Finland. (Here’s a short video showing the book’s very nice design.)

What is Moby Doll about?

Moby Doll is about a whale and a young woman, and a man who is looking for her. The main character, Jenny, wants to find a song that’s been lost since she was a child. She thinks she can remember it from the whale’s song and travels to north of Norway to look for it. Jokke is an ex-boyfriend who follows her to the Arctic Sea. Hope is their friend, a marine biologist and a fisherman. Moby Doll is about obsession and reaching for the impossible, but also about music and the power of communication. One of the characters is the white whale, an all-seeing, all-hearing ancient being, “he who swims alone.”

How would you describe the state of Finnish literature right now? Any new movements, recurring themes, or particular authors of note?

How does your work fit into Finnish SF/F, and what influences do you have from outside of Finland?

I like to place my work in continuum with scandinavian speculative fiction, ranging from Risto Isomäki to Peter Hoeg. As my fiction only has some SF-elements, I tend to think it as belonging somewhere alongside the “mainstream” fiction, almost mainstream but not quite.

What issue or issues are you grappling with right now as a writer, either about craft or being a writer, or anything else?

At the moment finding a commercial publisher, for the industry is changing rapidly and a writer has to once again re-evaluate where to send her work. Traditional publishers have undergone huge changes with job-losses and the biggest publishing house (WSOY) has just been sold to Swedish Bonniers.