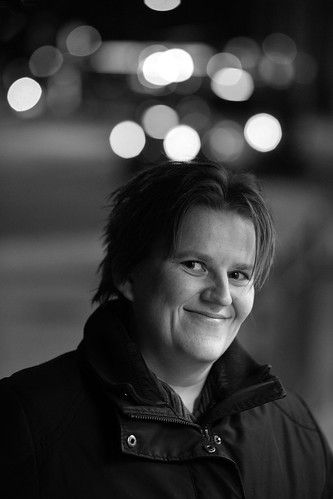 A writer and editor also active in the Finnish SF/Fantasy community, Anne Leinonen has coauthored several books for young people with Eija Lappalainen. Leinonen’s short fiction has won multiple awards. The story “The Othering” won the Atorox Prize, the oldest SF/F prize in Finland, and can be read in English in Usva International 2007 (starting on page 25).

In 2006 Leinonen published a story collection, White Threads: Stories From Other Realities. Vesa Sisättö, the critic of the largest Finnish newspaper, Helsingin Sanomat, described the collection as dealing with the theme of “crossing of the borders of different worlds. Often the main character is escaping or hoping to escape from a narrow minded society or troublesome situation. Limits also contain the borders between one’s own body and the rest of the world or life and death.” Leinonen also has served as the editor-in-chief of the online magazine Usva, which publishes Finnish speculative fiction, and her latest collaboration with Lappalainen, Routasisarukset, has just been published in Finland. Routasisarukset is a Finnish dystopian novel in a vein similar to the works of Ursula K. Le Guin.

My wife and I met Leinonen at the Writer’s House at the University of Jyväskylä in April, and had a chance to talk with her about Finnish SF/Fantasy, her own work, and Finnish fandom. The email interview below followed up on that conversation… 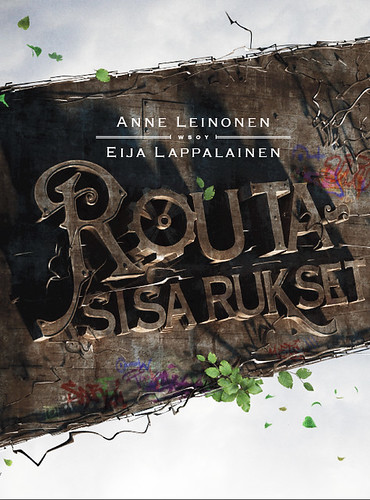 What is the state of Finnish SF/F today, in your opinion?

Finnish science fiction and fantasy is living its golden age. In this century the numbers of the writers has significantly risen, as well as the general respect towards the genre. Even the mainstream writers use fluently the motives and themes of speculative fiction. The borders between the genres have blurred, bringing new methods, paths, and forms of expression to our literature. After a long period of realism—that has concentrated/focused mainly in the issues such as the events of the WWII or everyday life—the scale of expression has expanded. Fantastic and everyday life intertwine, reality gets twisted describing the vastly changing experiences of individuals.

Are there areas of special emphasis in Finnish SF/F in terms of what is published?

In Finland all areas of fantastic are well covered, but the amount of ”hard SF” has remained small in literature. Copying Anglo-American ideas or styles has changed; the use of local and national elements has become natural part of storytelling. Especially nature is used as a strong element, sometimes taking the role of the main character. The Runeberg Prize for fiction went this year to a collection of short stories by Tiina Raevaara, [in which] she wrote about alternative realities. I would compare Tiina Raevaara’s work to Leena Krohn’s and recommend her warmly.

How would you describe your own approach to fiction

I often use lightly speculative fiction as an ingredient in my works. I like to use Finnish folklore, always striving towards my own interpretation of it. Especially I am interested of the sociological analyses: conflicts between the individual and the society. In my works the characters often end up in confronting difficult choices. What I do like to do is to blur the genre divisions.

Style and substance walk hand in hand in my works; I aim for careful and detailed description, as well as combining the macro- and micro-level events of the story. I have searched out different influences from different sources; for example, from the works of Greg Egan, Simon Ings, Haruki Murakami and Margaret Atwood….

What issues are foremost on your mind at the moment, as a writer?

The field of the publishing in Finland is under a serious changeover. My publishing company—the oldest and previously the most respected one—was just sold to Sweden. Now I have to consider how to choose a possible new publisher; where to get the most professional support for publishing SF and Fantasy and how to find the best qualified editors. On the other hand there are still many possibilities through new small and specialized publishing houses. However, most important is the text: what to write, what worlds one wants to explore. What I want is to dive deeper into the world I am creating, the place that allows speculation to hint—not to explain. I want to trust the readers, their abilities of interpretation.

In closing, can you describe for us your latest book, the collaboration with Eija Lappalainen titled Routasisarukset (The Frost Children)?

The main character of the novel, Utu, was adopted by the Valley people when she was only two years old; she is ”different”. She questions the conventions of the society and has a strange ability to understand the ancient abandoned machines. When her foster father Booris tries to saddle her with the first-born’s responsibility for the family, Utu decides to run away and to find her beloved, and also to unravel the mystery of her own biological origin.

Is this the beginning of a series?

Yes, it’s the first volume of a treatment of individual liberties, constricting power structures, the continuity of life and the possibilities of biotechnology. It starts a dystopian action trilogy; it has adventure and love triangles, twists with “techno-hi-fi”, but it also debates the questions about our origins (genes vs. social relationships/ surroundings); lust for power (why do people who intend to do good end up doing bad things?); and how to keep faith with one’s own values, continuity of life, and humanity in general.

2 comments on “Finnish Fiction: An Interview with Anne Leinonen”