If you wander over to Omnivoracious, the Amazon book blog, you’ll find the first of two posts on Finnish SF/Fantasy, the second to run next week. Part of the first post, based on our recent trip to Finland, talks about the strength and unity of the Finnish SF/Fantasy community. So I thought I’d run an interview with Tero Ykspetäjä here. Tero, who lives in Turku, has been involved in Finnish fandom for quite some time and currently runs the informative blog Partial Recall. Also, please do check out the Omnivoracious feature—it’s great to have such a high-profile place for these kinds of pieces, so please signal boost it. Thanks!

Tero, How did you get involved in Finnish SF/F fandom?

I was a regular visitor at my local library as a teenager, and most of the books I borrowed were either sf/f or mysteries. One day sometime in the latter half of the 1980s I found a Finnish sf zine Aikakone (“The Time Machine”) at the magazine section. It was at the time published by Ursa Astronomical Association, and, in addition to articles about sf and science, as well as short stories, contained reports of fandom activity in Finland. I started reading those.

Near the end of the 80s, a friend who worked in a comic book store I visited regularly in the neighboring city told me he was coming to my local town library to talk about comics, and a friend of his would accompany him to talk about the local sf club. This was Someone I Had Read About (in the aforementioned fanzine) and almost felt I already knew, so naturally I went. The event wasn’t an unqualified success—in addition to the speakers, there was a reporter from the local newspaper present, and me. So the Famous Guy (who lived in the same town) invited us over to his place (So. Many. Books.) and we had a nice evening chatting about sf.

He told me about the local sf club pub meetings that had just recently started. As I was just old enough to be let into pubs, I naturally started going. The first or second time I attended the meeting, there was a delegation of fans from Helsinki visiting. First contact with aliens! I got to talking to this guy who looked more like a rock musician than a typical sf fan in his long, black hair, mirror shades, black leather pants, studded belts, and a Jim Morrison t-shirt. We had a long and interesting conversation about sf, and he told me he edited this really cool fanzine called Tähtivaeltaja (which was quite different from the astrological society’s zine that the library carried). [But] Toni Jerrman was just one of the interesting characters I met at the pub meeting, and I felt I’d found “my tribe”. So I kept going and meeting more people (including a very nice and cute girl who would later become my wife). Next autumn I attended my first Finncon (Finland’s national sf convention) and have attended those ever since as well. 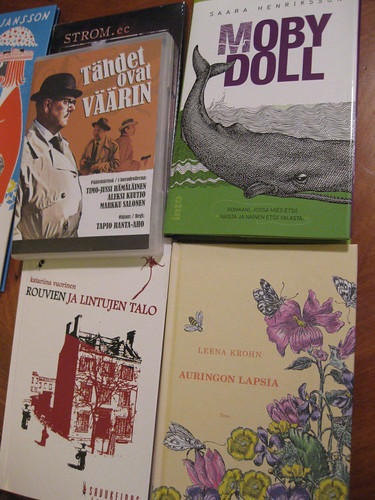 (Some mysterious things brought back from Finland, which will be discussed next week…)

In what ways have you gotten involved over the years?

I’ve done a lot of things, mostly locally in the Turku region. I served on the boards of the local sf associations for almost two decades (and was the founder of the university sf club), edited the club fanzine for a few years, have helped organize a few Finncons, was one of the organizers of the first Åcon (a smaller and more fannish convention held in the Åland island), have written a couple of articles for different fanzines, and even had a small part in organizing a couple of international conventions (Snorfcon 2 in Sweden in 2005 and the Worldcon in Glasgow in 2005).

Nowadays I blog about the Finnish fandom at Partial Recall, am one of the people who keep the local pub meetings going in Turku (and occasionally publish a fanzine there), and serve as the technical administrator of the Finncon association (maintaining their web and e-mail thingies, to use a technical term).

Why do you think Finnish SF/F readers/fans are so well-organized?

Finland has a long tradition of small and bigger non-profit associations, so this isn’t unique to fandom here. But also probably because how fandom got started in Finland—rather late compared to many other countries (fanzines started getting published regularly in the 70s, and conventions started only in the 80s)—and because the persons who were starting it all happened to be quite organized and positive to cooperation by nature. They created a tradition that was easy to follow and that has proven very useful over the years. Although having lots of organizations also has its drawbacks (things sometimes tend to get quite bureaucratic, and it may be difficult to find enough people to man all the needed positions in the organizations), having established organizations has helped a lot getting funding for the Finncons, for example.

How would you describe the SF/F scene in Finland the last few years?

It has remained active. Despite warning calls about graying every now and then, new people are coming in every year. It has also fragmented quite a bit in my opinion: in addition to the traditional fandom with its clubs and zines, new, more independent communities have risen—for example around a web forum, or mainly for younger people. These groups can be somewhat separate from the rest of the fandom and not always all that interested in the “old ways” (instead hanging out in their own groups, doing things they like), but this is just about focusing on the things you want to do; there is still very much cooperation between different groups, and everybody gets along quite well. The national convention is nowadays organized yearly between a few cities, but it is also very much a project of cooperation between many cities (depending on how much help the organizing committee wants and needs, of course). 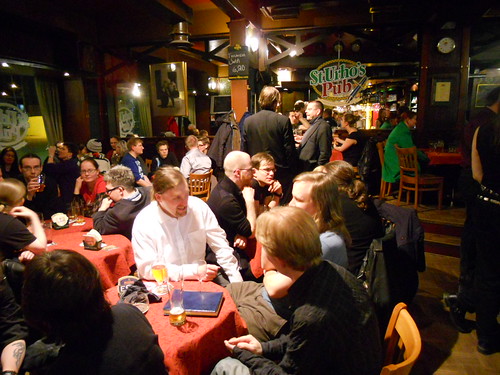 (A photo from our visit to St. Urho’s Pub in Helsinki during one of the regular meetings of the main SF/Fantasy club in the city.)

The sf writers scene has, in my opinion, gotten more lively and more varied lately. Quite a few authors who started publishing in the sf club zine circles have published novels and collections (sf and non-sf), both from small presses and major publishing houses. I think the writers have networked quite efficiently, organizing things like workshops, writing camps, etc. At the moment, I think there’s quite a spectrum of different stories published—from hard sf to the traditional yarns of the new pulp people to the almost-mimetic fiction of the realfantastik movement, and everything in between—not forgetting the domestic rural fantasy that luckily isn’t nearly as dominant any more as it was, or at least felt like, in the late 90s and early 2000.

What has Toni Jerrman and his magazine meant to Finnish SF/F?

A lot. Within fandom, most visibly through the zine Tähtivaeltaja, but also as a fandom active (especially in the early days, including being in the committee of the first-ever Finncon), a critic, an advocate of science fiction and comics, a speaker, and a friend to many in fandom. 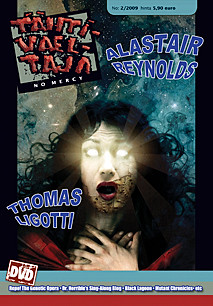 Quoting what I wrote when Tähtivaeltaja hit 100 issues, Tähtivaeltaja has never been content to just tread water, but instead it’s been constantly improving and looking for new things (and telling all about them too). Its main emphasis is and has been science fiction, but horror, comics, rock music, and different subcultures have also been strongly represented. Nowadays the zine doesn’t contain nearly as many accounts of people drinking booze or Toni raving about crappy gigs of bands nobody has ever heard of as it used to, but the zine is no less interesting. Tähtivaeltaja is _the_ place to look for for information about new and interesting writers from Finland and around the world, upcoming trends in science fiction and fantasy, and informed book reviews. 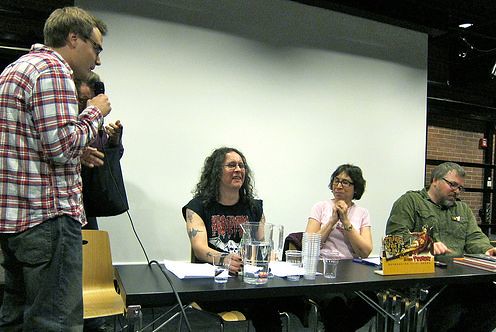 (Translator Juha Tupasela, editor-writer Toni Jerrman, Ann, and me on a panel during Tähtivaeltaja Day, April 16.)

Toni has a very keen critical eye and a vast knowledge of the field, and he doesn’t hesitate to put it to use to tell people about how wonderful sf/f can be. But he’s also such a colorful personality that I have to say without him the Finnish fandom would also be a lot more boring.

What is the importance of SF/F in your life—and why do you stay so active in the community?

Sf/f is my favorite kind of literature, but that isn’t all that important; there are more great books than I ever will be able to read in any genre and style of literature. I’d say the sf fandom has affected me a great lot more. I’ve met many great friends through fandom (and, as mentioned earlier, even my wife). I like giving back to the community, and I guess I’m just the type of person who enjoys organizing things, but getting to spend time with such a wonderful bunch of people is the biggest reward. 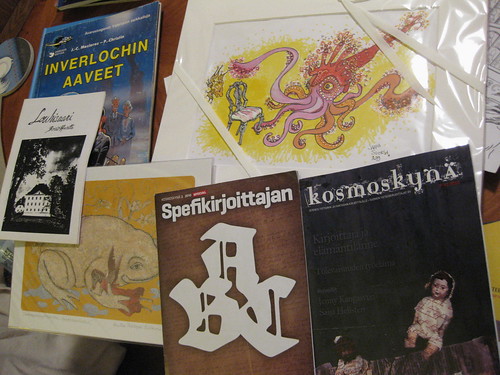 (Finnish SF/F magazines, alongside Finnish art, and a rare chapbook by Finnish writer of the Weird, Boris Hurtta. The squid art is by Jaana Suorsa and the toad with zebra is by Jouto Maassa.)

2 comments on “The Finnish SF/Fantasy Community: An Interview with Tero Ykspetäjä”