The 2010 Shirley Jackson Award finalists have been announced, and my collection The Third Bear

is on the list. The only original story in The Third Bear is “The Quickening,” which you can read online here. It’s one of my favorite stories because it poses a challenge to the reader that will resolve as either an unscratched itch or something more satisfying.

The story is about a girl in 1950s Florida who is given a talking rabbit by a mysterious stranger. Her Aunt Etta, who oversees a rich man’s mansion and his orange groves, sees the talking rabbit as a way to make some money, but the talking rabbit is uncooperative. Indeed, out of earshot of anyone but Aunt Etta and the girl, the rabbit repeatedly says “I’m not a rabbit.” From there, things get rather dark, and the resolution may not satisfy someone who wants a clear taxonomy applied to the rabbit.

My inspiration for the story was a postcard found in a St. Augustine, Florida, giftshop:

But while in Amsterdam this past two weeks I found another postcard that hinted at a totally different story: 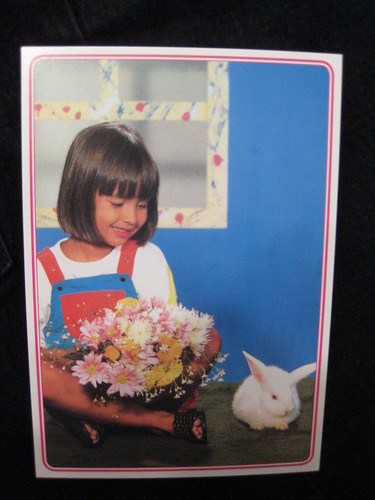 What if this image, not the first, had inspired “The Quickening”? What if the appearance of the rabbit had been a cause for joy or bliss? What if Aunt Etta had not loomed so precipitously over the narrative?

This made me think about variations on “The Quickening” and how there are many different lives to a story that go untold, and many different moments that could have been other moments.

Perhaps in some universe of potential story, Aunt Etta untied the rabbit from the stake and gave up. The rabbit’s stubborness wore down her own, and in that wearing down she became a better person. In that world, the rabbit’s continual refrain of “I am not a rabbit” becomes not a challenge but an invitation, and with the girl who narrates “The Quickening,” she seeks to explore what “I am not a rabbit” meant in a curious, perhaps even a mischievous way.

“Oh, you’re not a rabbit, all right,” Aunt Etta might say. “You look more like a frog, or a weasel. Are you sure you’re not an orangutan?”

And by doing so, her relationship with the girl opens up because they have engaged together in imaginative play.

In another world of potential story, I might also have followed the secretive woman from the Barnum Circus who visits the rabbit—which will not talk while she is there, although something passes between them. What was her tale? Why was there a moment of recognition, half sensed by Aunt Etta? This might even be a whole other story in itself.

Then there are the rabbits the girl didn’t receive from the mysterious man. Did they talk too? Who got those rabbits? Each rabbit accepted an acceptance of a new narrative, a new set of conditions, a whole new world. Some of those rabbits, surely, spilled their guts. Some of those rabbits must have been babblers Why the heck did I pick such a surly rabbit?!

What of the children of the migrant workers, who the narrator finds shy? What were their stories? Did they see the mysterious stranger? Did they receive rabbits? How they perceive the girl, Aunt Etta’s charge? Did they perceive her as she perceived herself—awkward, lumbering, apart? Or was she just someone to avoid because Aunt Etta could hire or fire their parents?

There’s the Mexican foreman with whom Aunt Etta has a physical relationship off and on. What did he see in Aunt Etta? What if anything did Aunt Etta tell him about the rabbit? Was she a totally different person with him?

Perhaps the Mexican foreman knew about the rabbit all along. Perhaps he disliked Aunt Etta because she held power over him. Perhaps he let the stranger give the girl a rabbit to see what would happen. And perhaps not. Maybe to him, it was just another job, one he’d soon be rid of once he’d saved up enough money to open his own business. To him, the rabbit was just another sign of Aunt Etta’s state of mind, she herself someone to occupy his time until he was gone. Who knows?

Then there’s the mysterious stranger himself. What did he think he was doing, giving the rabbit to the girl? Could he have foreseen what would happen? Is this his job? He just goes around giving out rabbits, some of which happen to be talking rabbits? Perhaps this was the first and last time. Maybe he got a job handing out wallabies or meerkats or guinea pigs later. Maybe rabbits got to be just too much of a hassle.

But this rabbit—it does niggle, even to me, makes me itch a little. Was he rabbit, or something else? Was he a zombie rabbit, or an uplifted rabbit or a ghost rabbit or a space rabbit or a robot rabbit or a god-rabbit? When he thought of home, where was home? (Could he have solved the story just by telling everyone who he really was?—“I am the Jesus Rabbit, worship me.”—I don’t think so.)

We’re in the girl’s point of view the whole time, of course, so perhaps there was no stranger. Perhaps she made that up. Perhaps, indeed, there was no talking rabbit, maybe not even a non-talking one. You never know with people telling stories. You never know how much of the truth you’re getting, and how many lies. You never know what world’s story you’re receiving, or how that starting point of inspiration might’ve been different and everything else that came after…changed, irrevocably.

3 comments on “Third Bear Variations: “The Quickening,” Inspiration, and Possibility”