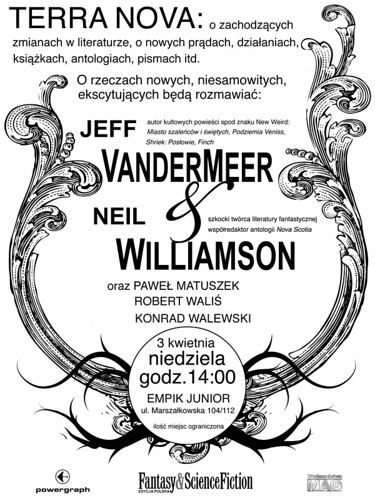 (For more details on the event above, click here. Poster design by Will Hindmarch. PS–I hope I’ll be posting to facebook during my trip, with a sticky post capturing it all here, but can’t be sure…)

Before hitting Finland, Ann and I will be in Amsterdam to visit family, but I’m veering off over the next weekend to go to Warsaw, Poland, at the invite of the Polish F&SF magazine and Konrad Walewski, who has done a bang-up job of scheduling. Neil Williamson, a writer currently nominated for a BSFA award, and a World Fantasy Award finalist as an editor, will be joining me for most of the festivities—including the panel listed above.

I’ve had several books published in Poland now, all with great designs, and I’ve also enjoyed reading the reactions to the books from the very energetic and knowledgeable Polish fans and reviewers (through the miracle of Google translator). Having done so much research for The Weird antho, too, I’m thrilled to be visiting the country that brought us such fine writers as Stefan Grabinski and Bruno Schulz, among others. (I’m re-reading my Dedalus Book of Polish Fantasy this week, too.) I’m very much looking forward to meeting everyone, including my publishers and the awesome Jan Å»eraÅ„ski.

Saturday, April 2—From 2 to 3pm there’s a signing at Warsaw’s f/sf bookstore. There’s also a party in the evening. A late lunch a bit after the signing will be with the winners of a F&SF contest, and I’m bringing City of Saints and Shriek soundtracks for them, among other things.

Sunday, April 3—At 2pm there will be a panel discussion with Neil Williamson, Robert Walis (my translator), Konrad Walewski, Pawel Matuszek, and me about new trends and everything new in world literature (with a special focus on New Weird and steampunk) entitled “Terra Nova,” along with more book signing.

Monday, April 4—I’ll be interviewed on a morning tv show (7am) called “Tea of Coffee?” on TVP 1, Poland’s national tv station. Later that day, I’ll be recording an interview for a radio station. At 2pm, tune in for a live video Internet chat at this internet address. here.