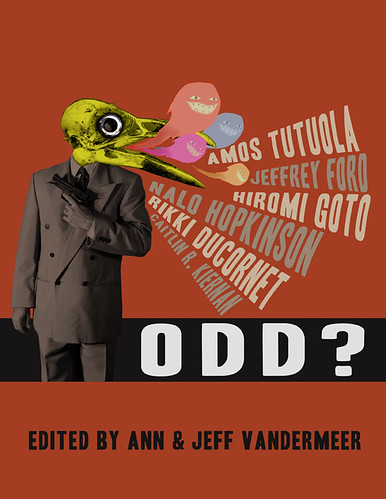 We’ll be announcing the full roster of a new line-up of e-books under our new Cheeky Frawg imprint very soon. Most of them are reprints only, focusing on my own work to start. However, one project that kind of came to us in a flash of inspiration, launches a new e-book anthology series, featuring new and reprinted stories, along with new translations of favorite stories. ODD? will be out in May, and eventually followed by a POD version that will include most of the material in the e-book version.

The plan is to release ODD? twice a year and have it be a showcase for strong, hard-to-define fiction, some of which may be slightly disturbing. Eventually, once it’s established, we want to bring it full-on back into the print world with a version that includes strange comics and art—basically an odd culture zine with high production values—while continuing to do the e-book version.

The cover is by Jeremy Zerfoss, and may change slightly before publication.

Here’s the line-up for volume one…

The anthology that poses the question, “Is this odd…or are you too normal?”

13 comments on “ODD? Volume One Table of Contents”