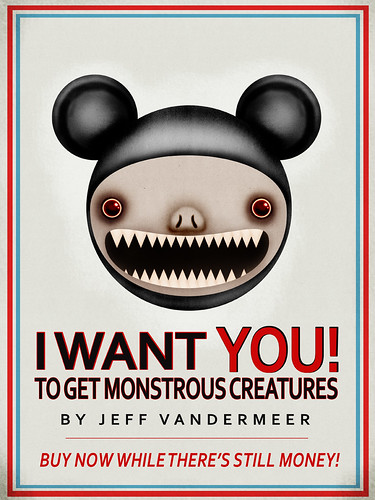 The long and the short of it: Raw Dog/Guide Dog is now offering not just the hardcover and trade paperback of my nonfiction collection Monstrous Creatures (see TOC) but a signed limited edition that includes the following additional section and a different cover. All royalties I receive these editions of Monstrous Creatures will help fund, along with direct donations, the translations component of the anthology Leviathan 5.

Bonus Section for Limited: “Monstrous Jobs” (in which I am forthcoming about odd jobs I have held)

Free PDF download of my prior nonfic collection Why Should I Cut Your Throat?

Cover by Jeremy Zerfoss (higher res on his site):

One story that didn’t make the cut because of space considerations below, along with a video of another story I only ever tell aloud and isn’t work-related…

Back in 1998 or 1999â€“Iâ€™ve wiped the exact dates from my memoryâ€“I, along with two colleagues, was sent on a road trip across the state by my current employer. Our task? To document existing business rules/models at the county level for a state agency.

This road trip took place over 18 weeksâ€“every other week we would fly, or more usually, drive, to another location in Florida, some of them more cosmopolitan than others. Driving was interesting. Once, we got into an accident. A few other times, my colleague the driver would see a desired location, like a Chinese restaurant, and decide, although three lanes over and only 15 feet from the entrance to the place, in heavy traffic, to just barrel over two lanes of screeching, honking traffic to get to said restaurant. I thought we were all going to die.

There was also the care-free episode in Chiliâ€™s when I found vast quantities of what appeared to be tinsel in my grilled chicken and one of my colleagues found what at first appeared to be a shredded condom in his Caesar salad, but was later identified (thank goodness) as something at least a little more sanitary, made of plastic. Then, to return to our plastics theme, on the way to the airport, a plastic bag got caught in one of the wheels and I suddenly saw smoke risingâ€“had no idea it was just a plastic bag burning from the frictionâ€“and thought the $*%&$#&!! car was on fireâ€¦

Throw in a hotel from hell in Sebring, Florida (thousands of mosquitos *inside*; moist, sweating, ectoplasmic walls; corridors on the second floor built with such low ceilings I had to stoop), the car accident we witnessed in St. Petersburg during which the one guy decided to beat the living daylights out of the other guy, and the 8th trip (to where? I canâ€™t even remember at this pointâ€¦) where one colleague lost the crown on one of his teeth and the other got a 103 degree fever and, yes, it was what you might expect: an absolute laugh riot.

But the piece de resistance (and Iâ€™d long since given up putting up any resistanceâ€“if weâ€™d had a 10th meeting out of town, monkeys could have flown out of my colleagueâ€™s butt during the sessions and I wouldnâ€™t have even blinked) occurred on our Fort Myers trip/experience.

The hotel we were staying at had a computer room with a printer so rather than lug our printer down with us, I was going to use the hotel facilities. I went down there with my disk and the glass door to the room was shut and some huge, 450 lb (I kid you not) 6 foot 5 white guy with a shaved head and an earring was using it. All he needed was a bandana, a parrot, and a pegleg to be a pirate. So he comes out and as he passes me in the doorway I see he has shut down the computer and Iâ€™m going to have to rebootâ€“which is not good. Iâ€™ve got a deadline. I donâ€™t have the time.

So I just kind of under my breath, looking at the screen, said, â€œNo!â€
The guy immediately turns around and says to me, â€œAre you cursing me? Are you cursing me?â€ His face is all red and his eyes are wild. I have no idea what heâ€™s talking about, but about the time I say â€œWhat are you talking about?â€ he has begun a little dialogue with himself that goes a little like this:

Which is scarier than his anger, frankly. So I tell him of course I wasnâ€™t cursing himâ€“that I just said â€œnoâ€ to the computer. He says a few more things to me and to himself and stalks off.

I sit down, a little out of sorts, and turn on the computer again and start figuring out how to print on their crappy equipmentâ€¦when he comes back in again!!!!!!! This time the conversation goes something like this:

â€¦and then he totally freaks me out by saying this:
â€œFROGGYâ€“ARE WE GOING TO GO? FROGGYâ€“I WANT YOUR BLOODâ€.

Now Iâ€™m sensing something seriously weirdâ€“I mean, how the hell does he get the frog connection? How does he know I collect and write about frogs? He doesnâ€™t know me from Adam.

So Iâ€™m severely rattled now and Iâ€™m looking around for something to hit him with because heâ€™s balling up his fists. Thereâ€™s nothing but the printer, so I kind of put my hands on it, I guess thinking Iâ€™d rip it off the desk and throw it at him. He, predictably, says again, â€œIâ€™ll see your blood on the floor.â€

Meanwhile, Iâ€™m wondering if printing out the meeting minutes is really worth my life. So I say:

Me: Should we call in security and ask them what they think of this idea?
He: Are you the manager?
Me: No. Iâ€™m not the manager. I just think we should go out into the lobby and ask security what they think of your idea.
He: Do you own the hotel?
Me: NO! I donâ€™t own the hotel. But letâ€™s go out in the lobby and ask them about this. Get it sorted out.
He (to himself): Heâ€™s just making fun of you. Heâ€™s going to get you.
Me: Iâ€™m going to get up now and we can go out in the lobby.
He: Iâ€™m still going to see your blood on the floor.

And then he leaves. One of my colleagues comes down to help out and wonders why Iâ€™ve locked the computer room door. I quickly let her in and lock the door, still trying to print the minutes for the next meeting. I tell her the story and she doesnâ€™t believe me! She thinks Iâ€™m making it up! (Imagine that.) So, then the guy comes back again, but canâ€™t get in because the door is lockedâ€¦so at least Iâ€™m believed nowâ€¦but we see the guy talking to the hotel clerk in the lobby. Then he leaves.
Then the hotel clerk comes in and says that the guy told her that I kicked him out of the computer room and told him I was the manager and I would call security on himâ€¦We explained our side of the storyâ€“â€Heâ€™s crazyâ€¦â€â€“and that was the end of it. We never saw him againâ€¦
Needless to say, we all went out that night and had a few stiff drinksâ€¦

So…you’ve read ALL of this free content. How about a donation for Leviathan 5? Hmmm? It’ll make me dance on video…