This is the fourth in a series of reviews done by myself, Larry Nolen, and Paul Smith. Each of us (along with the occasional guest reviewer) reads and reviews the book selected independently of the others’ opinions. Larry and Paul’s reviews may be found at the respective links above, along with a summary post on Amazon’s book blog. Next up: the work of Eric Basso.

Gerry Alanguilanâ€™s Elmer, first published by Komikero in the Philippines, was finally picked up by SLG in North America last year. The four-book comic now collected as a graphic novel tells the story of a family of chickens and their interactions with human beings in the aftermath of chickens everywhere mysteriously becoming intelligent. Thankfully, Alanguilan doesnâ€™t waste time trying to explain why chickens have become intelligent. Instead, he employs a structure that follows chicken Jake Galloâ€™s quest years later to understand his father, Elmer, and also to understand the horrors and mercies of the past. Elmerâ€™s left behind a diary, and Jake reads through it, Alanguilan using flashback sequences to devastating effect, their power in part due to the contrast with the scenes set in the relative normalcy of the present.

There are many moments of pathos in Elmer, scenes that will stick with me for a long time, but perhaps the one that got to me the most also explains why Elmer is so effective in presenting seriously and with great skill an idea that in summary seems destined for humor. Jakeâ€™s sick mother, from her bed, recounts what those first moments of sentience were like: â€œIt was as if someone turned on a light. Like waking up from a long sleep and you donâ€™t remember who you are, where you wereâ€¦and what time or day it was. I couldnâ€™t really remember anything. Except that I was hungry. As if I was always hungry. I wanted to eat. It was a desire that seemed to completely consume me. Then the screaming beganâ€¦â€

This leads to one of the great page-turns in recent comics history, when she realizes sheâ€™s in a poultry kill line. 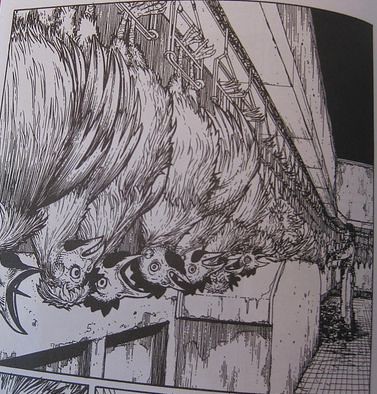 This style used by Alanguilan is so important to Elmer. It is detailed but clean, never cluttered. It allows the text to support a realism in the art that makes the reader move past any doubt about the seriousness of the intent. This style also allows Alanguilan to give his chicken characters personality without reducing them to caricatures. The faces are expressive while still being specifically chicken-like. Some readers will want to read parallels to real-life bigotry and real-life events, and I think this is secondarily Alanguilanâ€™s purpose. But the primary challenge he faced was to tell a story about chickens that become intelligent, and itâ€™s from the foundation of making the reader believe in that story that any other effects are at all possible. In other words, Elmer can become metaphorical only after itâ€™s become real.

Elmer is also solidly about family. All the great art in the world wouldnâ€™t matter if Alanguilan didnâ€™t keep the spotlight firmly on this family of chickens and their bond to human allies. Son Jake is a good kid, the father is admirable if at times distant, the rest all have their quirks, their foibles, the things that make them distinctive. You genuinely care about these people, and you worry terribly about what they go through. A real depth of feeling comes through on the pages, a sense of the author knowing these characters very well. To accomplish this in the short span of a relatively slim graphic novel is nearly miraculous and speaks to the level of the creatorâ€™s skill.

I have to admit that I teared up a few times reading and re-reading Elmer, something that almost never happens to me.

Note my prior post about the limited edition version of Elmer that the creator so kindly sent to me.