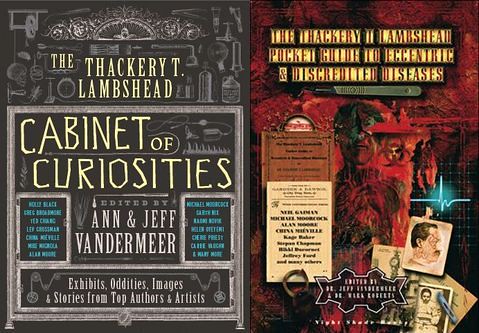 Yesterday io9 revealed the table of contents for The Thackery T. Lambshead Cabinet of Curiosities, our follow-up to The Thackery T. Lambshead Pocket Guide to Eccentric & Discredited Diseases. This new anthology is out from HarperCollins in June. Thanks to our editor there, Diana Gill, as well as Will Hinton, for making it a smooth and fun process. The book is available for preorder. It will be an oversized, 7 x 10 hardcover with probably special treatment of the front cover in terms of raised surfaces, etc.

A few extra notes about the anthology. It features over 70 images, including sumptuous title page treatments by John Coulthart. The book is divided into the following sections: Holy Devices and Infernal Duds: The Broadmore Exhibits, Honoring Lambshead: Stories Inspired by the Cabinet, Microbial Alchemy & Demented Machinery: The Mignola Exhibits, The MiÃ©ville Anomalies, Further Oddities, Visits & Departures, and A Brief Catalog of Additional Items. In addition, each section is prefaced by the continuation of a brief frame story I’ve written, and the “introduction” is a reveal of further details about Lambshead not set out in the first volume.

The purpose of all of this was to create contexts for different kinds of stories. So the book includes everything from traditional fantasy to avant garde approaches, as well as stories presented as exhibit descriptions. It’s browsable or, because of the variety of the content, readable straight through.

I thought I’d set out the full list of contributors in alphabetical order, starting with the amazing artists. Most of the art is original to the anthology, including four new pieces each by Mike Mignola and Greg Broadmore. Jake von Slatt actually built two new pieces for the anthology. The plan is that readers will have a chance to win one of the pieces—not a photograph of it, the actual artifact.

3 comments on “The Thackery T. Lambshead Cabinet of Curiosities…Revealed…”