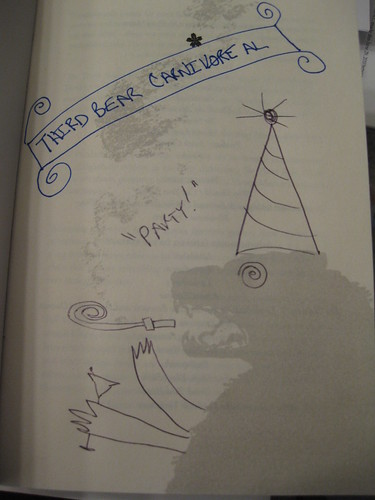 (Click here for music feature, free downloads, and other linkage.)

Novels have secret lives and extended lives, periods of initial interpretation and re-interpretation that accrete around the actual writing, initial publication, surges in interest or of dis-interest, and new editions. Novels become like scarred and barnacle-encrusted ships. Eventually theyâ€™re refurbished, perhaps even given a re-enforced hull, or they chug along in a state of ever-more apparent neglect. Sometimes, too, theyâ€™re left in dry dock, scuttled, run aground by false lighthouses, or pulled apart for salvage.

Short stories (and novellas) endure a different fate, one more akin to the process by which sea turtles reproduce. Hundreds of eggs are laid and eventually hundreds of baby turtles hatch and frantically make for the sea, many of them getting picked off by birds or crabs. Once they reach the sea, even more get eaten by fish and other predators. Some run afoul of fishermenâ€™s nets after they reach maturity. Short stories, by dint of their initial appearance in magazines or anthologies, are more like sea turtles than ships. Some never make it out of the shell. Those that do frantically seek publication, but only a few make it that far. Of the ones that do, most are destined to be ignored and never heard from again. Only a handful make it all the way to some kind of prominence or recognition.

That may be stretching a metaphor to the breaking point, although I like the image of stories like baby turtles flopping down the beach to the sea. But it is true there is a process of attrition on the route to publication, and even afterwards.

Thereâ€™s also a process of evaluation and re-evaluationâ€”of initial, layered perception followed by a quality of renewed encounters. After first publication in a magazine or anthology, a story undergoes public interpretation through the medium of reader blog entries, tweets, and facebook status messages. It also encounters and is analyzed, and in the process of analysis transformed, by the formal reviews it receives from various media outlets. Depending on the method of publication, there may be multiple interpretations or only one or two. Depending on the authorâ€™s credentials, the story may have started from a baseline of expected enjoyment or one of indifference–or worse. (Indifference often requires active thought to reach a state of inaction.)

Throughout this process, as through the process of having a novel made available to readers, the conclusions reached may either solidify around one central story or plotline (this is great/this is subpar) or may diverge wildly as to the determination of quality, intent, and strengths versus weaknesses.

However, this is only part of the process for a short story. The narrative defining it or any piece of fiction can be altered by one prominent review, one powerful Adopter or Dis-enchantee, at which point, human nature being what it is, the fiction in question is now transformed again, for the better or the worse, in the collective perception. Awards seasonâ€”including publication in yearâ€™s best anthologiesâ€”can also alter this narrative, raising up what was forgotten or dismissed and ignoring what was originally considered better or more original. The public perception shifts yet again. (The story, it must be noted, hasnâ€™t changed by a single word.)

Following this cycle, a rare story or novella may become so popular it lives on, regardless of it being perceived as part of the past, through the reanimation of reprint anthologies and further commentary by readers and reviewers. But most stories at this point, to use a different analogy, enter into a kind of stasis. Theyâ€™ve flared up briefly, their light has been acknowledged to some degree, and then, flickering out, they descend to the firmament, to become part of the sedimentary layer of speculative fiction.

Stories come out of stasis and are subject to another round of interpretation when they are placed in the context of a collection. Sometimes theyâ€™ve been inactive, inert for years before this occurs, and part of their re-interpretation occurs because readers or the publishing environment has changed. Thus what was shiny and new five years before can now appear stilted, too mannered, or blind to current social realities. Thus what was seemingly incomprehensible or â€œtoo weirdâ€ or seemingly irrelevant can now appear to be prescient or cutting edge.

However, a second type of re-evaluation occurs because of the nature of a short story collection. The stories in a well-considered collection communicate with one another, and create associations between one another that changes perception of individual tales. The repetition of theme or subtextual elements, even the subtle repeating of a charged/symbolic image, can spark a flame in a readerâ€™s mind that becomes a fire across several stories. Patterns emerge that are either pleasing and stimulating and encourage questions and a certain open-endedness or patterns emerge that close down discussion, with repetition seeming like a grinding slog. The fire stimulates and feeds the imagination, or it burns everything down leaving a blackened field.

A collection also allows for readers to revisit stories. That which in a possibly hurried online skim seemed either obvious or too luminous for its own good can, on a re-read, provide great satisfaction to a reader. The connections or possibilities that the writer embedded in a story may, in this context, now haunt a reader rather than confound. In all ways, stories at this point will reveal their true nature—and whether they were meant to be read once or twice, or multiple times. Then, too, the reviewers will render their opinions, often different reviewers because the story appears in a collection rather than a magazine, and because some of the reviewers have changed in the interval between initial publication and inclusion in a collection. The author has also changed in the interval, and widely held perceptions of the author and their work have shifted over time, creating potential good will or indifference that did not exist before. Once again awards season will change perceptions. And on it goesâ€¦

Consider, for example, my 2010 collection The Third Bear, which has been blessed with blurbs from Junot Diaz and Mike Mignola, along with starred library journal reviews and year’s best mentions. The stories in it that have had the most distinguished initial publication history are not necessarily the ones now most lauded as part of the collection (â€œThree Days in a Border Townâ€ or “Fixing Hanover,” easily the most popular story pre-collection but not much remarked upon in Third Bear reviews.) Stories that were passed over for awards or for yearâ€™s best collection are now praised highly. (“The Goat Variations”; â€œAppoggiaturaâ€ is the best story I will ever write, but I donâ€™t get to establish the record…) Stories that appeared in indie press publications and received little comment at the time now have a powerful effect. That which was deemed too experimental before, and branded â€œdifficultâ€, is now hardly remarked upon, the barriers to the reader apparently now dissolved simply by the passage of time. I am either a startling new talent or an accomplished old hand demonstrating mastery. Then, too, you tinker with the stories, and sometimes even cutting a paragraph or re-arranging exposition can make a story burn more brightly for readers.

Is it telling that the story causing the most confusion is â€œThe Quickening,â€ the only one written specifically for the collection? Perhaps. Perhaps not. It comes with no bona fides, like prior publication or acclaim, but it is also deliberately open-ended, about a talking rabbit that may not be a rabbit. How will this story settle into reader and reviewer imaginations over time? Will it become a comfortable fit, or will it ultimately be rejected? Will it be included in some omnibus collection of my fiction a decade from now and pointed to as an example of something, or will it wind up not making that cut? I donâ€™t know. I donâ€™t even know how Iâ€™ll feel about the story in another year.

Certain kinds of stories do continue to live on for the writer as well as the reader, and the writer goes back to them more than once looking for that initial thrill of discovery that went into the writing of them, looking to see if theyâ€™ve changed, if theyâ€™re something different now. So that in creating a collection, a writer is also re-entering the process, re-evaluating the work, hoping it will still surprise. The writer is also re-visiting the secret autobiography of a period of timeâ€”in this case, for me, the past five years, and stumbling across the signs and symbols that constitute an encrypted diary or journal readable only by the writer.

For me, personally, too, over the past five years, my writing style has lost some of its baroque qualities, trading them in for stealth, for working harder at making sentences do five or six things at once. Once, I wouldâ€™ve traded everything for just one more eye-popping boschian detail. This isnâ€™t a dishonorable intention, but now Iâ€™d like to trade everything for quite different results. That transition is documented in this collection.

Iâ€™ve been very humbled and happy with the response to The Third Bear—it has largely accreted and cemented reader satisfaction with the stories, and this process is still occurring now, six months after publication, with readers encountering the book and being energized enough by it to blog about it—some of those recent responses noted below.

Iâ€™ve delved into these cycles of reader and reviewer interpretation of stories because I find perception shifts fascinating as a writer, especially as a writer who obstinately achieved book publication by ignoring the naysayers and years of rejectionsâ€¦only to have the same material widely praised upon publication. And also to explain why I do not necessarily put much stock in any individual opinion, or even trends of opinion, about a particular piece of fiction Iâ€™ve had published, especially short stories and novellas—nor even stock in the initial high or lower status of the eventual place of publication.

I always try to remember upon initial publication of a story that this publication is only the start of a much longer cycle, and that while I can celebrate when something seems to initially capture reader or reviewer imagination, I should conversely not be particularly dismayed if a story I believe to be strong doesnâ€™t catch on immediately. Remembering all of this makes it much easier to move on to the next story, and the one after that. The only real way to navigate the world is to continue to write whatâ€™s personal to you and to serve your readers and reviewers by appreciating the privilege of their attention while not catering to its positive or negative conclusions.

Appreciates the interconnectivity and strangeness of the collection, with emphasis on “The Third Bear,” “Errata,” and “Appoggiatura,” by a friend who read the collection in manuscript.

Appreciates the craft and imagination, with emphasis on several stories.

Appreciates the weird qualities and focuses on, among others, “The Situation” and “Shark God”.

Appreciates the texture of the stories and focuses on “The Third Bear,” “The Situation,” “Errata,” and “The Goat Variations.”

Appreciates the range and focuses on “The Surgeon’s Tale” (collab with Cat Rambo), “The Third Bear,” and “Errata” while calling the disturbing story “The Quickening” “amusing.”

Appreciates the deeply unsettling nature of the collection with special emphasis on “The Situation”. (Linked to from his year’s best list.)

Appreciates the nightmare qualities of the stories.

5 comments on “The Third Bear: The Lives of Short Stories”