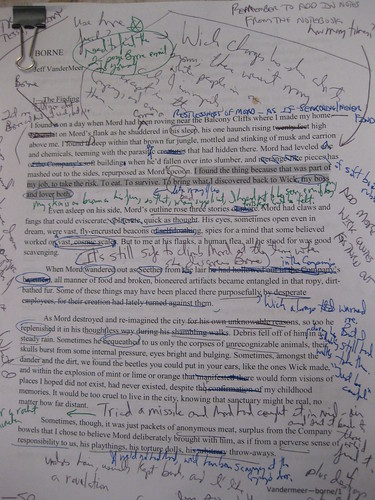 After helping Ann deliver the Lambshead Cabinet antho, I’m back on track with my novel Borne.

In case anyone thinks writing a novel is a swift or easy thing to do, above find the marked-up first page of Borne above. I think it’s safe to post this since I’ve posted a version of this opening before.

Process-wise, I originally wrote the description of Mord in this post-apoc city with no real sense of the character’s point of view. I was more interested in getting down the description/details and making it a tactile, real experience. So I polished that until it was in shape for that initial, very simple purpose.

But, as usually happens, you get a deeper sense of character as you write, and have to go back. Somewhere around 10,000 words, the character clicked into focus and the next 10,000 words were different in style and voice. I let that run out to about a total of 35,000 words before coming back to the beginning, just so I’d have enough text to work with.

Now that I’m going back over the manuscript frag, that first 10,000 will change radically in voice as well as structure, and that will affect the next 25,000 because some stuff that occurs later in the novel will be placed closer to the beginning and the whole thing will eat itself and regenerate along different lines. Among the things that entails is fleshing out a character called the Magician, researching the history of traps, and reading Mike Davis’s Dead Cities.

The page above had gone through five drafts to get the description down, and now I’m ripping up the floorboards and constructing a different kind of room, so to speak. Some changes have to do with the narration, some with moving around information, some with setting. And in more than a few places this draft had way too many words better suited for an essay. I was much too in love with the descriptions, which would work perfectly well if this were a short-short. But it’s not. It’s the opening of a novel that is supporting, foreshadowing, and setting up many different things. In an odd way, it has to be simpler to become more complex. And, since I now know I’m writing a novel not a novella the opening can simultaneously convey less pure information since I have more space to add in what needs to be added in to properly contextualize.

A lot of this may seem bloodless in the way I’m describing process, but it’s actually an extremely personal, intimate, and emotional type of drafting, as my aim is to remain true to character and to the integrity of the events that should occur. There are also issues of balancing types of scenes, as the past is integral to the present of the story, but big lumps of past inserted incorrectly will, from the reader’s point of view, just slow down the story. So they must be correctly connected to the other scenes, including transitions that aren’t arbitrary or surface but hardwired and integral to the narrative.

All in all, just another day on the job, and immensely satisfying. But: requiring patience. Shortcuts and thinking something is done when it isn’t are killers to drawing out the full potential of a manuscript.

9 comments on “Borne in Progress”