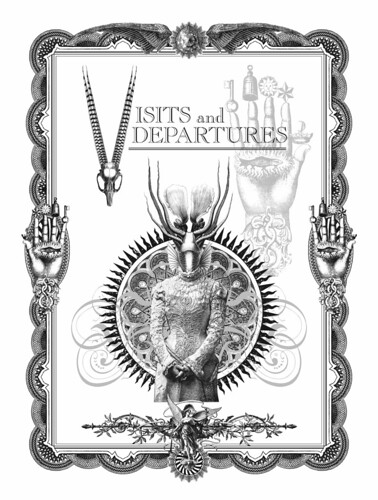 (One of John Coulthart‘s remarkable section title pages for the anthology.)

Ann and I turned in the final manuscript for The Thackery T. Lambshead Cabinet of Curiosities (June 2011) today, in the midst of some plumbing catastrophies at the house and a lovely encounter with a couple of roving pit bulls. In addition to finalizing the introduction, creator bios, and standardizing some references, we added in Charles Yu’s awesome contribution, “The Book of Categories” and received China Mieville’s equally awesome “The Dust’s Warning: Pulvadmonitor”.

As we had hoped, the expanded context and flexibility of moving from the fake diseases of the first volume to the artifact-based stories of this second volume has resulted in a corresponding widening and deepening of emotion and experience in the fiction. Certainly, this book will be fun and entertaining, but Ann and I also think it’s provided a showcase for some stunning creators to show the full gamut of what’s possible in fantasy fiction. There’s everything from the traditional to the avant garde, bound together by the conceit and the presence of Lambshead. We think this might be the best anthology we’ve ever done.

Haven’t even mentioned the art, have we? Originals from Mike Mignola, Jan Svankmajer, Greg Broadmore, Yishan Li, Myrtle Von Damitz III, Jake von Slatt, J.K. Potter, Rikki Ducornet, James A. Owen, Ivica Stevanovic, John Coulthart, and tons more. In all, 25 artists are included, with over 65 pieces of art, and 30 writers, with another 34 contributing mini-entries in the Catalog section. So, basically, about 90 contributors (!!). The entire table of contents will be revealed on a prominent pop culture site in a week or two. (Did I mention Mike Moorcock’s hilarious story? Or Naomi Novik’s take on Lord Dunsany? Or Minister Faust’s Tesla invention? Or Ted Chiang’s mechanical nanny? The mind boggles.)

This concludes the book-delivery part of our schedule for 2010. It’s been a somewhat ridiculously productive year. Between January and November, we delivered Steampunk Reloaded (Tachyon), The Weird: A Compendium of Strange & Dark Fictions (Atlantic–750,000 words!), and now the Cabinet for HarperCollins. Not to mention my fiction collection The Third Bear, a nonfiction collection titled Monstrous Creatures, and the coffee table book The Steampunk Bible (with S.J. Chambers). Ann helped out a lot with all three of those, in addition to turning in three issues of Weird Tales and all kinds of other stuff. I also completed 40,000 words of my novel Borne, and Ann started work on an as-yet-untitled bestiary anthology. In addition to teaching at and prepping for Clarion and Shared Worlds. Oy.

So, yeah, a busy year—possibly one of the busiest yet. Maybe it’s time to take a short break. *Keels over.* X_x.

15 comments on “The Thackery T. Lambshead Cabinet of Curiosities Completed”