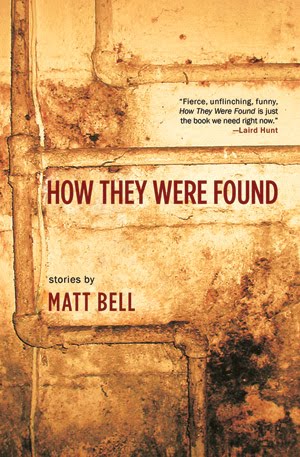 How They Were Found by Matt Bell is the debut collection by a talented story writer whose work often straddles the gap between realism and fantasy or horror. Formally innovative, his fiction has appeared in Conjunctions and Best American Mystery Stories. The stories range from the tale of a nineteenth-century minister creating a mechanical messiah to the documenting of a strange and failing military outpost. In advance praise for the collection, Laird Hunt called it â€œfierce, unflinching, funny.â€

This is the second book selected for review by Larry Nolen, Paul Charles Smith, and myself. You can read the entries on this book by the other two here and here.

Some writers run hot and some run cold. A few by dint of personality and natural inclination manage to achieve both effects at a high level of achievement; Iâ€™d argue that Vladimir Nabokov is a good example of a writer who has both hot and cold attributes. By which I mean that he can evoke great pathos and drama, is unafraid to unleash great passion onto the page, but he can also be understated and restrained and indicate emotion through its absenceâ€”be in a sense removed from the text. Each approach has its pros and cons in terms of what types of stories you can tell, but in most writers this aspect of heat or chill is hardwired into their psyche, into their worldview. Variation from the core approach is possible, but thereâ€™s always still a core of chill or warmth.

Matt Bell, at least on the evidence presented in How They Were Found falls somewhere on the cold end of the fiction spectrum: a writer whose work is always architecturally interesting, exhibiting at times a reliance on deconstruction or reconstruction of story elements. His fiction depends for its effects on absence and removal and leaving narrative gaps that suggest elements of story or character. There are some surface similarities with the fiction of writers like Brian Evenson, but Evensonâ€™s tone and approach seem more balanced between hot and cold by dint of his use of quietly subversive black humor and tendency toward documenting darkly absurd situations.

In some ways the formal experiment â€œAn Index of How a Family Was Killedâ€—with entries from A to Z like â€œCamera, fear of, need for. To document the bodies, to show the size and location of wounds, to produce photographs to explain the entry and exit points of weaponsâ€—exemplifies Bellâ€™s strengths and weaknesses as a writer at this point in his career. In its fidelity to the form of an index cataloguing the killing of a family, the story is in a way too faithful, too architecturally perfect. It needs, even demands, either the kinds of digression that would turn this family from a generic unit into a portrait of real, specific people and or the kinds of digressions that might disguise the functional aspect of the entries. It needs this even as the reader appreciates the strengths of what is on display: a fragmentation that in a sense mirrors the subject matter and a smattering of great specific detail. In one sense, thereâ€™s a sense of a virtuoso writer skillfully creating story out of scraps. On the other, the sense of entering a cathedral thatâ€™s empty.

A story like â€œThe Receiving Towerâ€ reminds me in tone of Stephen Graham Jonesâ€™ amazing â€œLittle Lambs,â€ among others, but has its own starkness and strength. The mysteriousness of some of the events in the story, the sense of unspoken ritual, the broken ending, is compelling, and enough to satisfy the reader without the kind of traditional story arc or shape another writer might have given to the same material. Itâ€™s also one of the stories where emotion leaks into the text through the first-person narrator, to good effect. Another of the strongest stories, â€œThe Collectors,â€ which previously appeared as a stand-alone chapbook, includes lists of objects in a way that has a cumulative effect in part because the story makes a strange family come to life through these descriptions.

By contrast, the ambitious â€œHis Last Great Gift,â€ with its cult of Electricizers, cannot quite shake some essential dryness, some sense of characters performing actions preordained by the writer. â€œThe Cartographerâ€™s Girlâ€â€™s obsession with symbols tends to undercut the effect of the story—although we know that the symbols are meant to be integrated with the text, it is hard to shake the impression (the least charitable among available options, I know) that what mightâ€™ve been a good anchor during drafting has become integrated in a way that takes too much attention from the narrative itself. The rest of the stories alternate between success and almost-success in similar ways.

Curious things happen when you put together a story collection: strengths of narratives can become weaknesses through repetition, or, conversely, can shore up and accentuate those strengths to create a greater whole. Thereâ€™s a real tension in the decision-making process: what kind of a selection will enhance cohesion and focus while also avoiding sameness of approach. (This is all aside from the essential question every story writer needs to ask: When do I have enough worthy and usefully interlocking material to publish a first collection?)

In terms of approaches to structure, How They Were Found is endlessly adventurous and inventive. There is also an admirable aspect of holding firm to seriousness of intent. But the result also means thereâ€™s a kind of tightness across the span of the book. Part of this tendency might be related to a lack of humor in Bell’s fiction—and I donâ€™t mean slapstick guffaws, but a lack of the kind of absurdity you find in Kafka, which creates by its introduction and the point of view expressed, a kind of fluidity and a suggestion of greater depth. (I bring this up to not suggest that one writer be more like another writer, but as an example pointing toward something missing, the source of a lack I can’t quite put my finger on.)

Bellâ€™s How They Were Found is a worthy grouping of stories, but Iâ€™m not sure they benefit by being in communication with one another in this particular way, and for this reason while I recommend picking up the book I also donâ€™t recommend reading it straight-through. What does seem clear is that Bell, here, at the start of his career, displays the kind of intelligence, self-awareness, and care with regard to his prose that suggests he may become a major talent.

4 comments on “Triple Review: Matt Bell’s Story Collection How They Were Found”