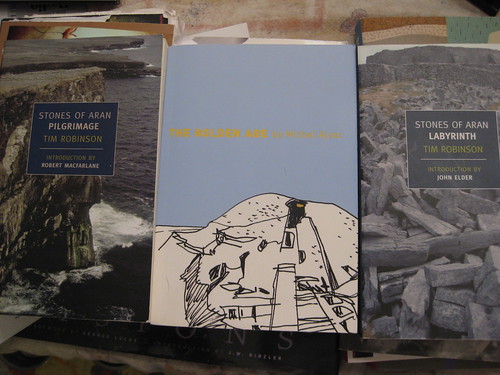 What do we mean by slow- versus fast-paced in the books we read? What is the nature of “action” versus “introspection”? Where do nonfiction and fiction have commonalities and interstices?

These are just a few of the general questions I have been asking myself as I re-read and savor Michal Ajvaz’s The Golden Age, a novel about an imaginary island in the Atlantic and begin to read for the first time Tim Robinson’s two-volume Stones of Aran, Pilgrimmage (his trek around the edge) and also Labyrinth (his journey in the interior), about the Aran islands off the coast of Ireland.

Both the Ajvaz and the Robinson are meditations of a sort, both are recursive, both encompass folktale, history, biology, anthropology, geology, architecture, and a myriad of other elements to tell their stories.

Readers who glut themselves on one type of book—thrillers, for example—will need to adjust to the pacing of both authors. However, read in concert, the Ajvaz and the Robinson place the reader in a different context with regard to pacing. The Robinson is so wonderfully and intensely poetic, without being in the least bit florid, that you must read and re-read each chapter for fear of missing something. The Ajvaz has a kind of dreamy intensity, with a specificity that lies somewhere other than the landscapes.

The effect is as if Robinson were the rock you hold onto to in the middle of the Ajvaz River, which glints and glides along hypnotically. You can better appreciate the pacing of the Ajvaz in the context of Robinson, and you soon begin to notice the changes in that pacing much more acutely than if you had paired the novel with, say, Elmore Leonard.

Similarly, the Ajvaz, with its somewhat different focus and different idea of specificity of detail, complements the Robinson by its blurring of fact and fiction, so that in returning to the Robinson you look for fiction in the fact, and you expect story where normally you would see only description.

Which is to say, you have now entered the real-time of the authors’ vision, no longer resistant, and now that you’re synched to it, you are able to appreciate the amazing, strange, and at times transcendent treasures to be found within each book.

Which leads me to the question, what juxtapositions in your reading have you found most useful, unsettling, or revelatory?

One comment on “Interesting Juxtapositions: Michal Ajvaz’s The Golden Age and Tim Robinson’s Stones of Aran”