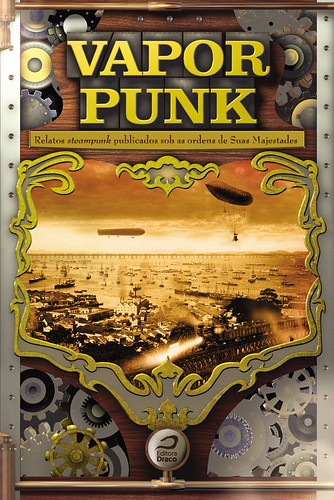 UPDATE: Great post on Tor.com by Amal El-Mohtar, that I love for its comparison of Steampunk and heroic fantasy along with the idea of breaking Steampunk up into tiny bits to see how it ticks. And then NPR weighs in on the Stross, although their post title kind of misses the point.

Bear with me–there’s a lot to talk about, and it’s a bit rambly…

Charlie Stross has a really thought-provoking and often spot-on blog entry that’s basically about feeling supersaturated by Steampunk. He’s sick of it, and especially of escapist versions of it. (There’s also a totally separate but related discussion to be had here regarding “commercial” versus “literary” fantasy/SF, to the extent such terms can be defined, and escapism versus realism. What’s acceptable? When do we find it fun and when do we find it icky? Is it consistent? Since there’s a lot of escapism readers seem to have no problem with whatsoever.)

Anyway, I can sympathize, since Ann and I spent a fair amount of our time earlier this year reading for Steampunk Reloaded to bring readers the best of the last decade…and I’m burned out on Steampunk. That’s one of the hazards of being an editor, exacerbated by the work S.J. Chambers and I did on the Steampunk Bible recently. I am really proud of both books, but I can’t look at another word of Steampunk right now.

That said, I think Stross’s post, as one of the waves of periodic backlash against Steampunk, while serving as a good reminder and general corrective, fails to take into account that there is a decent amount of socially and politically aware Steampunk out there, even satirical Steampunk (much of it at the short length captured in our antho). Indeed, my own “A Secret History of Steampunk,” original to Steampunk Reloaded and featuring additional contributions from Fabio Fernandes, Rikki Ducornet, Matt Cheney, Felix Gilman, Lisa Hannett, Angela Slatter, and others, attempts to recontextualize the Edisonade without ignoring its racism—perhaps what Jess Nevins refers to as “cooking”—while exemplifying the tinker/maker impulse in parts of the Steampunk community that harkens back to Ruskin and the crafts movement, among other artistic impulses.

Stross also seems annoyed at the massive amount of Steampunk coverage on io9.com and Tor.com. I can definitely see his point, but, again, given the timing, this seems a little unfair. Take, for example, Tor.com’s ongoing Steampunk Fortnight. There’s been some really serious commentary mixed in with the lighter stuff. Not just Nisi Shawl’s post (referenced below), but Jaymee Goh on Steampunk and commodification, and G.D. Falksen’s run-down of Steampunk and History with an interesting primer on issues like women’s rights and the plight of the working class in the context of the Victorian era. And, perhaps my favorite post, a wonderful personal essay by Ay-leen the Peacemaker on The Ao Dai and I (don’t miss it!).

I find myself simultaneously agreeing and disagreeing with Stross’s post in large part because of the timing. For the past year Beyond Victoriana and Silver Goggles, SteamPunk Magazine and Steampunk Workshop (for a lot longer), and other sites have been posting a lot of material on the bleeding edges of Steampunk, re-examining Steampunk through perspectives that are anything but escapist—and in some cases reclaiming the “punk” part of the name. (Yep, I’m leaving out sites and foci, but feel free to add your own.)

In terms of international approaches, the Brazilian Steampunk community has been quite active, sparking publication of two anthologies, one of them pictured above. French Steampunk is suddenly ascendent (lumping individual European countries in with the UK is a big mistake, since their traditions in literature and the arts all differ, often significantly), and other communities also seem to be on the rise. Not to mention, on Tor.com, Nisi Shawl recently talked about her own, unique approach to Steampunk and about new approaches to Steampunk generally here, and Yakoub Islam is working on a Steampunk novel titled The Muslim Age of Steam–check out this fascinating post connected to that effort.

All of this new energy, combined with the trend in the past few years for more and more women authors to write Steampunk—the literature better reflecting what seems to be a rough gender parity in the related subculture—makes it seem like this is the best time to be entering into a dialogue with Steampunk as a reader or writer, despite my jaded statement above. You could even say that to some extent the forthcoming anthology Steam-Powered , focused on lesbian characters and featuring great new writers like Shweta Narayan, N.K. Jemisin, Amal El-Mohtar, and Matt Kressell, is just one early natural result of such energy and discussion. I expect there will be others. In fact, despite the barrage of near-constant Steampunk posts and references, this is one of those times in the history of a subgenre where it simultaneously creates echoes or copies of copies of itself while also entering into new and interesting spaces. In part this is because Steampunk now offers an important entry point for writers interested in innovation precisely because it has become commercial–potentially, you can use “Steampunk” for seriously weird, beautiful, unique, non-trad material because it’s an acceptable delivery system that publishers have begun to be able to market effectively. (“New Weird” had a similar if much more limited effect in the early aughts, in part because it was too single-platform in terms of media and in part because it didn’t make a good mimic.)

I should note, perhaps ironically, that I don’t write Steampunk (despite one story I call “anti-steampunk,” “Fixing Hanover”) but have been so deeply involved in documenting it that I find this crossroads fascinating; I do realize and respect that I may have a slightly different perspective than those more personally involved with it.

Anyway, perhaps the most important reason for this post is to announce that—as part of the idea of using the aircraft carrier that is Steampunk Reloaded to escort and give visibility to other ships, er, texts—we’ll be offering not only Jacques Barcia’s “A Life Made Possible Behind The Barricades” (check out his story in a recent Clarkesworld) as a mid-November online supplement to the anthology but also translations of the beginnings of all of the stories in the recent Vaporpunk antho (a combo of Brazilian and Portuguese authors). These latter translations are courtesy of Fabio Fernandes and Larry Nolen, and meant to give English-speaking readers a taste of what Brazilian Steampunks are up to. (And, hopefully, lead to full-on translations of some stories later on.) Many, many thanks to Larry and Fabio for that. Barcia’s story will later appear in the second Apex Book of World SF, btw. 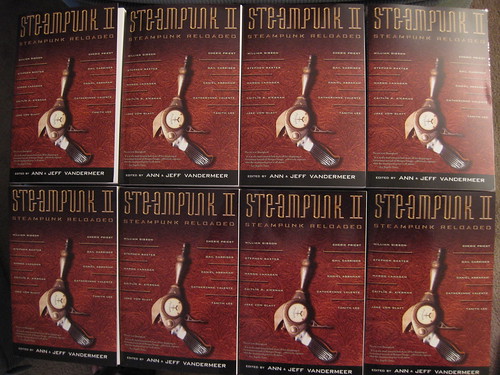 (The antho has reached bookstores faster than expected, but contributors never fear: we are in the process of sending out your copies.)

21 comments on “Of Steampunk Reloaded, Backlash, and Vaporpunk Translations”