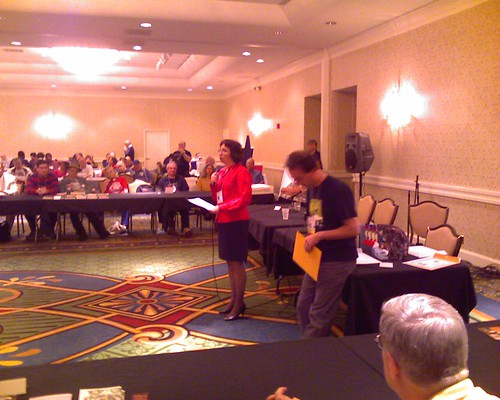 (Ann VanderMeer at Capclave prior to announcing the awards, with Neil Clarke)

Weâ€™re pleased to announce the winners of the second annual Last Drink Bird Head Awards. The purpose of the awards is to celebrate those in the genre community who enrich us with their time, energy, and words, for causes greater than themselves. (Finalists here.) The winners for activities in 2009-2010 were announced at Capclave in Washington D.C. on the evening of Saturday, October 23, in conjunction with the WSFA Small Press Award ceremony (winner â€œSiren Beatâ€ by Tansy Rayner Roberts, published by Twelfth Planet Press, edited by Alisa Krasnostein). Neil Clarke and Ann & Jeff VanderMeer presided over the ceremony. Winners receive a bird head figurine, a certificate, and chocolate.

Winner: Ay-leen the Peacemaker (for Beyond Victoriana)

Tireless Energy
In recognition of individuals who selflessly give of themselves for worthy causes, websites, or organizations…

Winner: Colleen Cahill (for Library of Congress work as a genre fiction advocate and as the libraryâ€™s representative to the ALA)

Expanding Our Vocabulary
In recognition of writers whose nonfiction, through reviews, blogging, and/or essays, exposes readers to new words and, often, new ideas…

International Activism
In recognition of those who work to bring writers from other literary traditions and countries to the attention of readers in North America, the United Kingdom, and Australia…

Winner: L. Timmel Duchamp – The Special Achievement Award is geared toward recognizing individuals who are proactive behind the scenes but whose efforts often donâ€™t receive the measure of public recognition they deserve. The winner will receive an elegant Hieronymous Bosch bird-with-letter figurine, a certificate, and chocolate. The award is named after the first yearâ€™s winner, publisher and editor Neil Clarke. As founder of and editor for Aqueduct Press, L. Timmel Duchamp has demonstrated great creativity, care, and love as the guiding force in creating a strong line of feminist science fiction and fantasy. Although Aqueduct Press is a for-profit publisher, it serves a greater purpose in providing a valuable space for womenâ€™s fiction, often publishing otherwise marginalized authors. Further, Duchamp has often set aside her own career and fiction over the past five years to run Aqueduct Press. For these efforts, she is the 2010 recipient of the Neil Clarke Special Achievement Award. 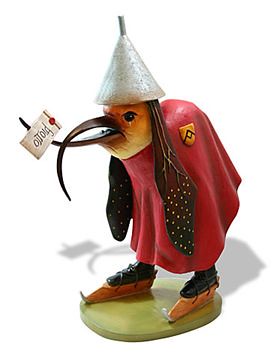 The awards are named after the anthology Last Drink Bird Head from Ministry of Whimsy Press (an imprint of Wyrm Publishing). The proceeds from the anthology benefit the ProLiteracy charity. Contributors include Peter Straub, Ellen Kushner, Gene Wolfe, Tanith Lee, and over 60 others. To buy the Kindle edition, click here. To buy the limited hardcover and support literacy, visit the order page.

Special thanks to Capclave for hosting the awards this year, as well as to Michael Swanwick, accepting the award for Leslie Howle, and to Anne Sheldon, accepting for L. Timmel Duchamp.

Ay-leen the Peacemaker: “I’m very humbled to be nominated for this award, because Beyond Victoriana wouldn’t be as thought-provoking or insightful without the amazing people I’ve worked with. So really, this award doesn’t just belong to me, but an entire team of thoughtful contributors who have dedicated their time and effort to its content. And, coinicidentally enough, today is also marks the first year anniversary of Beyond Victoriana (yay!), so I can only look forward to working with more wonderful folk in the future.

“So, in no particular order, I’d like to thank the following people: Jaymee Goh, Matt Delman, Evangeline Holland, Michael Redturtle, Noah Meernaum, and Kevin Mullins for your emails and your contributions; The Wandering Legion of the Thomas Tew, Jake von Slatt, Mike Perschon, Allegra Hawksmoor, Leanna Renee Hieber, Karin Lowachee, Kevin Steil, Jeff VanderMeer and SJ Chambers for your continuous support; all the wonderful artist, creators, and steampunks I’ve met in the community through this site; the readers; my family for tolerating my weirdness; and lastly but mostly lovingly, my fiancee Ashley Rogers.”

Leslie Howle:
“I want to thank Jeff and Ann for finding a way to acknowledge all the work that people do to support the literature of the imagination.

“I’ve worked many years as Workshop Administrator/Director for Clarion West, and in this last decade, was fortunate enough to also work as a manager on the start-up team at the Science Fiction Museum and Hall of Fame as well as start my own non-profit dedicated to speculative fiction writing workshops and readings through Richard Hugo House.

“This is not so much a function of tireless energy as it is the fact that all of the talented writers, readers, artists, and other imagineers Iâ€™ve had the good fortune of working with and learning from stoke the fire that keeps my motor running. Iâ€™m excited and engaged by all the new work being published by both beginning and established writers.

“I’ve worked with and been supported by a great team of volunteers and board members at Clarion West. I wouldn’t have accomplished these twenty-plus years without all of them and the support of my previous Co-Administrator David Myers, and current Co-Administrator and friend, the remarkable Neile Graham.
”
We live in troubled times, and more than ever need science fiction and fantasyâ€™s ability to serve as a politically subversive medium for commentary and cautionary tales. I love this community and do this work because I believe that what all of you do goes beyond entertainment. Itâ€™s important and meaningful. You hold a mirror up to humanity and ask who are we? You ask what if?

“I believe in you and I got your back. Thanks.â€