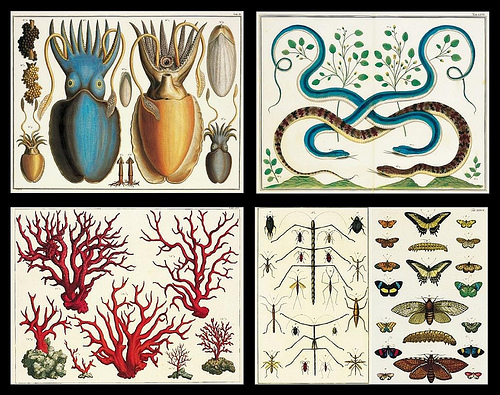 The results are in, and Ann and I have made our decisions, out of over 250 entries, as to which micro-submissions from our open reading period will be included in The Thackery T. Lambshead Cabinet of Curiosities (HarperCollins, July 2011). Without further ado, here they are:

Each contributor will receive a copy of the anthology as compensation, and we will be emailing you with a contract and any copy-edits (yes, some will need editing) in the next week or so. Contributors to the anthology include China Mieville, Tad Williams, Helen Oyeyemi, Holly Black, Yishan Li, Garth Nix, Mike Mignola, Minister Faust, Ted Chiang, Cherie Priest, Reza Negarestani, Caitlin R. Kiernan, N.K. Jemisin, and so many more weâ€™ll forget some, so click here for the full-on list (minus a few we canâ€™t announce yet).

Congratulations not just to those who got in, but to everyone who submitted entries. Ann and I spent two sessions at home reading and re-reading through all of the entries. It was extremely tough.
When we had gotten it down to about 60 possibles, we decided a change of scenery would be a good idea and we high-tailed it to Siam Sushi , a great new restaurant here in town, and we spent another five hours whittling it down to the final thirty-plus.

A lot of different criteria went into our decision-making, and we left a lot of excellent material on the table. One constraint was needing to top out around 3,200 words. Another was making sure entries didnâ€™t duplicate material in other parts of the anthology, and being careful not to take material that violated the rules of Lambsheadâ€™s milieu. We also tried to avoid duplicating items too much, although obviously looking at the winnerâ€™s list we need to have a separate case just for bones. Still, we did largely avoid too many mysterious boxes and too many ghosts, despite the high quality of many entries. (Typos and even grammatical errors we ignored as reasons for dismissal, as that can all be cleaned up with a good stiff copy-edit.)

We also tried to look for variety in terms of length of entry, and try to make sure longer entries truly supported their initial concept by opening up and expanding on ideas in a satisfactory ways. A few very short entries worked well by getting in and getting out with the necessary speed. Some, like Bear Gun, were just plain hilarious, while others, like American Night Quilt and Mother of Spirits, displayed nice use of detail and no one submitted anything quite like them. The Untitled Booklet’s conceit of a publication that was actually an insect struck us as brilliant, as did Rhys Hughes’ Reversed Commas box. Others, like Ear Eye and Coffin Torpedo, had us at the title, and luckily held up. We took the baldly humorous and the oh-so serious because the good doctorâ€™s cabinet can incorporate both extremes. But, we digress…

Above all, we agonized, and went back and forth, and tested and re-tested entries. We had a really great time reading it all, and weâ€™re thrilled to be introduced to so many writers we didnâ€™t know about beforeâ€”weâ€™re taking notes and writing down names.

Thanks for putting yourself out there with such a public submission process. Thanks also to our editor Diana Gill, Will Hinton, and everyone at HarperCollins, who so enthusiastically endorsed the idea of having this open reading period. We feel that the idea may well continue to reverberate beyond this one project. And we’ll include the URL to all of the entries in the anthology (another detail to remember!).