After three volumes, weâ€™re discontinuing the Best American Fantasy series founded by me, Ann VanderMeer, and Sean Wallace, along with Matthew Cheney. The amicable move from Prime to Underland following the publication of BAF2 was meant to rejuvenate the series and to finally achieve stability for it. Unfortunately, this didnâ€™t occur, for a variety of reasons. BAF did not having a wide margin for error. A cross-genre fantasy yearâ€™s best that focused not just on genre magazines but also on literary magazines, that required sympathy and generosity from both the mainstream and genre, as well as the right placement in the chains, was always going to be a difficult sell.

Although we are disappointed in this outcome, weâ€™re mostly sad for Larry Nolen, the new series editor, and for Minister Faust, the guest editor, both of whom had put work into what would have been volume 4. (Not to mention the extensive online reading completed by Alan Swirsky and Fabio Fernandesâ€™s efforts re Latin America.) It also would have been wonderful to see what the guest editors for volumes 5 and 6, Junot Diaz and Catherynne M. Valente, would have chosen, just as we enjoyed reading Kevin Brockmeierâ€™s selections for volume 3.

On the plus side, the various BAF volumes picked up a wonderful blurb from Michael Chabon, made NPRâ€™s recommended summer reading list, were placed on yearâ€™s best lists, and garnered a few nice reviews in large newspapers. In addition, a lot of bloggers supported us, and we received good feedback from the readers who picked up the books. Many libraries have stocked them, and all three are still available for sale on Amazon, providing a nice alternative view of the yearâ€™s best for those three years. We also made inroads into the literary mainstream through events like the AWP conference, and we were very successful in convincing literary magazines and genre magazines to send us material. In addition, we brought writers into contact with each other who might otherwise not been aware of each otherâ€™s work, and our correspondence with magazine editors and writers while running BAF led to many, many other creative liaisons and projects.

BAF was always going to need time to establish its brand and to reach the intended readership. To do so, it needed to remain consistent in its look-and-feel, its publishing schedule, and its PR. BAF also needed long-term strategies in addition to short-term strategies to reach its objectives. It needed more time and attention from Ann and from me, consistently, across volumes. It needed to be ramped up slowly, with lowered expectations for sales, and build up from year to year. Is there blame to assign? Yes and no. As happens on every project, everyone involved made mistakesâ€”that is part of the learning curve. We certainly now have a better idea of what we would need to do if we started up such a series again, and we are indebted to both Prime and Underland for making a go of it.

That said, weâ€™re still absolutely committed to the idea of erasing the artificial wall between â€œgenreâ€ and â€œmainstream,â€ as evidenced by most of our other projects. We also still believe that SF/Fantasy needs the balance of something like BAF, in terms of guest editors. Yes, you need the continuity and experience of a yearâ€™s best editor whose series runs for many years. But you also need the freshness and different points-of-view created when you have at least one yearâ€™s best series that rotates editors, and draws those editors from a pool of writers rather than professional editors. Mainstream fiction has at least two such series, and it works well in not enshrining one particular approach as the canon.

But, as noted, we got three volumes out, we shone a spotlight on some fiction that might not otherwise have gotten the attention, and at the end of the day, we know we tried hard, despite some lapses. The only option for continuing now would be to put our own money behind it, and that’s alas not possible.

Thanks to everyone who supported us, thanks to the magazines that sent us issues, and thanks also for the help of first readers like Tessa Kum and Clayton Kroh, and Luis Rodrigues who set up the website. (We know weâ€™re leaving out peopleâ€”apologies in advance.) 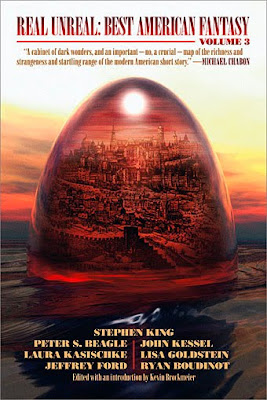