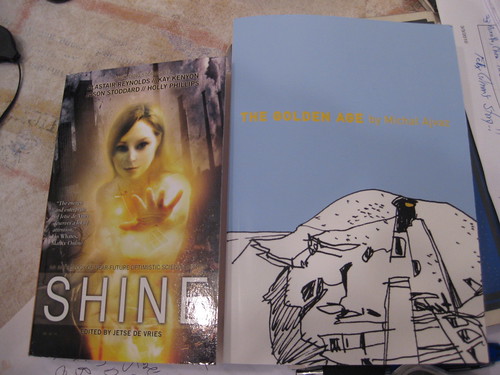 (Why Shine? Well, it just came in the door and Jetse de Vries made a concerted effort to encourage submissions from around the world. It’s a good-looking antho.)

I’d just like to point people to the Locus Online compilation of international SF/Fantasy recommendations I’ve coordinated, which was completed and slotted well before the Spinrad controversy this week. These are largely not books yet translated into English–in fact, 90% of them aren’t–and so in addition to being a tantalizing look at what we’re missing out on, it’s of potential use to US and UK publishers.

Please spread the link–it would be nice to get enough interest in this feature to be able to keep repeating it yearly. It’s a labor of love and of necessity incomplete this year due to time constraints, among other factors. The plan would be to keep expanding it until most countries were covered to some extent. Major thanks to Locus Online’s Mark Kelly, who spent a lot of time finding most of the images and hand-coding foreign-language symbols.

In the meantime, anyone should feel free to add recommendations from 2009 from countries not covered (or covered), preferably with descriptions, either to the Locus Online article or here.

Secondly, a relatively new translation award has announced the winners.

Thirdly, John Klima is trying to start a magazine to showcase under-represented cultures. Go help him.

Finally, I should have Nisi Shawl’s post “Writing and Racial Identity vs. the Spinrave” up on Booklifenow by the late afternoon, EST.