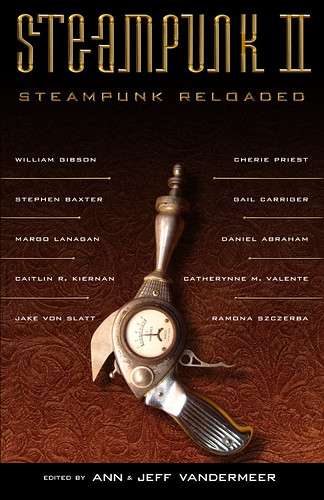 Well, we’ve reloaded Steampunk Reloaded, adding a few things at the last minute that were too cool to pass up. I’ll summarize the additions here, but I’ve also included the entire updated TOC below the cut for those who would like it in context. The anthology, out in October, is now almost completely unbearable amazingness as far as we’re concerned.

What have we added, besides our intro?

—A reprint of Tanith Lee’s “The Persecution Machine,” a Steampunk story originally published in Weird Tales.

—Extensive additions to the already awesome section “A Secret History of Steampunk,” which forms a unified story out of several pieces of fiction, nonfiction, and art, the new bits including:

>>A 5k frame story by the Mecha-Ostrich, Steampunk heretic

>>L.L. Hannett and Angela Slatter’s “The Curious Case of Physically-Manifested ‘Bed-Sheet Mania,” along with related letters and diary entries.

>>Felix Gilman’s “An Ode, on Encountering a Mecha-Ostrich.”

>>Jess Nevin’s “Unpublished Pages from the Encyclopedia of Victoriana.”

A comparison of the TOC below and the original one will also reveal that we’ve re-contextualized a few things. Finally, I cannot confirm or deny that I am the Mecha-Ostrich.

This lavishly illustrated anthology edited by Ann & Jeff VanderMeer builds on the strengths of the World Fantasy Award nominated first volume, presenting 160,000 words of rich and varied Steampunk stories, nonfiction, and art that plays off the idea of Steampunk not just in the context of dirigibles and other antiquated technology but also as connected to the maker movement and other aspects of the Steampunk subculture that have begun to infiltrate the literature. It includes the William Gibson story that inspired the Steampunk offshoot called â€œRaygun Gothicâ€.

Jeffrey Ford, â€œDr. Lash Remembersâ€ â€“ A harrowing tale of Steampunk disease that will make you think twice about jumping into an airship.

Mecha-Ostrich’s frame story “An Account of XY and XX: Legacy Robbed, Information Suppressed, Darkness Victorious” (all other materials in this section discovered in the package Mecha-Ostrich sent to the editors prior to the mysterious explosion)

L.L. Hannett and Angela Slatter’s “Notes & Queries: The Curious Case of Physically-Manifested ‘Bed-Sheet Mania'” with related interrogatories on “The Prisoner Queen,” “The Great Air Ferry Disaster,” and Oyster Rime Spores, and including correspondence related to the Mecha-Ostrich’s inquiries. (Note that “Notes & Queries,” first published in the 1800s, appears to have been the inspiration for Ford’s “Dr. Lash Remembers” (see below).

Felix Gilman’s “An Ode, on Encountering a Mecha-Ostrich: Excerpt from a Strange Children’s story.” Children will never be the same after encountering this piece…

Matthew Cheney’s “Confessions and Complaints of a True Man” – Incontrovertible evidence of Steampunk invention in the time of the American transcendentalists, including mechanized elephants.

Ivica Stevanovic’s “Illustrations from the Serbian Comic Strip ‘American Tinker Under the Influence of Absinthe'”.

—Jacques Barcia’s story from a Brazilian steampunk antho last year, translated from the Portuguese
–Mike Perschon’s short essay on the future of Steampunk