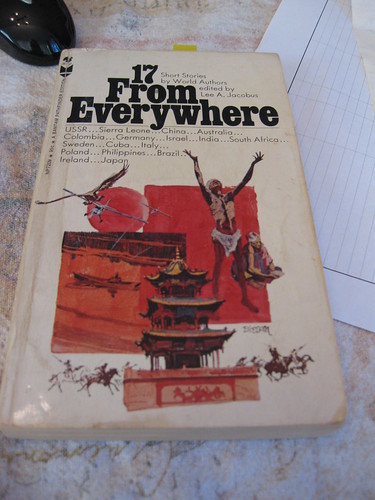 Ann and I had a wonderful weekend at St. George Island, much of which consisted of sitting at the Blue Parrot and sipping margaritas whilst reading for various projects, including the humungous book of weird fiction.

In reading the excellent Foundations of Fear edited by David Hartwell, we were curious to discover the presence of either the word “onion” or “opinions” in Clive Barker’s “In the Hills, the Cities”–and simultaneous with that impulse a guy asked us what we were reading, and it turned out in the 1960s and 1970s he’d known Damon Knight on the beaches of St. Petersburg. Right as my finger pointed to the word “onions” in Barker’s book. While the guy was telling us interesting stories about passing acquaintance with various writers–there being a kind of hidden connectivity to the world, and if you’re going to be reading books with titles like Black Water, more of it will come to the surface–I was thinking about Barker’s phone call to me a couple of years ago, after The New Weird came out. It was a gruff, deep voice, sounding oddly subterranean.

Barker: Jeff? Is this Jeff? This is Cliver Barker.

Barker: I just wanted to say I really liked The New Weird. A great anthology.

Jeff: Thanks. It’s kind of you to say.

Barker: On the last page of the story. It should be “opinions” not “onions”. Last breath and opinions. It’s a typo I’ve been hunting down for over sixteen years.

Barker: That would be a relief. It keeps coming up. Thank you.

Meanwhile, too, stories have been spilling out of me, including the semi-satirical, semi-serious untitled Lovecraft-Borges story I’ve been posting on facebook. (Note that I’ve locked myself out of facebook and am just remote posting the photos of story text from my phone’s email service.) 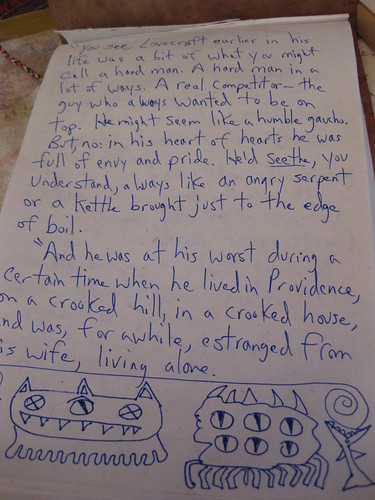 It appears I’ve finally moved past the intense process of creating Finch and Booklife simultaneously. And I think I was right to give myself permission not to write much fiction over the past year. Now, it feels natural, and several different stories and novels and coming up from the subconscious. One, “The Quickening,” will be the sole original story in my story collection The Third Bear. Another, “Borne,” will be either a long novella or short novel. A third, “Komodo” keeps opening up in my mind to the point that what was once perhaps a short story could possibly be two novels. Mostly, I’m just glad to be writing again. it keeps the bees buzzing in my head from getting too loud.

Reading also rejuvenates me marvelously well, and I’ve finally had time for the kind of sustained reading that replenishes the imagination. I credit Bolano’s 2666 with much of the restoration, but also lots and lots of Tove Jansson . Now, though, it’s the reading of countless short stories for our projects that has me excited; rediscovering or encountering for the first time so much interesting material has me (and Ann) really excited.

From time to time, I’ll post either TOCs or short reviews of some of the books we’ve read. Our ultimate goal is to read every fantastical, horrific, or science-fantasy story ever written because we’re looking, long-term, at developing several different projects. Part of accomplishing this impossible goal require repairing the schism created by the idea of genre versus mainstream. Which is to say, fantastical literature, as we know even though we don’t always remember this fact, exists outside of the label “genre” and outside of the genre subculture. As SF/fantasy/horror diversifies and also accepts influence from around the world, it’s important that this other wall gets broken down. It’s harmful to our understanding of what constitutes fantasy, and it’s a kind of a self-imposed blindfold, too.

Here’s the TOC to 17 From Everywhere, published in 1971 by Bantam Books and edited by Lee A. Jacobus. It contains mostly mimetic stories, which comment on and co-exist quite nicely with the few fantastical selections. A wonderful side effect of reading outside of genre-only sources is to be exposed to different approaches and traditions, of course. I’ve also included the opening lines of each story.

“The Foal” by Mikhail Sholokhov, USSR – “He emerged from his mother’s womb in broad daylight, head foremost, his little forelegs stretched out, by a heap of dung thickly plastered with emerald flies.”

“As the Night the Day” by Abioseh Nicol, Sierra Leone – “Kojo and Bandele walked slowly across the hot green lawn, holding their science manuals with moist fingers.”

“Mrs. Li’s Hair” by Yeh Shao-chun, China – “Mrs. Li’s hair had a history. Her husband had won her by writing pretty poems in praise of it, and her friends and relatives would always say, whenever they talked about her, that she had the hair of an authentic beauty.”

“The Wedge-Tailed Eagle” by Geoffrey Dutton, Australia – “Through the hot, cloudless days in the back-country there is always something besides the sun watching you from the sky.”

“Balthazar’s Marvelous Afternoon” by Gabriel Garcia Marquez, Colombia – “The cage was finished. Balthazar hung it under the eave, from force of habit, and when he finished lunch everyone was already saying it was the most beautiful cage in the world.”

“The Poet” by Hermann Hesse, Germany – “There is a story told that the Chinese poet, Han Fook, while yet a young man had a strange and compelling wish to learn all there was to learn about the art of poetry, and to strive for perfection in the writing of it.”

“Parents’ Day” by Dahn Ben-Amotz, Israel – “On the second Sunday of the school year, I went to visit our son, at the boarding school which I attended when I was his age (this was the arrangement my wife and I had made when we decided to separate).”

“The Shroud” by Prem Chand, India – “At the door of the hut, before a fire which had already gone out, sat father and son; inside lay Budhia, the son’s young wife, in the throes of childbirth.”

“The Bench” by Richard Rive, South Africa – “We form an integral part of a complex society, a society complex in that a vast proportion of the population are denied the very basic privileges of existence, a society that condemns a man to an inferior position because he has the misfortune to be born black, a society that can only retain its precarious social and economic position at the expense of an enormous oppressed proletariat.”

“Father and I” by Par Lagerkvist, Sweden – “I remember one Sunday afternoon when I was about ten years old, Daddy took my hand and we went for a walk in the woods to hear the birds sing.”

“The Dark Night of Ramon Yendia” by Lino Novas Calvo, Cuba – “Ramon Yendia awoke from a troubled sleep aching in every muscle. Worn out, he had slumped down over the wheel while the car was still moving, scraping the curb that separated the street from the vacant lot.”

“Visit to a Prisoner” by Ignazio Silone, Italy – “I watched them grow out of the distance along the deserted dusty road—two constables of the military police and, handcuffed between them, a ragged barefoot little man who moved with a hopping and jumping gait, as if attempting to dance some clumsy jig.”

“En Route” by Slawomir Mrozek, Poland – “Immediately after passing N, we went through flat, damp meadows, amidst which a few stubble fields bristled up like the heads of recruits.”

“Death in a Sawmill” by Rony V. Diaz, Philippines – “You can cleave a rock with it. It is the iron truth. That was not an accident. That was a murder. Yes, a murder. That impotent bastard, Rustico, murdered Rey.”

“The Third Bank of the River” by Joao Guimaraes Rosa, Brazil – “My father was a dutiful, orderly, straightforward man. And according to several reliable people of whom I inquired, he had had these qualities since adolescence or childhood.”

“First Confession” by Frank O’Connor, Ireland – “All the trouble began when my grandfather died and my grandmother—my father’s mother—came to live with us.”

“The Hateful Age” by Niwa Fumio, Japan – “At night, if anyone walked along the creaking passage to the toilet, he would invariably be startled by a voice from the darkness: ‘Who’s there?’ It was not the eager voice of someone longing to establish a human contact in the lonely night.”

22 comments on “Everything, Interwoven Together, From Everywhere”