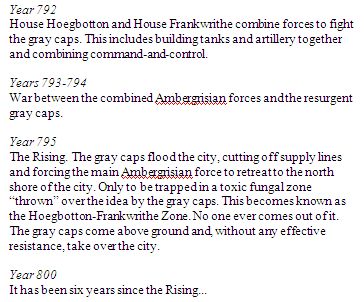 (The timeline I decided not to include–without the context of events in the novel, terms like “Hoegbotton” wouldn’t have any weight.)

As per my post from Tuesday, this is the first of two follow-up entries on the opening of my novel Finch. Finch is set in my fantastical city of Ambergris, but also borrows heavily from such genres as the spy novel, the noir mystery novel, and certain types of political thrillers. In the novel, an inhuman subterranean species called gray caps has risen up to take control of the city and subjugate the human population. As in Paris during Nazi control, the gray caps attempt to give a semblance of normality by providing institutions of order like a police force, even though these institutions are often merely a faÃ§ade or horrible/absurd in nature. Against this backdrop, reluctant detective John Finch must solve a strange double murder.

The discussion that follows is by no mean complete with regard to what the opening of the novel is trying to do. Nor is authorial intent always paramount, in that when readers encounter a text, the text changes. Neither am I claiming the opening of Finch is perfect. I am simply relating the process that led to the final versions of those first two chapters.

You can read the first two chapters here.

To recap, I felt I had four possible entry points to the novel:

(1) John Finch, standing over two dead bodies, at the crime scene. Beside him are his inhuman gray cap boss, Heretic, and a Partial (a kind of traitor willingly working for the gray caps).
(2) John Finch poised at the door to the apartment, inside of which are the bodies, the Partial, and Heretic.
(3) John Finch at the police station, receiving the call from Heretic about the murders, telling him to come to the apartment.
(4) John Finch in some guise giving readers an overview of the fantastical city of Ambergris in which the story takes place before being called to the crime scene.

I tried all four of these approaches, but finally settled on #2.

(An even worse iteration, from very early–Finch wakes up in the morning!)

For this post, letâ€™s consider the options I ultimately didn’t use…

(1) John Finch, reluctant detective, standing over two dead bodies, at the crime scene. Beside him are his inhuman gray cap boss, Heretic, and a Partial (a kind of traitor willingly working for the gray caps).

In a standard noir novel, approach #1 would be a writer’s choice about eighty percent of the time. It’s immediate, it introduces the case swiftly, it creates tension automatically. Usually, you can also get in a lot of initial characterization of the detective’s cohorts. By placing the bodies in the foreground, you also emphasize the arc of the story concerning the investigation and solution of the case. However, if you are interested in creating a hybrid or mutation, or a cross-pollination of forms, the immediacy of this approach has some drawbacks; there’s such a thing as getting to a point too quickly. I abandoned this approach when it was clear I would have to pack too much information into too small a space. I also felt I would be creating the wrong emphasis, for reasons I explore below and in the third post in this series.

(3) John Finch at the police station, receiving the call from Heretic about the murders, telling him to come to the apartment.

In a police procedural with an ensemble cast, there might be a good reason for starting at the station, especially if the call about the murders happened later in the day, allowing another kind of tension to take the place of the reader’s interest in a particular case. However, starting in the station is far too early in the story for most possible story arcs. It’s the kind of approach that a beginning writer is most likely to end up with in a final draft, starting at a point that, because of the interaction between characters, seems to contain dramatic tension but is, in fact, the bridge between actions that usually gets cut–in both fiction and movies. Further, starting at the station would have created an additional demand: getting John Finch to the murder scene. 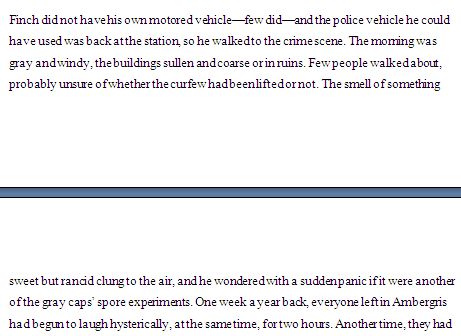 (Another alternate version, this time eschewing the car but still boring.)

In a very early draft, I started with Finch in the station and also wrote a scene of him getting into a car and driving to the murder scene. As I was writing it, I realized there was no tension in any of this, and that the car scene not only established the wrong level of technology–made things too easy–but also served as a kind of travelogue introduction to the city that actually worked against readers buying into the scenario. Still, the writing didn’t go to waste because I was able to recycle elements of the police station scene into the scenes following Finch leaving the apartment. In this context, the reader having already been introduced to the horrors of a gray cap in the flesh, the scene in the station takes on added tension in a way that it wouldn’t have if the reader hadn’t first encountered a gray cap. This is just one example of how the elements in a novel are introduced contributes heavily to reader perception of later elements. 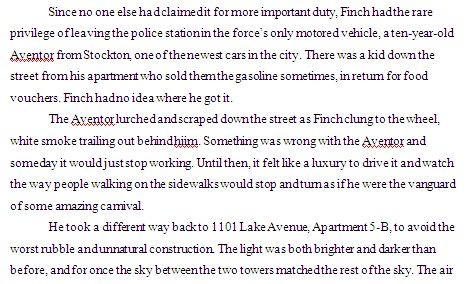 (From later in the novel, another alternative version–Finch gets his car, finally. Still boring. Wrong level of technology.)

Note also that if I had, say, included the gray cap in an opening scene set in the station–if, for example, the gray cap hadn’t called but just appeared there–then the reader would not only be in a strange setting but meeting the main character, his colleagues, and the gray cap all at once. This would have had the effect of canceling out reader attention on important details or a necessity to downplay certain characters or elements. Itâ€™s also, I feel, a mistake in some detective novelsâ€”too many characters around a crime scene, which makes for confusing initial situations, in which the reader has to keep track of too many people. (Why an empty apartment to open? Space.)

(4) John Finch in some guise giving readers an overview of the fantastical city of Ambergris in which the story takes place before being called to the crime scene.

It is my feeling that landscape not invested with emotion or point of view is inert, lifeless. Like a historical novelist, when writing fantasy set in a place not here, I have an obligation to describe that place and make it realistic, but I have an equally important charge not to lard the narrative and the characters with excessive description or description that is not truly related to the viewpoint character. Which is to say that certain things are known to Finch and thus must be given over to the reader and other things that he knows but would not comment on or really register must be conveyed in a kind of shorthand, or conveyed in a context in which he would register them. That includes aspects of the setting, in addition to his interactions with other characters.

Itâ€™s also important to remember that characters are settingâ€”good characterization, in which the character is clearly shaped by environment and situation, reveals a lot of information about your setting.

At the same time, I had other challenges with regard to setting (which, in Ambergris is also history). First of all, I had to strike the right balance so that readers of prior books in the series wouldn’t feel like they were being told things they already knew, and new readers would have all of the context they needed to enjoy the novel without knowing anything about Ambergris. Second, Finch is set one hundred years after the prior book in the series, Shriek: An Afterword. Therefore, it has changed in fundamental ways and I felt there needed to be a moment where the frisson of that registered with readers of my other books–and so they would have the full context of those changes.

(At least I didnâ€™t have the problem of also having to summarize the actions of characters from the prior novel, because of the stand-alone nature of the Ambergris booksâ€”there is historical/political information the reader needs, but itâ€™s not a narrative taking up where the last book left off. The most elegant solution in such cases is the one used by David Anthony Durham in The Other Landsâ€”to simply include a preamble summarizing the action in the previous book, rather than try to interject unnecessary recent plot/history into the beginning of the next in the series, which bloats or slows down the new book– in a way the opposite of the potential problem with Russellâ€™s approach to The Sparrow.) 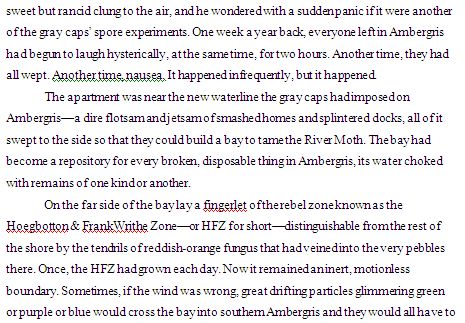 (Yet another approach, dropped, in which while Finch is leisurely walking to the crime scene, I get in some of the description that in the final version comes at the end of chapter 2.)

In early drafts, I tried two approaches. The first was to place a timeline for Ambergris history and a two-paragraph description of the current situation as a kind of prologue. Second, I did try putting description of the city upfront. Neither approach worked at all–indeed, both approaches made me much less enthusiastic about working on the novel. Why didn’t these approaches work? The novel is about John Finch. Any attempt by me to distance the reader from Finch betrayed not only the character but the novel. It is around the time that I abandoned the city-first approach that I also abandoned the title “The Appoggiatura of John Finch” and went simply with “Finch”. So, in this way too, my early drafting didn’t go to waste. In inhabiting and discarding approaches, I came ever closer to my final approach.