I haven’t had a chance to do more than mention in passing one of the major projects Ann and I will be working on in 2010: The Thackery T. Lambshead Cabinet of Curiosities, acquired by the wonderful Diana Gill at HarperCollins.

A loose sequel to The Thackery T. Lambshead Pocket Guide to Eccentric & Discredited Diseases–among other honors, a Hugo Award and World Fantasy Award finalist–this new anthology ramps up both the art and the storytelling, with full-page art, the delights of eccentric front and end matter, “exhibit” descriptions, and a core formed of full-on short stories.

Contributors committed to the anthology include Mike Mignola, China Mieville, Holly Black, Naomi Novik, Minister Faust, Alan Moore, Cherie Priest, Mike Moorcock, Tad Williams, Jake Von Slatt, Caitlin R. Kiernan, Jeffrey Ford, Carrie Vaughn, and Kage Baker. John Coulthart will be doing a lot of artwork for it. We’re delivering the cabinet, art and fiction, to HarperCollins in November 2010, for publication in 2011. We’ll post the full contributor list after we turn it in. Each story will be accompanied by art. (We wish we could have an open reading period, but it’s impossible given the targeted nature of the text, very specific needs, and a few other factors.)

More on the premise below the cut… 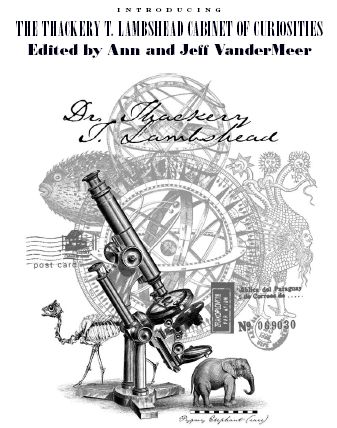 (Not the cover, but an image created by John Coulthart for the proposal.)

After the death of Dr. Thackery T. Lambshead in 2003 at his house in Wimpering-on-the-Brook, England, a long process of discovery followed for those assigned by his estate. For one thing, the great man’s house was in a catastrophic state of disarray, with letters to heads of state mixed in with grocery lists, major medical awards propping up tables or sticking enigmatically out of the many kitty litter boxes, and several thousand personal diaries shoved into random spaces in a library as shambolic as it was complete. Because of this disarray, it took caretakers until last year to unearth perhaps the most stunning find: a basement space lost under a collapsed floor, in which were found the remains of a remarkable cabinet of curiosities, much of it unfortunately ravaged by a fire or similar catastrophe.

Containing artifacts, curios, and keepsakes collected over Dr. Lambshead’s many, many decades, the remains of the cabinet of curiosities took months to unearth, document, and catalog. Several of the pieces related to anecdotes and stories in the doctor’s personal diaries. Others, when shown to the doctor’s friends, elicited further stories. In many cases, a partial catalog of items triggered valuable recollections and, working with trained artists, illustrations of items that were recovered in a damaged stage, or that simply no longer exist.

Thus, in keeping with the bold spirit exemplified by Dr. Lambshead and his exploits, we are now proud to present highlights from the doctor’s cabinet, reconstructed not only through visual representations but also through exciting stories of intrigue and adventure.

6 comments on “The Thackery T. Lambshead Cabinet of Curiosities”