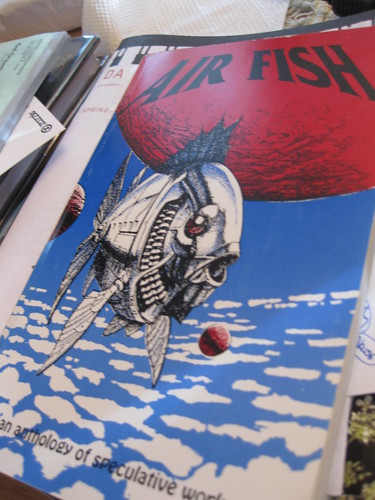 In doing research for a project, I came across my contributor copy of Air Fish: An Anthology of Speculative Works edited by Joy Oestreicher and Richard Singer. It was published about 17 years ago in 1993. For its year, I thought it was one of the stronger anthologies. Here’s the complete table of contents. I reproduce it here because I find an occasional “core sample” from the history of genre instructive at times, especially as we slouch toward 2010.

The particulars about Air Fish: It was a cross-genre, indie-press anthology that probably shared a lot in common with the now defunct(and always interesting) fiction magazine New Pathways, which itself shared points of view with the largely nonfic magazine SF Eye, one of the great lost mags covering genre fiction.

Much as CDs and downloads brought many albums back into wide release, I think anthologies like Air Fish provide a good argument for finding ways to bring back inexpensive PDF or print-on-demand editions of these ghosts lost to hardcopy history. (Assuming copyright issues can be dealt with.) 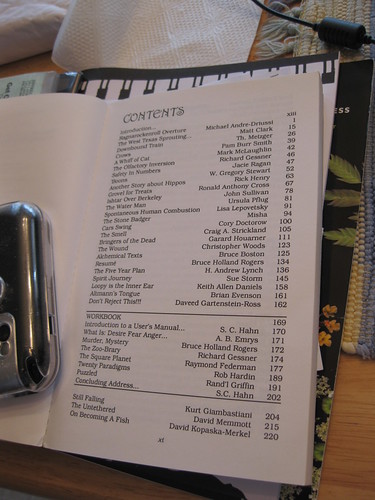 (Larger version of the image here.) 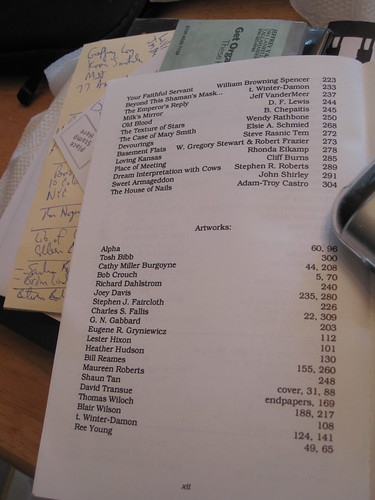 (Larger version of the image here.)

For me, this TOC is first and foremost…awesome. It’s jam-packed with talent. It also brings back nostalgia and “where-are-they-now” emotions, along with a recognition of fellow survivors.

Cory Doctorow and I went to Clarion East together in 1992. Brian Evenson and I met when our first books both went south with the same publisher around 1994. Misha, Michael Andre-Driussi, and Thomas Metzger were all writers I always felt I looked at from across a long hallway with an admiring nod. Jacie Ragan is a prolific poet with whom I had a correspondence via letter. I first encountered Ursula Pflug in this anthology, and subsequently published her in Album Zutique and elsewhere as a result. Bruce Holland Rogers would become one of my favorite writers.

Cliff Burns was, for a time, one of my best friends. Steve Rasnic Tem I knew of before Air Fish–had, in fact, published him in Jabberwocky in 1991–and still count as one of the best dark fiction writers out there.

John Shirley already had a heavy-duty career by then, and Adam-Troy Castro would get one. William Browning Spencer was championed by Gordon Van Gelder at St. Martin’s Press. Mark McLaughlin came up through indie press around the same time I did. Sue Storm, who I haven’t seen fiction from in several years, was a rising star at the time. Gerard Houarner I don’t think had books out yet, but has books out now. David Memmott has done great things as both a writer and as a publisher. t. winter-damon and D.F. Lewis have been indie press stalwarts, their surreal and wonderfully eccentric work having been published now for almost three decades.

Look at the artist list, too: early work from Shaun Tan; creators don’t just fall out of the sky fully-formed. The great surreal collage-ist Thomas Wiloch is also there, among others.

Which brings me to some specific questions…

—Would it have been clear to a reader in 1993 that “Jeff VanderMeer” by 2004 would have a publishing deal with Pan MacMillan and Bantam? Or even have books out at all?

—Could you have predicted Tan’s “The Arrival” from his image on the cover?

—Who, in today’s TOCs, are the equivalents of some of these writers career-wise or creatively?

—What are the creators I didn’t mention up to? How many of them are still writing? (Perhaps others can fill in the blanks.)