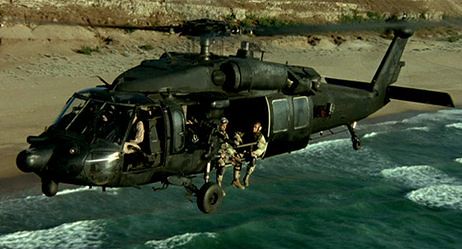 (What does a scene in the movie Black Hawk Down have to do with fiction? Read on below…)

In a general way, TV and movies have often had a terrible influence on fiction, in that some writers substitute received experience and received ideas from mass media for their own personal vision–some even think the structure of most TV shows is perfectly suitable, untranslated, for novels and stories. A lot of this material, reading like scripts or in other ways underwhelming, appears on editor slushpiles every day.

But there are also specific ways in which other media enhance and influence fiction. One example common to most fiction now is the cut-away from scene to scene, wherein you don’t get, for example, our hero or heroine driving from point A to point B. One reason that Lord of the Rings feels dated sometimes is because Tolkien doesn’t cut away for the most part, leaving in pastoral bits of quest that slow the pacing and don’t always resonate with a modern reader.

Then there are techniques from movies that you try to break down and truly translate into fiction. These techniques didn’t impact my prior novel, Shriek: An Afterword, because one secondary goal in writing that novel, due to its subject matter and dueling narrators, was to create a book that couldn’t be made into a film. But my latest novel, Finch, is meant to be cinematic–the beats, the structure, the visuals, at times mimic similar elements in film. There are experimental elements, but these elements are sublimated by the mystery plot.

In this context, I found one effect in Black Hawk Down fascinating, because I wasn’t at first sure how to convert it to a fictional context. Regardless of what you think of Ridley Scott’s film, the editing is precise and often brilliant. In one scene, attack helicopters are headed into Mogadishu–and in one sequence Scott (or his editors) cut the sound. The effect is to more or less leave the viewer lurching through the air. When I saw the film, my stomach seemed to drop when the sound cut off, and it was clear the filmmakers meant for the sudden absence of the noise from the helicopters to put you more directly into the scene–to in a sense turn film from a two-dimensional medium into something you were more immersed in. 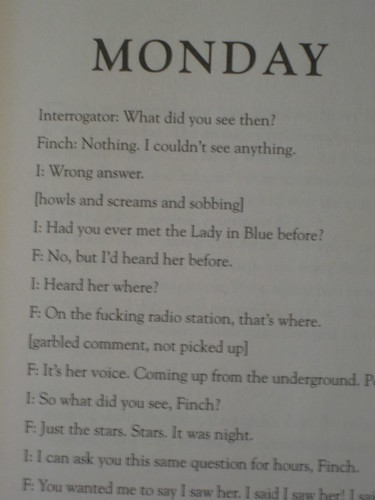 I liked the effect very much, and kept turning over in my mind how it could be used in fiction. The answer came while working on Finch. The novel is broken into sections corresponding to the days of the week. Basically, the novel covers seven extremely important days in the life of John Finch while he’s investigating two impossible murders in the occupied failed state of Ambergris.

Each day, as you can see above, starts out with a transcript of Finch being interrogated by an unknown person. Where, when, and how the interrogation is taking place doesn’t become clear until later in the novel. But the reader comes to expect the interrogation fragment when moving from section to section…except there’s one section title page, where the page is blank except for the day title…and the effect is meant to be the equivalent of cutting the sound in Scott’s movie. To bring the reader out of their expectation, to create a kind of lurch or surprise. At the same time, the totally blank white page where before there has been the expectation of dread is a strangely liberating experience. What does it mean for Finch? What does it mean for the chronology of the novel?

Now, this effect will not manifest for all readers. Some may even have treated the interrogation sequences as little more than epigraphs to that point. But, that was the intent: to suddenly pull the rug out from under, but unlike the unease caused by the sudden lack of sound in Black Hawk Down, it’s meant to convey more a sense of release, a sense of possible grace, of possible relief for Finch…although there’s always the possibility it just means he’s dead, the interrogation over.

I think there are probably more overt ways to translate the technique, but that’s how I used it in Finch.

Over the next month, I’ll be posting more pieces on technique pertaining to Finch. Posts that involve spoilers will be clearly marked. Next up will probably be a post on the use of past and present tense in the novel.

14 comments on “Finch and Black Hawk Down: Translating Technique from Movies to Fiction”