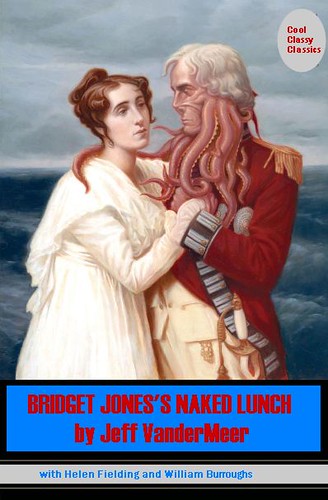 Here’s an excerpt. I plan to finish it next month and it’ll be published by February of next year. More details when I have them.

2 pkts heroin
14 cold new potatoes
2 Bloody Scaries (count as food because ectoplasm is good for you)
1/3 Ciabatta loaf with Brie
opium leaves–1/2 packet
12 Milk Tray (best to get rid of all Christmas confectionery in one go and make fresh start tomorrow)
13 rum and coke cocktails
Portion Una Alconbury’s turkey curry, peas and bananas
Portion slab of interzone-grade flabsteak, with the headcheese from some living tube worm I found hunching through the alley behind the flophouse; beautiful, but Iâ€™m hungry

Noon. London: my flat. Ugh. I can feel the heat closing in, feel them out there making their moves, setting up their devil doll stool pigeons, crooning over my spoon and dropperâ€”and the last thing on earth I am physically, emotionally or mentally equipped to do is drive to Una and Geoffrey Alconbury’s New Year’s Day Turkey Curry Buffet in Grafton Underwood. Geoffrey and Una Alconbury. As Uncle Geoffrey never tires of reminding me theyâ€™ve known me since I was running round the lawn with no clothes on.

But theyâ€™ll gibber and squeal at sight of me. The spit hangs off their chin, and their stomach rumbles and all their guts grind in peristalsis while they cook up, dissolving the body’s decent skin, you expect any moment a great blob of protoplasm will flop right out and surround the junk.

Even worse, my mother rang up at 8:30 in the morning last August Bank Holiday and forced me to promise to go. She approached it via a cunningly circuitous route.

“Oh, hello, darling. I was just ringing to see what you wanted for Christmas.”

“Would you like a surprise, darling?” Like a vampire bat she usually gave off a narcotic effluvium, a dank green mist that anesthized her victims and rendered them helpless in her enveloping presence.

“No!” I bellowed. All I knew was the fuzz had my spoon and dropper, and I knew they
were coming in on my frequency led by this blind pigeon known as Willy the Disk. “Sorry. I mean …”

“I wondered if you’d like a set of wheels for your suitcase.”

“I’ve already got a bag. And a heater that would singe your eyebrows into dead curling centipedes.”

I was thinking about all the pistols Iâ€™ve pounded flat to avoid the probing finger of prurient ballistic experts. Meanwhile, Mum was rattling on like some kind of slowly melting Dali watch that youâ€™d find in a secondhand shop.

“Oh, darling, you can’t go around with that tatty green canvas thing. You look like some sort of Mary Poppins person who’s fallen on hard times. Just a little compact case with a pull-out handle. It’s amazing how much you can get in. Do you want it in navy on red or red on navy?”

Down on the street, the few old relics from hop smoking times, spectral janitors, grey as ashes, phantom porters sweeping out dusty halls with a slow old man’s hand, coughing and spitting in the junk sick dawn, retired asthmatic fences in theatrical hotels, Pantopon Rose, the old madam from Peoria, stoical Chinese waiters never show sicknessâ€”they all strolled by giving me the fingers.

Mum stopped finally for a sec, so I said, â€œWhat’s with you? You wig already?â€ But then sheâ€™s already off on some other shit, like one of those dumb little junkies you see wandering round odd street corners.

“You know Julie, darling! Mavis Enderby’s daughter. Julie! The one that’s got that super-dooper job at Arthur Andersen …”

“Mum …” For now she was all-powerful in my ear. But eventually, Mum would be caught in the act of digesting the Narcotics Commissioner and destroyed with a flame thrower — the court of inquiry ruling that such means were justified in that Mum had lost her human citizenship and was, in consequence, a creature without species and a menace to the narcotics industry on all levels.

“Always takes it on her trips …”

“I don’t want a little bag with wheels on.”

“I’ll tell you what. Why don’t Jamie, Daddy and I all club together and get you a proper new big suitcase and a set of wheels?”

I tried again to change the subject, told her about my day: “Recollect when I am traveling with the Vigilante, best Shake Man in the industry. Out in Chi? So we is working in Lincoln Park. So one night the Vigilante turns up for work in cowboy boots and a black vest with a hunka tin on it and a lariat slung over his shoulder.â€

Exhausted, I held the phone away from my ear, because it was dripping some kind of white-and-green ooze.

When I put the phone on speaker she was saying: “… in actual fact, you can get them with a compartment with bottles for your bubble bath and things. The other thing I thought of was a shopping cart.”

“Well, my boys will be like that one day. Isn’t life peculiar? Even ectoplasm doesnâ€™t always hold.” I said it desperately, blinking in the dazzling Bank Holiday sunlight. â€œ

“No, no,” she said airily. “Now, darling,” she suddenly hissed, “you will be coming to Geoffrey and Una’s New Year’s Day Turkey Curry Buffet this year, won’t you?”

“Ah. Actually, I …” I panicked wildly. What could I pretend to be doing? “I think I might have to shoot up with a toothless old woman with cancelled eyes.”

“That doesn’t matter. You can drive up after. Or bring her with. Oh, did I mention? Malcolm and Elaine Darcy are coming and bringing Mark with them. Do you remember Mark, darling? He’s one of those top-notch barristers. Masses of money. Divorced. It doesn’t start till eight.”

Me, I was thinking about how it was time to stock up on H, buy a second hand Studebaker, start West, and get naked.