So, here’re details and the spiel about Last Drink Bird Head, but it’s a spiel for a good cause, so please read–and please spread this link through your own blogs. We’d love to sell out this hardcover edition well before publication and give ProLiteracy a nice check for the holidays. Thanks! (Also note that this is the first new project from my Ministry of Whimsy Press, marking a return from its hiatus.) – Jeff

What Is Last Drink Bird Head?

Pre-Ordering Makes You Feel Good Inside

Ministry of Whimsy, through Wyrm Publishing, has made the Last Drink Bird Head flash fiction anthology available for preorder at a $5 discount. All proceeds go to ProLiteracy, an organization that â€œchampions the power of literacy to improve the lives of adults and their families, communities, and societies. We envision a world in which everyone can read, write, compute, and use technology to lead healthy, productive, and fulfilling lives.â€ Please note that if you plan to attend the World Fantasy Convention, you can preorder now and pick up your book at the Last Drink Bird Head Party (details on the party below). While we will be selling the book at the party, we cannot accept paypal or credit card orders there, so if you plan to pay using one of those methods, preordering is your best option. Just note that you want to receive the book at World Fantasy and we will have it there for you.

Thursday eveningâ€™s opening festivities at the convention will feature THE LAST DRINK BIRD HEAD PARTY, beginning at 8:00 PM, and open to all (room number to be announced). Join Guests of Honor Ann & Jeff VanderMeer in celebrating the release of Jeff’s new novel Finch, the last in the Ambergris Cycle, his writing book Booklife, and especially Last Drink Bird Head. Copies will be for sale at the event, and over 20 contributors will be at the party to sign Last Drink Bird Head! All proceeds on Last Drink go to ProLiteracy.org., and 10% of all proceeds on Finch and Booklife will go to the 2009 World Fantasy Convention’s designated charity, Variety Childrens’ Charity of Northern California. Highlights will include Ann and Jeff giving out the 1st Annual Last Drink Bird Head awards, plenty of food and drink, and the chance to win a limited edition of Finch. Have fun and help some good causes at the same time. (Note: our primary purpose is to HAVE FUN and celebrate book releases. Even just blogging about the party and the antho would be a lovely contribution.)

During the party, Ann and Jeff will give out the first Last Drink Bird Head Awards, which they hope will become an annual event at World Fantasy. A panel of judges convened in Switzerland to decide on the winners using a complex series of criteria (more information at the party). Winners receive a LDBH trophy, a lovely certificate, and, probably, chocolate.

A Sneak Peek at the Anthology

Scott Eagle provided the distinctive cover art, Jacob McMurray of Payseur & Schmidt contributed the cover design for the dustjacket, and John Coulthart contributed the interior design as well as the stamp imprint for the boards. Here are a few details from the interior, along with snippets of text from some of the entries. 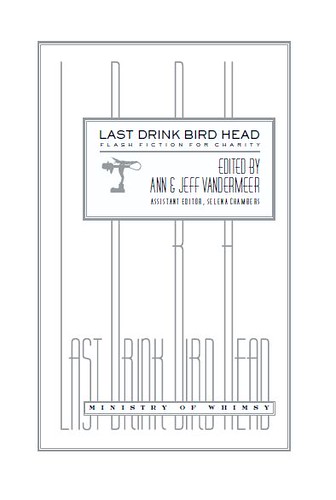 “Viewed from the side he looked normal but from the front it was clear his head was less than an inch wide across, as if heâ€™d been slammed from both sides by a steam-hammer.” – Steve Aylett 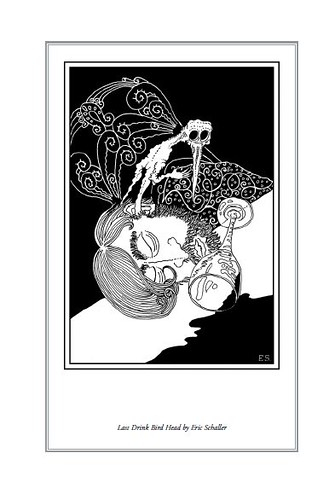 “Last Drink Bird Head didnâ€™t fit in at school. When the others were candles, she was lemons. When doors closed she was on the wrong side. She hated the flavour of milk and cellophane. When she jumped rope she was a merry-go-round horse with an orange face.” – K.J. Bishop 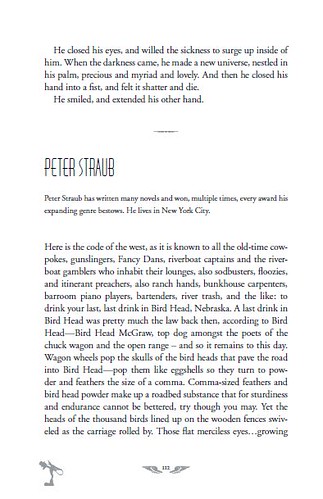 “Last Drink Bird Head lifts her iron beak from the dry-dust lakebed that lies white as parchment under the waning moon. She lifts her head, the long chain rattling, and looks at the moon; the moon looks back at the pitted earth and sees nothing but an iron figure bowing amidst a frozen iron crowd. She bows, lone and lonely, and the chain rasps down, its rattling sigh the only sound besides the dry-joint groans of Last Drink Bird Head herself. She bows, she bows.” – Holly Phillips 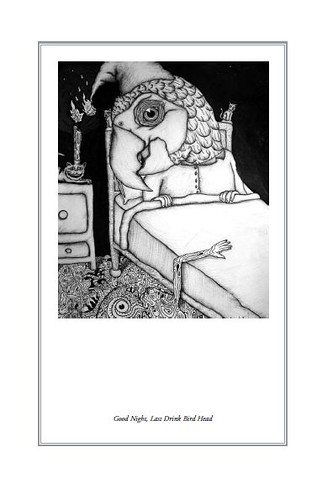 (By Derek Ford–credit appears in the finalized version)

â€œ’We can build another raft,’ Curve Handle Shiny Cone says. Cone has been hunting for crabs on the other side of the big gray rock, ignoring the splashes of the encroaching tide. Tiny False Log Cabin is huddled over the fire, poking the coals. Endlessly correcting, in search of the perfect flame. Last Drink Bird Head is lying on his back, his gritty forearm shielding his eyes.” – Richard Butner 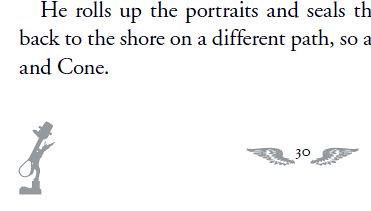 “â€¦certainly, far stranger things have been suggested regarding both his life and his works. And given the particulars of his short career, his involvement in the occult, and his penchant for cryptic affectations, it does not seem—to this author—so outlandish to ascribe to Albert Perrault a morbid sort of prescience or to believe that his presentation of Last Drink Bird Head upon the eve of his fatal motorcycle accident on the rue Cuvier was a carefully orchestrated move, designed to preserve his mystique ad finem. Indeed, it almost seems outlandish to believe otherwise…” – Caitlin R. Kiernan