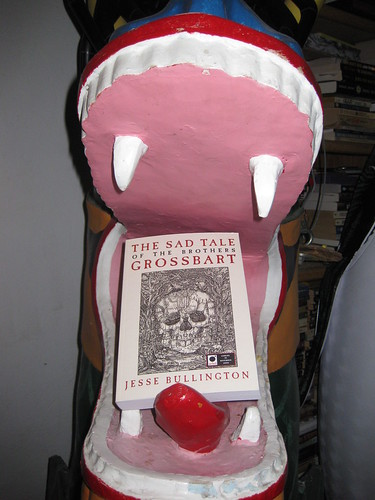 First of all, I want you to know that we will find out the truth.
If that were the case your first question would not be such a bald-faced lie.

What’s with the damn moustache?
This isnâ€™t the Sceptered bloody Isle, this is America, and in America it is not spelled â€œmoustache,â€ it is spelled â€œdandy whips,â€ and â€œitâ€ is â€œwith it.â€ I suggest you get with the same. Also, I wear a beard now.

Would you rather be dead?
Thatâ€™s how we know weâ€™re alive.

YOUR CHARACTERS ARE ALL BASTARDS. No?
Your characters all bastards. Yes? Ass.

Larry Niven said you like to wear a horse’s head and run through the mall. What the hell is wrong with you?
Larry Nivenâ€™s glass house is shaped like a super-intelligent pachyderm in a rocket ship, and if youâ€™re both still sore about the time I wouldnâ€™t buy you guys pretzels at the food court I suggest you find a more constructive way of dealing with it, like asking Jerry Pournelle to up your allowances.

Casseroles. Really?
No no no. Are people still talking about this? That was all supposed to be a joke, I donâ€™t know how the Hell it got so blown out of proportion. Anyoneâ€™s whoâ€™s been in my kitchen knows I have nothing but the highest amount of respect for Paula Deanâ€”there are plans in the works to veganize her ham-banana-cheddar-french-toast casserole.

You sick bastard.
Nice question, VanderMeer, real nice. Do you touch your mother with those fingers? We all saw what you did to poor Lev Grossman and it wonâ€™t wash, you hear? It. Wonâ€™t. Wash.

Witches or a sphinx?
At last the veneer of hipness begins to slip and we get to a serious, important question. Were it â€œaâ€ witch and â€œaâ€ sphinx then there would be no doubt as to the answer, but you, cagey as Barbara Walters, have caught me in your interview webâ€¦I suppose Iâ€™ll have to answer your question with another question: are these witches affiliated in some sort of coven, are they independent operators, or are they rivals? The sphinx Iâ€™ve got a handle on but until I receive some clarification as to what exactly you mean by â€œwitchesâ€ Iâ€™m going to have to delay my answer, other than to say if you mean â€œwitchesâ€ in the misogynistic Wicker Man remake sense of the word Iâ€™m a little ashamed to know you. And in that case Iâ€™d take a sphinx, because not even Nicholas Cage in a bear costume was defense against writer/director Neil LaButeâ€™s scary, scary women.

You don’t really know what you’re talking about, do you?
Says the interviewer who thinks heâ€™s interviewing Jesse Bullington.

When it comes time, toupee, bald, or surgically implanted snaps to keep your fake hair on?
Does itâ€¦does it show? Do you think mocking a manâ€™s legitimate hereditary condition is acceptable? Do you think the world will take being the butt of your jokes much longer? Do you think the comb-over is no longer a valid option?

You know this “book” you wrote is utter nonsense, right?
Well, obviously the problem is that youâ€™re holding it upside down. Here, let me get thatâ€¦see, the words go this way. Better?

Why’d you write stuff that’s so sick?
Because I am ill (laughs a dry, obviously forced chuckle that degenerates into a coughing fit, which eventually provides enough moisture for him to finish his embarrassing fake laugh. It takes some time).

Bible or Necronomicon?
Depends entirely on the brideâ€™s family, or the county in which the trial is being held.

Do you long for this to end?
Thatâ€™s how we know weâ€™re alive.

Mr. Bullington’s first stab at something approximating a novel will be released November 15. This has been In the Dragon’s Jaws. That is all. Go away.

8 comments on “In the Dragon’s Jaws: The Immaculate Interrogation of Jesse Bullington”