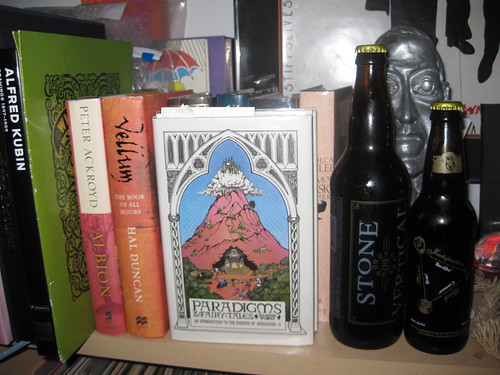 (So, like, what’s with the beer in the photo? Over on Omnivoracious, I’m soliciting suggestions for books to feature with Stone Brewing’s latest act of genius–said act included sending us two bottles of amazing beer. So, here, your fav nonfic crazy books. There, your fav books to pair with beer. Go to it, my peoples!)

I love eccentric nonfiction, in part because I get some of my funniest fictional ideas from such books. In the past, I’ve enjoyed the heck out of any number of slightly “off” texts, including a book on penguins where the author went off on long rants about misclassifications and the backstabbing that goes on in the penguin studies community. There’s something about eccentric nonfiction that points out the inherent absurdity of our situation as living beings. Which is to say, we establish these parameters for reality and we abide by them, the data reinforced by the evidence of our five senses and our brain’s ability to process and analyze information. We tell ourselves that certain things are more real than others—for example, chemistry is more real, based on more facts, as a branch of science than, say, a soft science like sociology. And yet, when it comes down to it, everything is still processed through our slightly illogical, definitely subjective, maybe-having-a-bad-day brains.

So, you wind up with a lovely subset of nonfiction that often reads like Kinbote from Pale Fire is your narrator. Sometimes this is because the writer is truly a bit cracked. Sometimes it’s because even a decade can turn a serious nonfiction book into…fiction.

Then, there are books that you can’t not take seriously and yet also seem full of crazy in the best possible way. For example, I’ve recently been reading the two-volume set Paradigms & Fairy Tales: An Introduction to the Science of Meanings by Julienne Ford (Routledge & Kegan Paul, 1975) 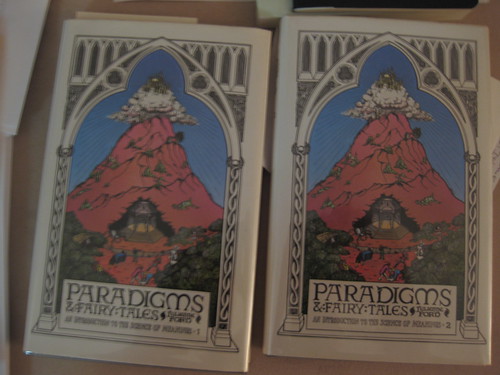 (An odd thing about these books—I cannot get them to photograph well, as if in objective reality, they’re blurry.)

Chapter titles, for example, include “I Beg Your Pardon,” “Advice from a Caterpillar,” “Rabbit on the Shopping List,” and “A Box of My Own Invention.” The text on the back cover describes these books as:

…an introduction to the epistemology and practice of social science which will be welcomed by everyone who is curious about or disenchanted with the current conventions of academic social science. The work may be read in a number of different ways, and serves various purposes according to the requirements of the reader. For the non-sociologist it provides an exposition and critique of the ideology and practice of social science, and an examination of the professional social scientist as a manipulator of ideas and appearances; his claims to expertise are exposed, and some rules for judging dialogues about social science “evidence” are suggested…more traditional procedures are treated alongside some bizarre new tactics…On yet another level, this work may be read as an allegorical fairy tale. It is the story of the rise and fall of a curious lapine civilization and of the fortunes of the devotees of a strange cult of mountaineering heroes who, even now, are regrouping for a new assault on the summit.

The introduction posits that science has actually driven us “further away from the homely comfort of knowing-that-we-know-what we know.” Exploration of inner and outer space with “rockets, spaceships, psychiatric techniques, and psychotropic drugs” has served “only to emphasize how blurred is the line between ‘phantasy’ and ‘reality’.” Thus, a subtitle in the intro of “What is Really Real?” followed by an extended excerpt from Lewis Carroll’s “The Hunting of the Snark,” a series of short conversations between an A and a B about reality, a photograph of a nebula, another subtitle of “Thought Is a Result of Thinking,” and a fairy tale about a tortoise. Chapter 1 includes a discussion of kept knowledge—“In our own common-sense terms these are bits of information about what things happen, how they happen, why they happen, and, of course, how to do all kinds of things from unarmed combat to Fair Isle knitting, and from having-a-baby to behaving-nicely-at-a-funeral”—and then ends with “Phew! What a lot of thoughts! I am sorry to say that we are about to find out that those are the sorts of things they keep in libraries.” The tone veers from the academic to the informal to the eccentric throughout. (I could go on, but the large version links to the pages below will give you additional opportunities to sample the text.)

Then, of course, there are the interesting illustrations, which almost give the text the feel of a book by Alasdair Gray. Take, for example, the curious endpapers: 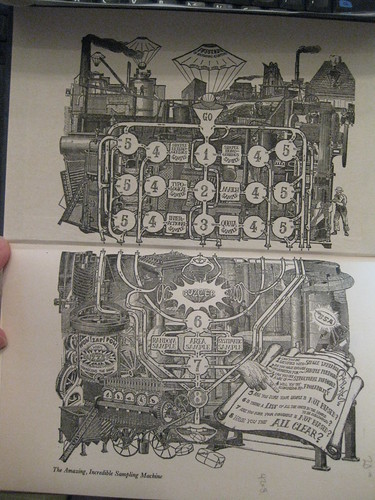 And how can I resist a mushroom made up of Rules of Reasonableness and Kept Knowledge? 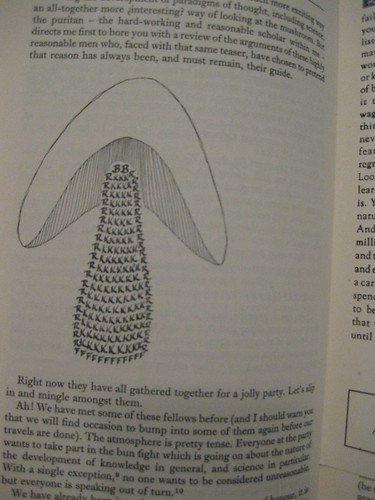 Or resist such decadent use of space as exemplified by this “diagram”: 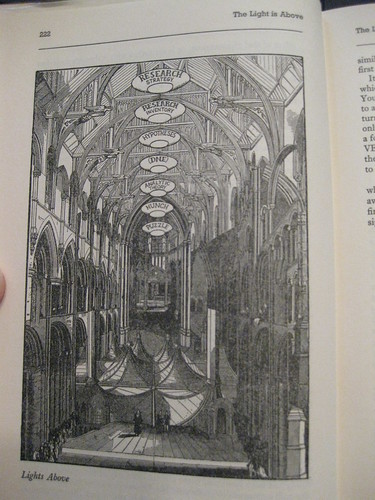 …And I always, always take advice from caterpillars. 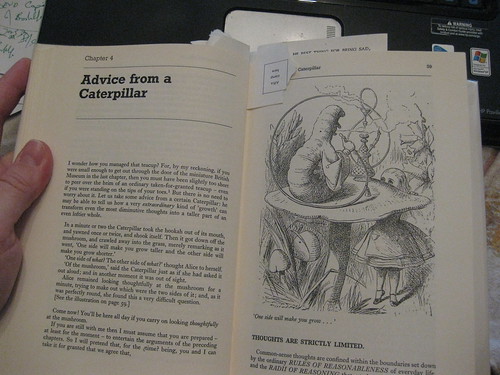 Rabbits, too, have been giving me advice for years, and I am still susceptible to their sibilant numbling speech. 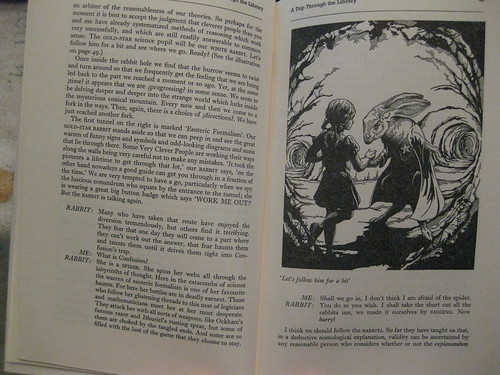 Perhaps my favorite bit of text on the rabbit page pictured above is: “We are very tempted to have a go, particularly when we spy the luscious conundrum who squats by the entrance to the tunnel; she is wearing a great big button badge which says ‘WORK ME OUT’!”

Now, I’m the first to admit that even though the book claims it’s accessible to the layperson, too, the author does reference and use as her foundations a lot of theory and a lot of context that is probably specialized knowledge, so that some of the seeming eccentricities come from gaps in my education—and it’s true that some of her approaches are used in books like Hofstadter’s Mind’s I: Fantasies and Reflections on Self & Soul. But the changes in tone, the touches of the personal, the stubborn intent to include fairy tales and other nontrad means of getting to meaning through extended metaphor and allegory…these things definitely give the books a strange and exotic feel. I’m not condemning the books for this—it’s why I am loving them so much, even when the text seems to go down a rabbit hole. Sometimes, they read like teachings from an odd alternate universe. They also display a deeply perverse sense of humor and nonlinear imagination. I’m already finding my brain processing bits and pieces into mulch for parts of a long story I’m working on called “Komodo.”

So now that I’ve rambled on, let’s get back to my question: What are your favorite eccentric nonfiction books?

P.S. If you want to explode your mind, read Paradigms at the same time as Derek Raymond’s The Hidden Files…