(Photo by Ellen Datlow; this was during Waldrop’s cloning/”similarity of atoms” phase, which also involved dry ice, a magician’s wand, a taxidermed poodle, and two Tylenol.)

Below find the details about the Jack Trevor Story Memorial Cup, won by Howard Waldrop. This is the second time I’ve served on the selection committee, and it’s a real honor. You’ll recall that I wasn’t blogging or on Facebook for about 72 hours a couple weeks back. That was so the cup administrators could bundle me onto a plane bound for Paris, to participate in the final deliberations. It’s definitely a whirlwind event, and I apologize to my friends in Paris–judges are sworn to secrecy and, anyway, there’s so little time actually on the ground. As soon as you reach the airport, you’re put into a town car and driven off to the Lâ€™Horizon, there to spend an afternoon drinking beer and coffee in equal measure while discussing the possible results. (This year, too, for some kind of fashion shoot Moorcock had to bring all of his awards with him, and this cause a bit of a stir, mostly because of his wife Linda’s cursing, and extended the deliberations.)

Anyway, we all agreed that Waldrop was a worthy winner, and as usual it was worth the fuss of travel to see the other judges and catch up with them. (Lisa Tuttle showed us her new set of num chucks!)

Finally, some have seemed puzzled by the condition that “the money be spent within two weeks and the recipient have nothing to show for it by the end of that period,” speculating that this could be cause for either rampant frivolity or stoic responsibility on the part of the recipient. Given that Waldrop must submit a fifty-page detailed report about his expenditures, evidence will be forthcoming.

The committee awarding the Jack Trevor Story Memorial Cup for humorous writing this year presented the cup to an American for the first time.

The Cup was presented to the winner by Michael Moorcock during a special ceremony at the Doubletree Inn Hotel, Austin, Texas on Friday 14th August 2009.

The usual conditions will apply: that the money be spent within two weeks and the recipient have nothing to show for it by the end of that period. This recalls Storyâ€™s remark to a bankruptcy judge when asked what had happened to money from his films The Trouble with Harry and Live Now, Pay Later: â€œYou know how it is, judge. Two hundred or two thousand. It always lasts a week to a fortnight.â€

A regular columnist for The Guardian during the 1960s and 1970s, Story also contributed to Punch, The Evening Standard, Sexton Blake Library, The Listener, The New Statesman, New Worlds and many other journals. Milton Keynesâ€™ Writer in Residence, he wrote series for TV and radio as well as many other films and died in 1991 at his typewriter, having written â€˜THE ENDâ€™ to his final novel Shabby Weddings.

Previous winners of the JTS Memorial Cup include Fred Normandale and Steve Aylett. 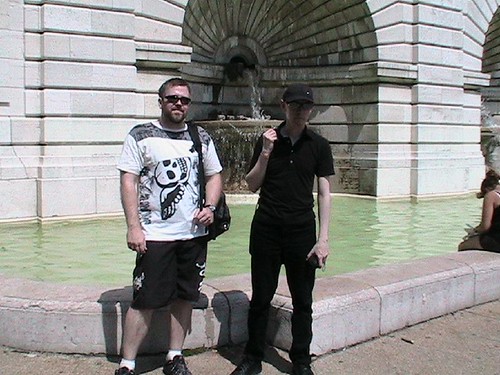 (Me ‘n’ John Coulthart in Paris, in the aftermath of the last JTS Memorial Cup deliberations, with Aylett taking the prize.)