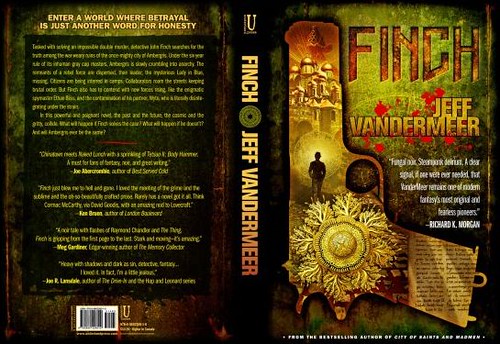 (The full cover of the trade paperback edition of Finch, by John Coulthart. The same art will be used by Murder by Death for their CD soundtrack to Finch.)

First off, Underland Press has posted a lengthy excerpt of Finch on their site–specifically, the first 58 pages. Click on “READ FREE EXCERPT”.

Underland Press has also announced the two limited editions of my novel Finch, shipping in November. They are:

Each edition comes with the Murder by Death soundtrack for Finch. The band picked up on “a few scenes or ideas” from which to compose the music, including mushroom houses, a band playing at a blackmarket underground party, and elements of a dream about the fortress of Zamilon, among other elements.

From there, though, the editions diverge. Check out the links, or see below for more information, with close-up detail of the dustjacket images. Please note that they do ship overseas–contact victoria at underlandpress.com for shipping costs.

Ambergris completists should note that about four hundred words of the chapbook, in greatly altered form, graced the illuminated manuscript cover of the original hardcover edition of City of Saints. Indeed, in looking back over Finch, Shriek, and City of Saints the past couple weeks, I’ve noticed all kinds of synergies between them that reflect the fact I was working on some stage of each at the same time. Inevitably, bits I thought were meant for Shriek went into City, or went into Finch, or bits intended for Finch went into Shriek or City. It creates rather more connectivity than I’d even intended, in a good way.

Description:
An exciting noir thriller set in a fantastical city. The final, stand-alone installment of the critically acclaimed Ambergris Cycle: â€œTasked with solving an impossible double murder, detective John Finch searches for the truth among the rubble of the once mighty city of Ambergris, a metropolis unlike any other in or out of history. Under the rule of the gray cap masters, Ambergris is crumbling into anarchy and rebellion. The remnants of a rebel force are demoralized and dispersed. Partialsâ€”human traitors transformed by the gray capsâ€”walk the streets brutalizing the cityâ€™s human inhabitants. In this powerful and poignant novel, the past and the future, the cosmic and the gritty, collide. What will happen if Finch uncovers the truth? What will happen if he doesn’t? And will Ambergris ever be the same?â€ 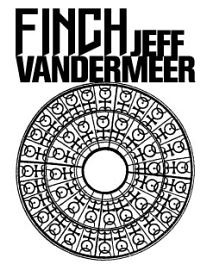 The Rebel Samizdat Edition of Jeff VanderMeer’s Finch comes with:

– A signed custom letterpress printed jacket and foil stamp designed by John Coulthart
– The instrumental soundtrack CD â€œFinchâ€ by Murder by Death, in custom sleeve
– Lady in Blue rebel radio messages on the front flap of the jacket
– Incoming spy transmissions from the half-human Partial collaborators on the back flap
– The back cover of the jacket provides additional information on the Rebel Samizdat edition, including details of its dual creation in Ambergris and in Portland, Oregon. Special properties of the book cited include its propensity to emit a poison if readers attempt to access secret documents sewn into the spine. 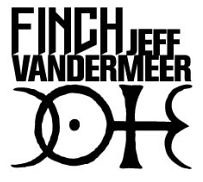 â€œHeretic walked toward the back, holding his skery. Rivulets of golden spores swirled up from his footfalls. Sparkled in the murk like tiny blinking eyes.â€

The Heretic Edition of Jeff VanderMeer’s Finch comes with:

– The instrumental soundtrack CD â€œFinchâ€ by Murder by Death, in custom sleeve
– A signed custom letterpress printed jacket and foil stamp designed by John Coulthart (the jacket design is different from the $50 limited version)
– Each jacket includes unique, never-published lines cut from the novel and handwritten on the jacket by Jeff VanderMeer. (This text is different for each of the 150 copies.)
– The flaps and back cover of the jacket will include text pertaining to the inhuman underground gray caps, and excerpted from the journal of the mysterious Samuel Tonsure.
– The back cover of the jacket provides additional information on the Heretic edition, including details of its dual creation in Ambergris and in Portland, Oregon. Special properties of the book cited include its propensity to explode into spores if attempting to tamper with the cloth binding.
– City of Saints & Madman artist Eric Schallerâ€™s infamous war beer label, highly prized in Ambergris for its nostalgic connotations of a time before the gray caps Rose. 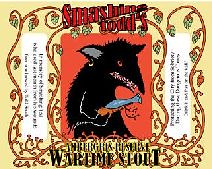 – A supplemental chapbook containing seven thousand words of the original â€œFragments of a Drowned Cityâ€ novel that eventually became Finch, with brief introduction by the author. This material, polished and of high quality, constitutes an â€œalternativeâ€ version of the novel that differs completely from Finch as written. The chapbook will not be released in a further printing, and is only available with this limited edition. Here’s a short excerpt:

In a sense, the detective had only ever had one Caseâ€”a case that changed as to the participants and situations, but which remained immutable in its essential nature. If the detective had a memory, it was of a peculiar kind that allowed him to absorb his prior experiences to such an extent and so densely that it almost qualified as a kind of prescience: an instinct lodged in the hindbrain, it allowed him to extrapolate from clues toward final solutions, but did not afford him the luxury of his own memories. No matter what he forgotâ€”and it was this which comforted him about the Clientâ€™s journalâ€”or assimilated or rejected, the journal remained absolute. Through it, he could lead a normal sort of life despite his abnormal circumstances. At his own pace. Whenever he desired, and not before.

Samples of Advance Praise for Finch:

Richard K. Morgan: “Fungal noir. Steampunk delirium. Paranoid spy thriller, quite literally, on ‘shrooms. There’s enough nightmare and grit in Finch to stock any urban fantasy fan’s darkest imaginings for years to come…and his visionary brand of imagining is closing on Burroughs at his best. Devastated post-war cityscapes, desperate temporary allegiances of the soul, and creatures dragged up out of the worst withdrawal hallucination you can possibly imagine–like something Len Deighton might have written at the top of his game, if he’d dropped a tab or six beforehand…a clear signal, if one were ever needed, that he remains one of modern fantasy’s most original and fearless pioneers.”

Stephen R. Donaldson: “I can’t remember ever reading a book like Finch. Audacious in technique, and extravagant in imagination, it has the rare quality of making the macabre poignant. In the midst of a disturbed and disturbing narrative landscape, Jeff VanderMeer gives us deeply sympathetic characters–especially Finch himself–who inspire us to care about their flawed and tyrannized world. I’m impressed.”

Ken Bruen: â€œFinch just blew me to hell and gone. I would have sworn you canâ€™t unite noir and fantasy, and oh how gloriously wrong Jeff VanderMeer proved me to be. Finch is a detective unlike any youâ€™ve encountered and is utterly compelling. He is faced with a double murder that you shake your head, goâ€¦.youâ€™re done Finch. Not quite. I loved the meeting of the grime and the sublime and oh so beautifully crafted. Rarely has a novel got it all. Think Cormac McCarthy, via David Goodis, with an amazing nod to Lovecraft and still that doesnâ€™t quite capture the spell this novel casts from the off.â€

Joe R. Lansdale: â€œWow, what a cool novel. Heavy with shadows and dark as sin, detective, fantasy…Hell, I loved it. In fact, I’m a little jealous.â€

Meg Gardiner: “Jeff VanderMeer’s hardboiled detective novel plunges readers into vividly realized world of invasion, betrayal, and intrigue. A noir tale with flashes of Chandler and The Thing, Finch is gripping from the first page to the last. Stark and movingâ€”it’s amazing.”